Are You Ready For the Ultimate African Adventure?

Challenge4ACause, our annual fundraising cycle event in the Namibian Desert, is an epic expedition into one of the remotest corners of the world. Over the course of six days, the riders tackle the rugged and starkly beautiful landscape and camp in places that we have exclusive access to.

And we want you to join us this year!

If you do, you’ll contribute to the conservation of Damaraland’s critically-endangered black rhino. The rhinos here are unique due to their ability to live in the desert conditions. You’ll be travelling through its hauntingly beautiful backyard, with potential sightings of rhinos and other wildlife adding to the excitement of a day’s ride.

To get a taste of what awaits you in the desert – the stirring landscapes and the physical demands of the Challenge itself – watch last year’s superb video.

Your involvement will make a massive difference to three non-profit organisations! Save the Rhino Trust Namibia is dedicated to protecting the critically endangered desert-adapted black rhino and its habitat. Wildlife ACT work tirelessly to protect the endangered species such as the painted dog and the black rhino. They have collared and monitored 50% of the painted dog population in South Africa. And Good Work Foundation is an NGO that empowers rural communities through online learning and is looking to reach 100,000 learners by 2020. 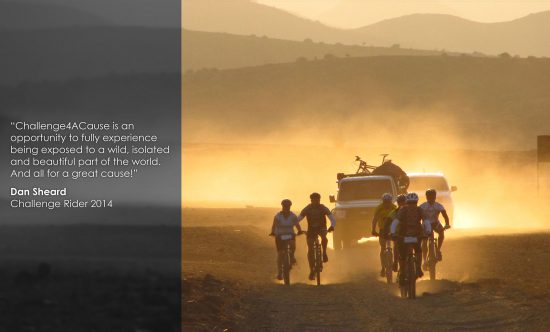 On the brand new Challenge4ACause website, you will find a detailed itinerary of the trip that describes the course of each day, frequently asked questions, a map and the sign-up form. For more information on Challenge4ACause, visit their website here.

To find out more about contributing to something bigger than yourself while seeing Namibia in a unique way, watch an inspiring video about this rewarding experience.

Challenge4ACause started back in 2009. Now in its eighth year, the Challenge has grown from strength to strength over the years. The ride through Namibia’s desert has such a strong allure and leaves such a deep impression on the riders that many riders have returned to do the Challenge for a second or even a third time. You can read about past Challenges by clicking on these links;
2009 – The inaugural 2009 Damaraland Challenge
2011 – The 2011 Challenge4ACause video
2012 – Cycling to save our rhinos
2013 – Challenge4ACause – In Photos 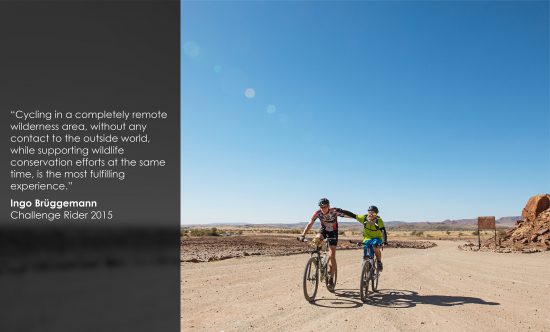 Challenge4ACause is very close to all our hearts at Rhino Africa and one of our most passionate projects that we are involved in. As our Founder and CEO, David Ryan, says, “Challenge4ACause is our chance to give back to the wildlife and landscapes from which we make a living. Without Africa’s precious wildlife there would be no tourism industry in Africa.” We urge you to get involved, experience one of the beautiful and wild places of Africa, and help us make a difference to the future of Namibia’s rhinos. SIGN UP NOW

Last year we held two seperate rides to accommodate everyone who wanted to participate. Namibia’s winter normally has days in the high twenties (Celsius) which makes the ride possible through this remote landscape. If you would like to see pictures of last year’s Challenge4ACause, you can see a gallery of the images by clicking on the photos below;


The riders have returned and these photos prove how tough and exciting Challenge4ACause 2015 was!The annual event sees…