The Best Festivals in Southern Africa

When it comes to experiences, the southern region of Africa offers more than splendid landscapes and majestic wildlife. A hub of culture and diverse artistic expression, it’s home to exciting festivals that rival any in the world. From the kings and queens of jazz and rock to the giants of pop music and culture, all can be found at these outstanding festivals in Southern Africa:

Dubbed “Africa’s Grandest Gathering”, this annual music affair is the largest of its kind in sub-Saharan Africa. Known for its line up of the best up-and-coming and established acts from all over the world, it draws a diverse international audience to the gorgeous city of Cape Town each year. Last year’s event attracted around 37 000 people who watched 41 performances across five stages on two nights. Artists such as the late Hugh Masekela, Erykah Badu, Thandiswa Mazwai and Earth, Wind & Fire have graced this legendary stage, making it one of the most prestigious music festivals in Southern Africa.

The next Cape Town Jazz Festival will take place in March 2019.

If you’re planning on popping in for this music extravaganza or more, you might want to download our Cape Town restaurant guide, for all the best eating spots the city has to offer.

A gathering with a difference
Photo credit: Sarah Duff/ CNN

Once a year in the Stonehenge Private Reserve in the Karoo region of the Northern Cape, an assortment of colourful personalities come together for a truly unique festival experience. A temporary city of art is created, where themed camps, costumes and performances are the order of the day. A regional version of the famous Burning Man festival (though owned and managed by a different organisation) it champions participation, generosity and community among other principles and is run on a gifting economy. In the “do-ocracy”, attendees are encouraged to build something, dance, sing and contribute to the festival activities themselves. Over the course of week, artworks are erected and burnt in epic infernos. Last year 10 000 participants from all over the world took part in this cultural exchange and at the end of the week, as per tradition, everything was packed up and the landscape left as it was before.

The next AfrikaBurn is expected to take place in March 2019.

The small landlocked kingdom of Swaziland, which lies between Mozambique and South Africa, hosts one of the most renowned music festivals on the continent each year. 20 000 local and international revellers gather at House on Fire for the three-day event which encompasses film, theatre, poetry and visual arts performances as well. This event draws big African names such as Mafikizolo, Khuli Chana and legends Salif Keita,  Ladysmith Black Mambazo and other stars of South African indigenous music and proceeds are donated to NGOs and charities in the country.

This year’s Bushfire is from 25-27 May, with next year’s dates still to be announced.

The crowds along the main stage
Photo credit: Zethu Gqola

This colourful gathering is one of the most beloved in the South African festival scene. Rocking the Daisies draws over 25 000 indie music lovers, free-spirits, hippies and cool kids to Cloof Wine Estate, about an hour’s drive from Cape Town, each year. Across themed stages, pop, rock, hip hop and electronic music artists entertain while imaginative fashions, stands and enthralling activities abound. Last year’s lineup – Black Coffee, Ray Phiri, Beatenberg, Flume and more – is indicative of its diversity of acts. Having partnered with the organisation Greenpop, the festival lessens its impact on the environment by using a grey water filtration system for irrigation on the venue’s farm. Vendors are also required to use environmentally friendly packaging to minimise waste.

This year’s Rocking the Daisies takes places on 5-7 October 2018.

If you’re coming down to the mother city for the festival, or any of the top things to do in Cape Town, be sure to check out these luscious cape hotels for your stay. 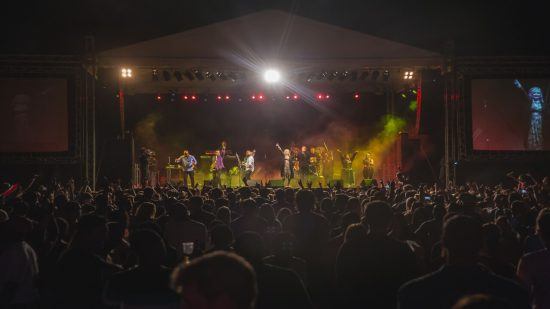 Three days of entertainment, performances and activities are what the Vic Falls Carnival is all about. Dubbed the “train & secret bush party”, each year pleasure-seekers hop on-board for more than just a train ride but an immersive musical experience. Travellers from all over the world join artists – from DJs, musicians, traditional dancers, acrobats and more – to countdown to the New Year near one of the seven wonders of the world, the Victoria Falls in Zimbabwe.

For the 6th year running, the carnival inspires attendees to dress in African fabrics and journey through the African bush, past lions and elephants, and to a secret location in the Vic Falls wildlife park for an unforgettable party with various DJs on the decks. Black Coffee will headline the 2018 event which also includes a host of parties at various local venues, activities such as water rafting, bungee jumping and other adventure packages and a unity concert on the final night, featuring acts from all over Africa.

This year’s Vic Falls Carnival, one of the most epic festivals in Southern Africa, takes place from 29 – 31 December.

If your curiosity is piqued, check out our complete guide to Zimbabwe and this breakdown of the reasons why 2018 is the year to visit Zimbabwe.

Celebrating its 24th year, Oppikoppi returns in August under the theme ‘nomakanjani’. Held every year in Limpopo Province South Africa, near the town of Northam, it evolved from a mainly rock event to a multi-genre one featuring acts from the world of jazz, house, hip hop and more. The festival features mostly South African acts – though international ones are included – and draws more than 20 000 attendees for a packed weekend. With a lineup that includes Bongeziwe Mabandla, Fokofpolisiekar, Sho Madjozi and Bam Bam Brown across various stages this year, it is undoubtedly one of the most anticipated festivals in Southern Africa.

This year’s festivities will happen from 9 August to 11 August.

Experience the Best Gorilla and Chimpanzee Trekking Adventure in Rwanda

Why Botswana Should be Next on your Bucket-List in 2021

The Great Migration: Safari in Style