5 Reasons Why You Should Make Madagascar Your Next Holiday

It’s wonderful to revel in the peculiarities of nature. While Africa provides these opportunities in abundance, one destination stands head and shoulders above all others, Madagascar. From towering mountains to idyllic islands, all teeming with endemic animals, this is an exotic sanctuary that is unparalleled to any other place in this world.

For those seeking a holiday with a difference, away from the usual attractions, here are the reasons you should add Madagascar to your travel bucket list.

Madagascar is located to the east of Africa in the Indian Ocean and became an island between 80 and 100 millions years ago when it split off from the Africa/Indian supercontinent. While it is the world’s oldest island, it also ranks as the world’s 4th largest island too with an enormous array of varying terrain, landscapes and unique animals.

If you have seen the Madagascar movie, then you are familiar with King Julien’s song and the curious lemurs of this island. These animals are unique to Madagascar and probably the biggest wildlife draw-card. With over 100 different varieties of lemurs, their cheeky personalities and animated appearance will have you falling in love with them instantly.

The chameleon is another fascinating creature found here. Madagascar is home to half the world’s chameleon species with varieties ranging from the size of a fingernail to over 68 cm in length. This island also offers the possibility of swimming with the world’s largest fish. Between the months of September and December, Whale Sharks gather around the northwestern island of Nosy Be to feed. These docile and gentle giants are easily spotted from the surface and, posing no threat to humans, they allow swimmers and divers incredible close-up experiences.

Since separating from the mainland, Madagascar has developed its own cosmos of wonderful and peculiar creatures. It’s home to over 200,000 different wildlife species and more than 10,000 plant species, of which over 90% of these are found nowhere else on earth!

Madagascar is 2,000 km long and has almost 5,000 km of coastline making it the ultimate beach-lovers paradise. Many of its beaches are breathtakingly beautiful, uninhabited and surrounded by endless, emerald forests. Turtles regularly visit the beaches, particularly on Nosy Iranja, and dolphins and whales revel in the warm, clear water of this wonderland. You can even take a kayak and explore some of the small, neighbouring islands. Those who love kite-surfing can explore many great options around Madagascar including the beaches around Anakao as well as in Sakalava Bay, in the north of the island. 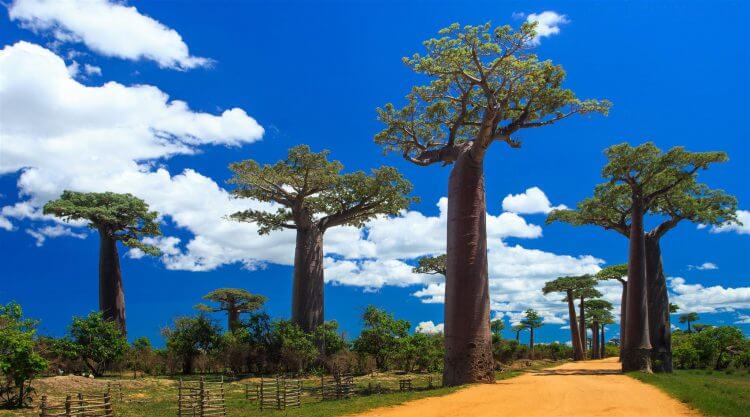 One of the reasons Madagascar is a bucket-list destination is because of it’s diverse experiences on offer and the scenery is one of them. Lush forests, towering mountain ranges, dry bleached salt pans and remarkably strange rock formations all found on this one incredible island.

The Avenue of the Baobabs, or Baobab Alley, is a striking collection of ancient trees that line a road in the west of Madagascar. Here you can find over 25 trees, most over 30meters (100ft) tall, standing like long-lost sentinels over the land.

Probably the most striking of all is the alien-like landscape of Tsingy de Bemaraha National Park. Here, approximately 200million years ago, the limestone seabed was pushed upwards which, over time, has been eroded creating a prehistoric-like “forest” of sharp limestone needles.

5. The Culture and History

Apart from the island’s amazing scenery and animal life, Madagascar is also a melting pot of diverse cultures and traditions. With more than 18 different ethnic groups, the Malagasy culture is a blended mix of African, Arab and Indian origin with some of the friendliest locals in all of Africa. They wear traditional dress called ‘lamba’ and the combination of their demeanour, their vivid attire and varied culinary influences makes for an incredibly complex, layered cultural experience.

Madagascar is a hidden gem of an island, waiting to be explored and experienced. Let us show you this special piece of paradise and make your dream African holiday a reality. Contact our Travel Experts today.

When Is The Best Time to Visit The Maldives?

When Is The Best Time to Visit The Maldives?

Born and raised in Johannesburg, Luke ventured to a small town in the Eastern Cape, Grahamstown, where he studied at Rhodes University. Clearly not having studied enough, he then completed a finance degree just for fun - who even does this? Luke is passionate about travelling and was lucky enough to work in the USA for almost 2 years. However, his love for Africa was too strong and he returned home and moved to the spectacular city of Cape Town to pursue a career in the travel industry. Having once been a competitive swimmer, Luke can often be found doing laps in the pool. He is, however, a general fitness junkie and can be found doing anything from cycling, running, mountain biking, triathlon, tennis, squash or anything that gets the heart rate up.