Time to dust off the Spandex – Challenge4ACause set to hit Damaraland

In the north west of Namibia the coastal dunes of the Skeleton Coast run for hundreds of kilometres, from the Swakop River in the South up to the Angolan border and beyond. Inland from the coast the huge dunes become vast plains and then dry valleys, gorges, hills and eventually mountains. This spectacular semi-desert wilderness is Damaraland. It is one of Namibia’s most scenic areas, an enormous, untamed, ruggedly beautiful region.

It is through Damaraland that the charity, Challenge4ACause, hosts their annual cycling event. To the uninitiated the event can seem ludicrous – cycling 330kms through a desert that is renowned for its unforgiving terrain and harsh climate. Make no mistake it is a gruelling week of riding but it is a special privilege for the riders to cycle through the incredible terrain which is accessible to only a handful of people each year.

Challenge4ACause was started in 2009 by Rhino Africa Safaris to give their team, customers and members of the travel industry the chance to give back to a continent that has been exceedingly generous to them. The primary purpose of Challenge4ACause is the conservation of Africa’s endangered wildlife. Participants get to undertake a personal and physical challenge and raise funds and awareness for a noble conservation project.

Rhino Africa’s CEO, David Ryan, explains, “The motivation behind cycling across the unforgiving desert is to protect the desert adapted black rhinos that call Damaraland home. It is our chance as an industry to give back to the wildlife and landscapes from which we make a living. Without Africa’s precious wildlife there would be no tourism industry in Africa.”

The proceeds of the event will go to Save The Rhino Trust which works to conserve the black rhinos of Damaraland, The Wildlife Act and the Good Work Foundation. The work of each of those charities is incredibly important and we urge you to have a closer look at what they do or donate to the causes here.

On the 27th of June 16 riders will start their 6-day epic cycle across Damaraland, with another team starting on the 25th of July. They will cross rock-strewn dirt tracks, sandy ravines and steep inclines and all this amidst the searing heat. Good luck to everyone riding – we can’t wait to see your sun-scorched, blistered bodies and hear your incredible stories when you get back! 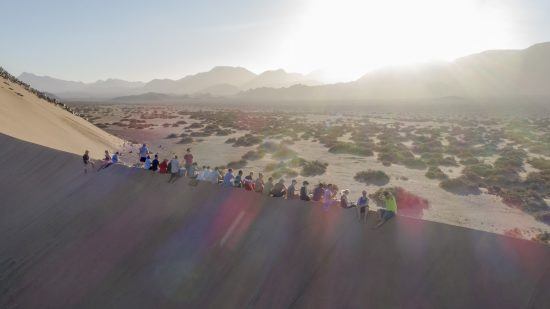