Elephants, bats, whales, salmon, turtles, reindeer and even manatees brave the forces of nature to embark on migrations that test the strength of each herd, pod and family ensuring the brutality of natural selection takes its toll year after year without fail or hesitation. But one African adventure has been singled out from the herd as the mightiest and most magnificent migration of them all – The Great Migration. 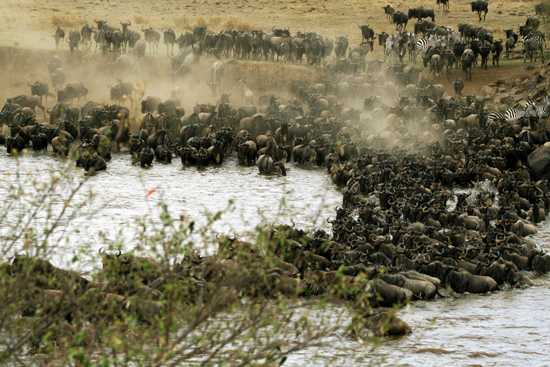 The wildebeest of East Africa – pronounced Vil-De-Bee-Ast by the locals or Gnu by the rest of the world – spend their lives on a clockwise merry-go-round visiting the Serengeti Plains of Tanzania and the Masai Mara Game Reserve of Kenya, attempting to cheat death on a daily basis. On no given year will you find the herds grazing the African savanna in the same spot – the rains and natural instinct dictate the course and pace of the migration.

Though for the unfortunate wildebeest, blessed with awkward, Quasimodo-like looks and a stunted intelligence – relying on instinct alone can lead to disastrous consequences as they risk life and limb to cross the croc-infested rivers of the Masai Mara. So addled are these creatures that they will often cross back and forth on the same stretch of river in search of greener pastures. 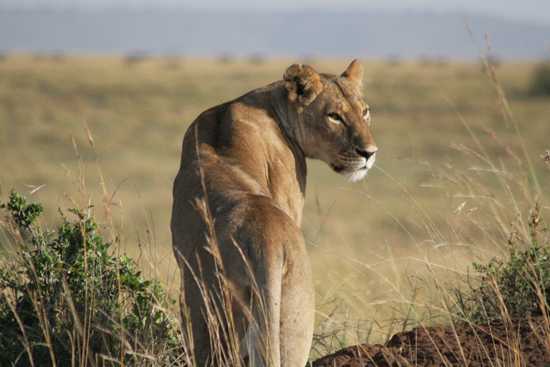 The Great Migration – famous for the more than 1.5 million wildebeest that turn the plains black – includes cameo appearances from several thousand zebra and the occasional Thomson’s gazelle. In fact, when I have witnessed the migration it has been the wildebeests’ striped friends that have led the stampede across the river as the cowardly wildebeest hang back. If only we could credit them with working out that the crocodiles will be full by the time it is their turn to dive in. 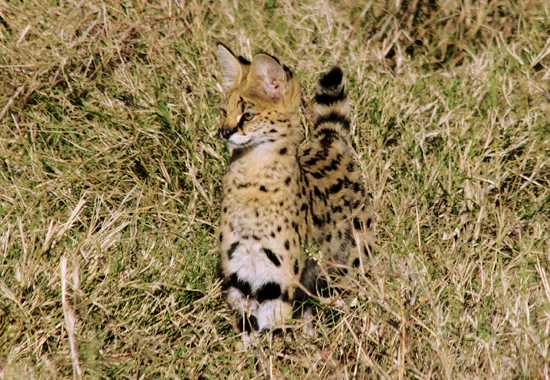 For the local lions, cheetahs, hyenas, crocodiles and even the elusive leopard, the annual stampede is like a Christmas feast. They gorge themselves to the point where they can do nothing but sleep it off under an Acacia tree and hope another scavenger doesn’t steal the leg they’ve been saving for their Boxing Day sandwiches. Those of you avid safari goers will understand when I say I was extremely lucky to see three kills in six days. Those of you who aren’t will think I am an atrocious person and question why I work for a company promoting conservation in Africa. But seeing a kill is seeing nature at its rawest and most pure and gives a genuine appreciation of both prey and predator. 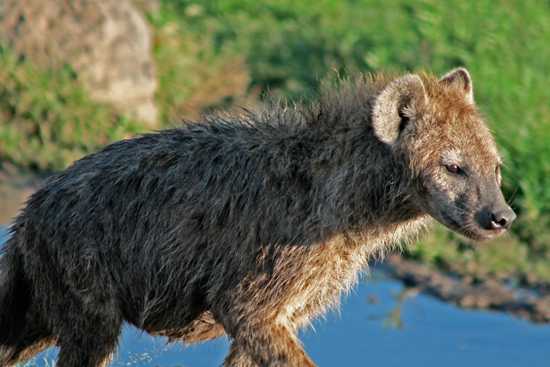 The first predators that we spotted were a pride of lions. We spotted them with our binoculars lying in the middle of the plains a little way off from the edge of one of the big herds – there is little need for tracking and analyzing each flattened blade of grass in search of animals in East Africa. By the time we got there the head of a lioness peered just above a dusty termite mound with her bright orange eyes transfixed on a wildebeest that had failed to move on with the herd as he enjoyed what must have been a particularly tasty patch of grass. So good it seems, he would die for it. 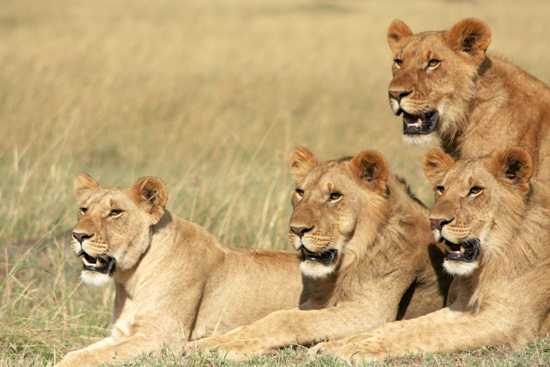 Within a few moments, the sub-adults of the pride had caught on to what mum was doing and assumed the position. Midday, under the blazing heat of the African sun – lunch time. Mum crept forward, low to the ground, each pad of her gigantic paw placed meticulously down without a sound and her eyes never losing sight of her ultimate prize. From the cover of the the grass on the far side, a second lioness appeared, sprinting towards the isolated animal at full speed. It was clear what this was – a well executed ambush as she flushed the unsuspecting wildebeest straight into the jaws of the first lioness still crawling patiently through the grass. Game over. 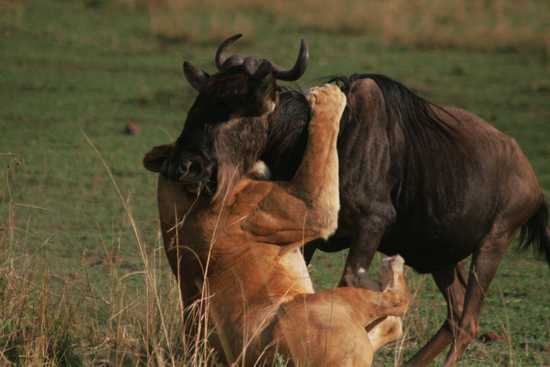 The lioness leapt out of the grass as the wildebeest fled from the other lion. She locked onto his neck and dug in before the sub-adults raced forward to take part in the final moments of the kill. However, the wildebeest did get one last triumph. After moments of no movement he struck out a free hoof connecting with a massive clunk to the forehead of one of the young males. But it was too late. Death was inevitable.

The other two kills were from Cheetahs but we all know how that goes…120km/hr over 500m, some agile tackling and dinner’s on the table. 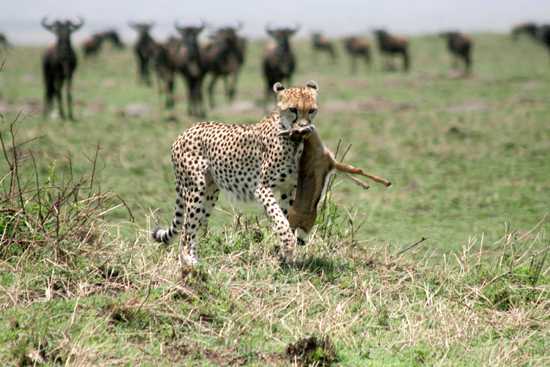 The highlight of a trip to see the The Great Migration is in fact seeing the migration itself. There is no guarantee that the herds will not have either moved on or not yet reached the particular lodge that you have chosen to host your African adventure. If you are lucky enough to catch the herds or choose a mobile camp that follows the migration, then once again, disappointment may be on the cards for those with hearts set on viewing a stampede of wildebeest across the river. Contrary to the expectations of many travellers, the crossings are not a continuous event and require significant patience among large crowds –and a full cooler box – to give yourself a fair chance. I once waited seven hours, just in case you don’t believe me. However, if you can brave the heat of the day, camera set for when that first zebra (never wildebeest) steps its hoof into the water and sets in motion one of nature’s greatest events on Earth, you will be in for the experience of a lifetime. 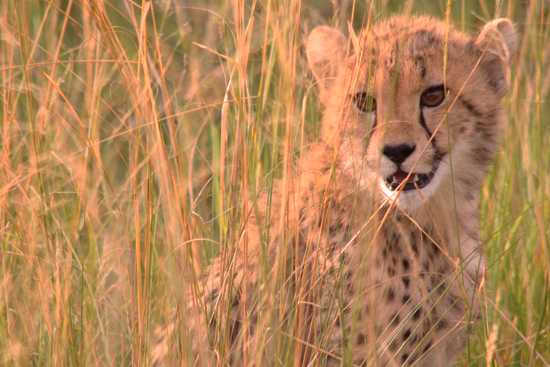 I have said before that Africa is about the overall experience. Tales in the bush over a G&T, understanding and appreciating the skill of tracking a leopard through the bush and letting yourself succumb to the ultimate African fantasy. For some reason, perhaps due to the ease of finding animals, I sometimes feel the magic of the bush is lost on an East African safari compared to its Southern African cousin. And unless you’re staying within the National Parks, you’ll be required to leave by 6pm, but you will get to spend an entire day on a vehicle venturing as far afield as your heart desires. I took this as a challenge and loaded up our vehicle with beer and biltong before embarking on a 12 hour safari on which we must have seen every animal on show, including two river crossings as we watched the herds move on in their never ending journey through East Africa.

Planning a trip to East Africa can involve even more complications than the average safari holiday. To ensure that your itinerary gives you and your friends and family the best chance of seeing The Great Migration in Africa contact one of our travel experts. With expert knowledge and first-hand experience, your trip of a lifetime may not be so far away!