The Fight and Plight of Zululand’s Endangered Vultures

Our carefully placed impala carcass lies on the open plain, on the other side of a gully, two hundred metres in front of us. We sit in our bakkies to escape the heat and squint across the searing savannah, waiting. Red dragonflies hover over our bonnet while the vultures we are seeking soar high above us, out of sight. Before long, the vultures start to appear. First we see one, a moment later there are three, and then are 30 above us. Pretty soon it looks like Heathrow’s airspace on Christmas weekend.

We eagerly watch through binoculars as the vultures land and approach our bait. This is the crucial moment. We’ll have very little time to catch them once one is caught in the trap. We hold our position – and our breath – and urge a vulture to make the mistake we want. One vulture hops forward and immediately does just that. Someone in another vehicle shouts, “Go! Go! Go!” The three vehicles shoot off, rushing to the scene, bouncing like rodeo riders across the rugged terrain and come to a skidding stop close to the vultures. The conservationists jump out, scamper to the carcass and quickly, yet cautiously, take hold of the vital creature. We have one, but time is of the essence now. Our task has only just begun.

We are in Zululand, in South Africa’s southeastern region, with members of the Zululand Vulture Project. The number of Zululand’s vultures have plummeted in recent times. In as short as fourteen years, almost 70% of Zululand’s breeding pairs of vultures have disappeared. Even for conservationists dealing with a range of critically endangered species, that’s a shocking number. But why are they disappearing so quickly, and what can be done about it?

What is the Zululand Vulture Project?

Chris Kelly, the lead vulture expert at Wildlife ACT, quickly manoeuvres a blindfold over the vulture and walks it briskly to the back of the car and out of the sun. The Vulture Project team is made up of conservationists, vulture experts and registered vulture ringers. Each one has a specific role to play in the crucial moments when the vulture is under their care.

One person assesses the feather condition and measures the bird – wingspan, beak, head and tail – and calls out the measurements to someone taking it down on a clipboard. Another person takes DNA through a blood sample while another prepares the GPS system that will be attached to the vulture, like a small backpack. It’s a small example of the teamwork that is needed to carry out this immense project. Collaboration, I am told by all involved, is the key to the project’s success. The Vulture Project is a joint endeavour between three organisations: Ezemvelo KZN Wildlife, Endangered Wildlife Trust and Wildlife ACT.

The project was started in 2006 to monitor the vultures of Zululand to better understand their behaviour and improve the chances of saving them. The three tree-nesting vultures that have been affected are the African White-Backed, Lappet-Faced and the White-Headed Vulture.

While the monitoring is vital to their survival – it allows us to better understand the routes these birds are using, foraging areas, roosting spots, and also to determine the survival rate of youngsters – the reason for their rapid decline needs little science. 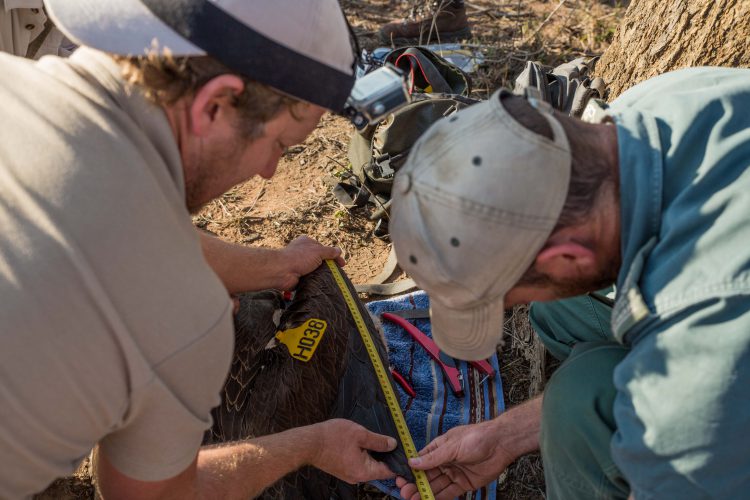 Why are the vultures disappearing?

While their loss of habitat has been a big reason for a slow decline of vulture populations over the decades, the recent drastic drop is due to one reason – poison.

Ben Hoffman, a raptor biologist from the African Bird of Prey Sanctuary in Pietermaritzburg, explains, “The locals have a superstition that vultures can see into the future. Their heads are sold at the traditional markets to satisfy the demand for this belief.” It’s the vulture’s uncanny ability to quickly find carcasses which has created this belief.

“They say that vultures find their food because they’re clairvoyant, that they actually dream where their food is going to be. One minute you look up and there’s no vultures in the sky and the next minute there’s 20. So if you have a muthi made from the vulture’s head the witchdoctors believe you’ll be able to dream the lotto numbers or who’s going to win the football or who’s going be the next politician. Also, if you give it to your kid he can dream the school questions for the next exams. This belief is not limited to just this region. It’s universal.”

Despite their incredible stomachs (vultures stomach acids are 100 times stronger than humans and can handle almost anything the natural world throws at them), they’re no match for the poison. Carcasses are laced with poison and dragged into an open area which are naturally devoured by the hungry birds above. The result – scores of dead birds within hours. Ben is well aware of the seriousness of the situation, “It’s a massive worry. We’ve got populations of white-headed vultures that are down to seven or eight pairs in the whole of Zululand. It’s very scary.”

As scavengers, vultures are important members of ecosystems where they control disease outbreaks by keeping the veld clean of rotting carcasses. “They’re like the clean-up crew, the municipal garbage guys. Without vultures the spread of disease is much bigger, they’re immune to so many diseases,” Ben says. It can, therefore, be said that vultures, like hyenas, can be used to measure the functioning of the ecosystem. Zululand vulture tagging efforts are therefore essential. 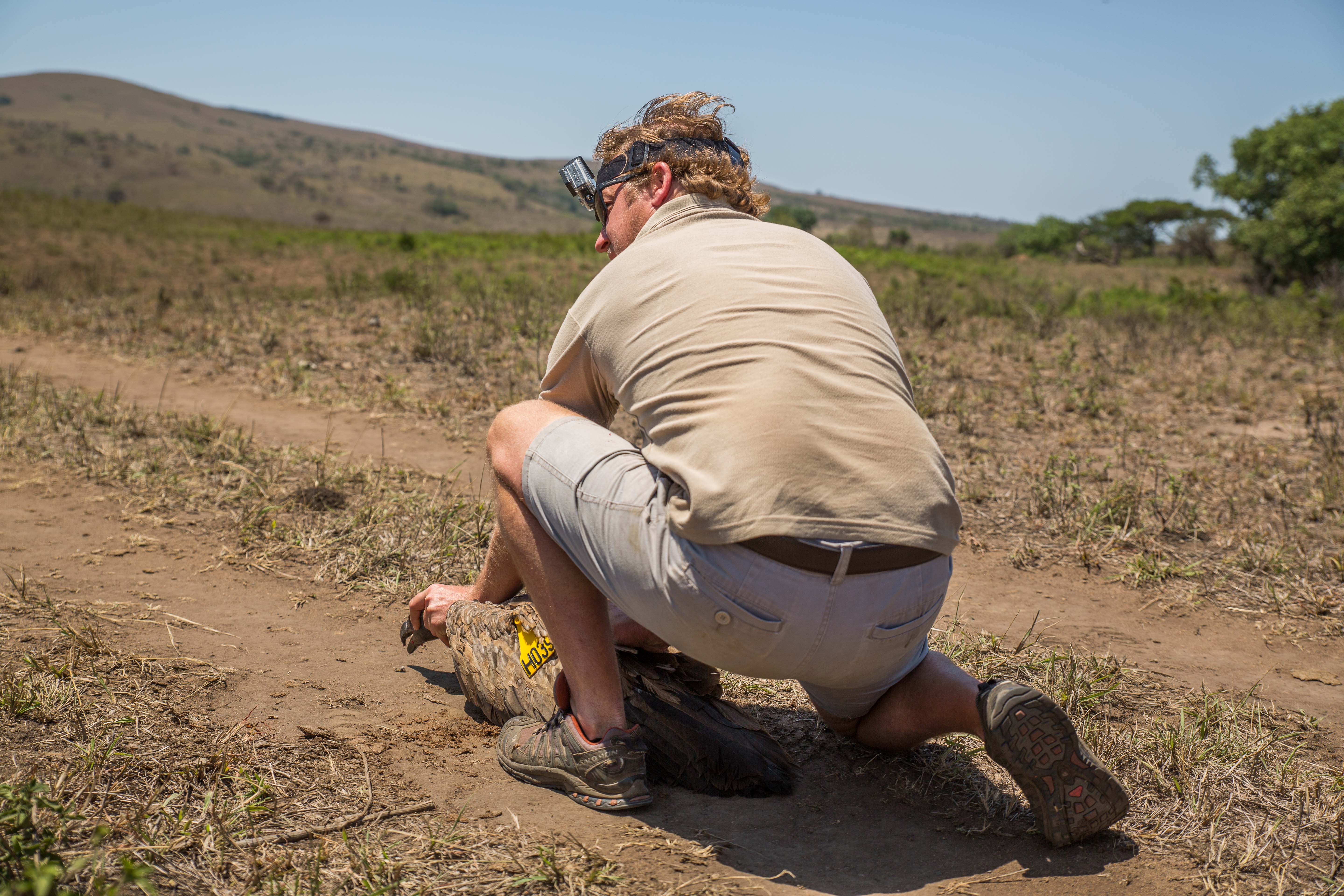 The future of Zululand’s vultures

One thing seems clear – if the poisoning continues, the number of Zululand’s vultures will continue to diminish. The knock-on effect for the ecosystem is too daunting to consider as it would have serious and far-reaching ramifications for all wildlife in the region and beyond – the vultures nest in Zululand but fly as far north as Zimbabwe and Mozambique.

Despite the severity of the situation, there is not much public interest and the conservationists who make up the Zululand Vulture Project may be the only ones who care enough about this issue to do something about it. It seems that they might be the last hope for these incredible birds of prey. The team is well aware of this and are exploring all possibilities of tackling this complicated problem. Once they have done enough research they will be able to publish their findings, which would hopefully spark interest from the media and general public.

“We need to get more tracking devices installed and would love more sponsors. We’re also forever trying to innovate so we can get more units out there as the devices are phenomenally expensive. Wildlife ACT help make this all possible and if it wasn’t for them we wouldn’t be doing this project,” Ben says.

Crucially, the team is aware that simply monitoring the birds will not change the poaching situation. It’s towards this tragic practice that their efforts are starting to turn. Tackling the muthi trade is a complicated and mammoth task, but the work these men are doing will hopefully result in shining some light on this issue and ideally ensure the survival of these crucial birds.

Ten minutes after initially being caught, the bird is set to be released. The measurements are done, DNA taken, identikit clipped on and GPS attached. Chris carries the bird to the front of the car and faces it against the wind, the direction in which vultures prefer to take off.

He kneels down carefully, announces he’s about to let it go and then does so, taking the vulture’s blindfold off and stepping back. The vulture immediately shoots off, instinctively flapping its two-metre wingspan and takes one, two, three steps and then it’s off. We stand with our hands shielding our eyes from the sun and watch the vulture track a wide circle, flying up into the pool-blue sky and, finally, disappearing from our sight. 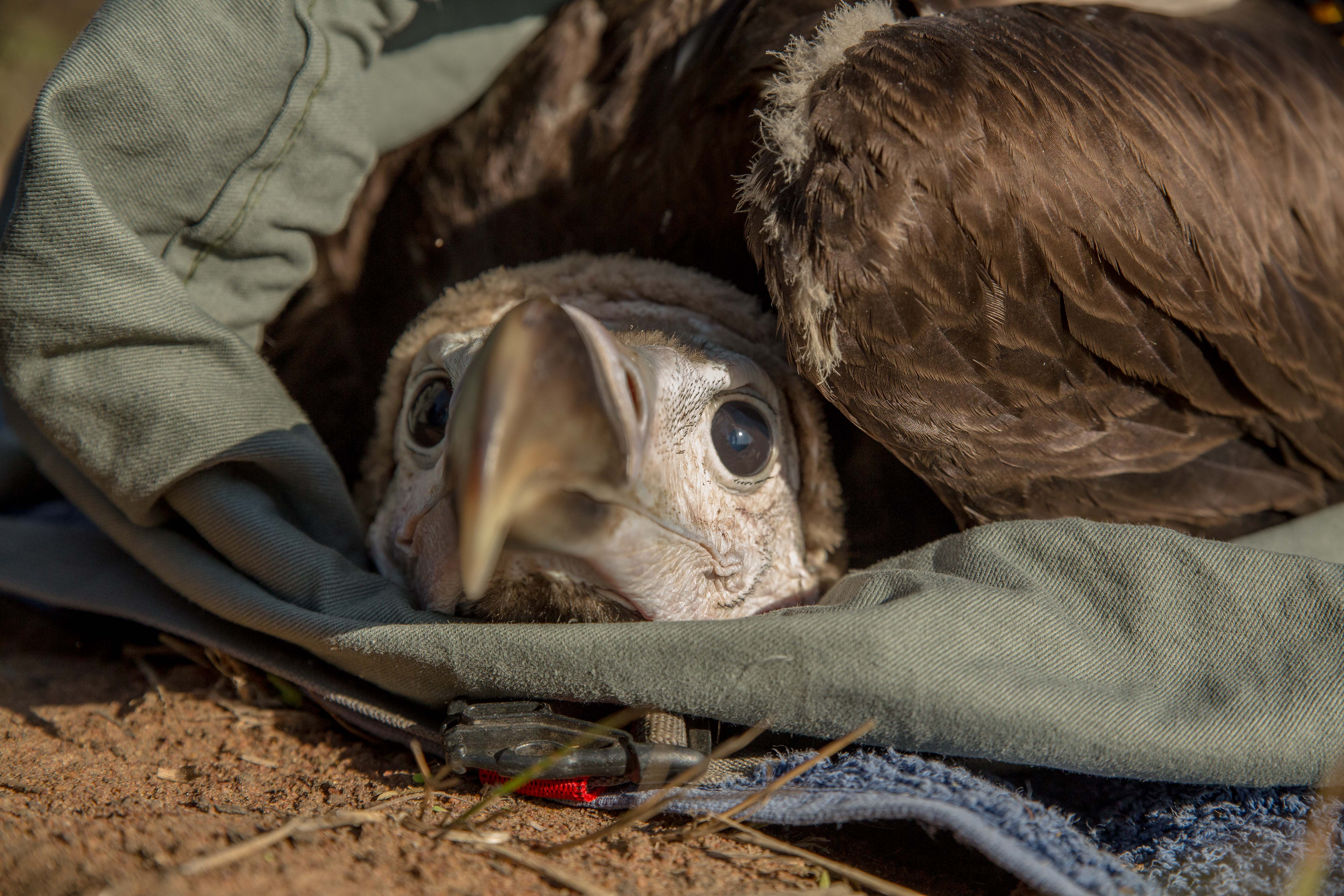