The Cape Peninsula reaches out like an elongated claw at the bottom of the mighty beast that is Africa. Surrounded by great oceans, gale-force winds, ancient mountains and fire-dependent plants, could there be a place that is more brutally elemental than South Africa’s Cape Point?

A Natural World Heritage Site, Cape Point is historic and, some even say, haunted. It is a birder’s rich escape and a botanist’s holy grail. It can seem absolutely fascinating to those with a keen eye, or, to the less curious, simply a finger of land jutting out into the ocean 60kms from Cape Town. Ultimately, though, it is one of nature’s great places. This is why.

The windiest place in South Africa

When we visit Cape Point it is a typically blustery day. Weather at the end of the earth is seldom agreeable. Clouds roll off the point like steam from a speeding locomotive, and the tip of our continent looks like a train attempting to drag us south.

The wind feels like it comes from the south pole, strong and crisp. It certainly is pure, some of the cleanest air in all of Africa according to the local laboratories, which use Cape Point as a base to measure the air that has passed over the southern Atlantic Ocean.

Cape Point is the windiest place in South Africa and experiences only 2% of all hours in the year with calm conditions. The average wind speed is 25 km/h with 42% of the wind speeds greater than 30 km/h.

The most south-western point of the African continent 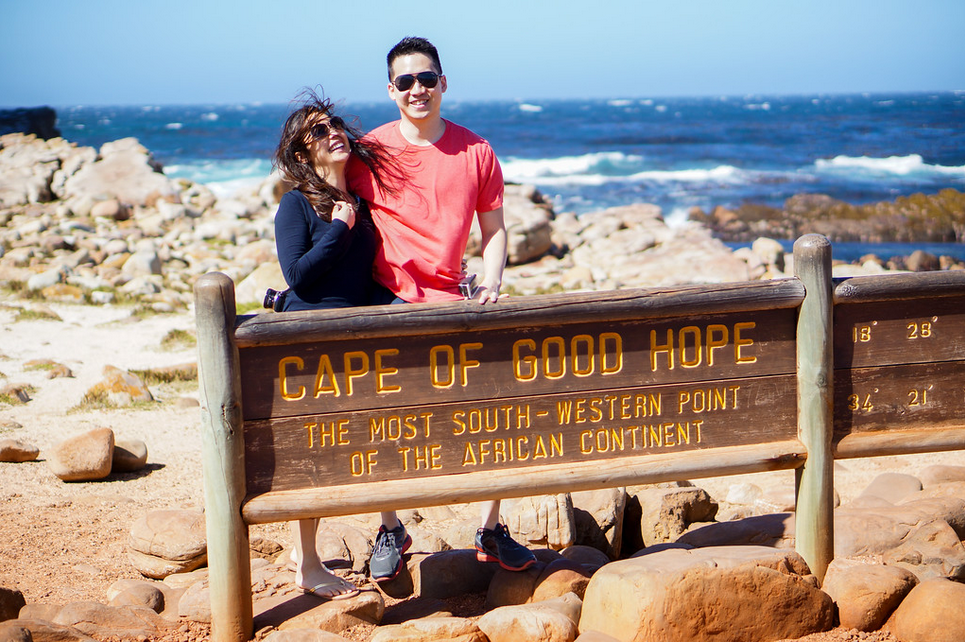 The signboard announces the Cape of Good Hope as, “The most south-western point of the African continent”. The most southern point belongs to a near neighbour, Cape Agulhas, 150kms to the east.

It was initially called the Cape of Storms due its devastating toll it took on the Portuguese explorers who attempted to round the Cape in the 1600s and 1700s. Eventually, however, it came to be seen in a different light. After the inhospitable Skeleton Coast of endless dunes and no water sources in Namibia, Cape Point became a symbol of hope. There was fresh water here and vegetables too, vital resources for the sailors. The chances of getting to India, their final destination, were now greatly improved. And so the Portuguese king renamed it Cabo da Boa Esperança, the Cape of Good Hope.

A meeting of two oceans (sometimes)

Cape Point is famed as the meeting point of two oceans, the Atlantic and the Indian Oceans, (the restaurant at Cape Point is even called Two Oceans) but this is not technically correct. The currents of the two oceans meet at the point where the warm water Agulhas current meets the cold water Benguela current and turns back on itself—a point that fluctuates between Cape Agulhas and Cape Point.

The indigenous floral kingdom, fynbos, is dependent on fire for its existence and success

For a botanist, Cape Point is a rich playground. With 1080 species, the reserve boasts one of the highest concentrations of plant species for similar sized areas in the world. The tiny area has more plant varieties than all of Britain.

With fynbos, the indigenous flora, fire is essential for maintaining the ecosystem and requires regular burning. Fynbos thrives on infertile soils and fire is the mechanism that recycles precious nutrients from old moribund growth into the soil.

Fires are more common in fynbos than in any other heathlands in the world.

If you want to appreciate these plants, one of just six floral kingdoms in the world, the delight is in the details. As a signboard at Cape Point says, “Look closely to appreciate the perfection of the tiny flowers”.

Interesting Fact: Many popular garden plants such as lilies, freesias, irises and geraniums, have their origins in fynbos. 14 plants are endemic – this means that they are found at Cape Point and nowhere else in the world.

Cape Point is home to an array of different animals but due to the vegetation, there are not large herds. Mongooses, chacma baboons, porcupines, bontebok, zebra, eland, ostrich, grysbok, leopard tortoises, chameleons, lizards, and snakes such as boomslangs, cape cobras, puff adders can all be found here.

Spectacular concentrations of small shoaling fish make Cape Point one of the best areas in the world to observe ocean birds. Seafaring birds spotted at Cape Point are albatrosses, gannets, petrels, gulls, cormorants and oystercatchers.Birds of prey include the African goshawk, black eagle, rock kestrels and owls but most exciting of all is the peregrine falcon. The peregrine falcon is the fastest bird in the world and can reach speeds up to a whopping 280km an hour when striking its prey.

The piercing, ice-blue water of Cape Point looks like it comes straight from the antarctic, and if you go for a dip it can feel like it too. These waters contain some of the world’s great fish and mammals. Stingrays, dolphins and seals often provide food for everyone’s favourite villain of the sea, the great white shark, which is common in this part of the world and the surrounding waters provide the stage for its famous breaching. Orcas, humpback whales and southern right whales also visit the surrounding bays.

Some more informations for the visitors of Cape Point

Cape Point makes for a great day trip from Cape Town, as the hordes of tourists attest to. So arrive early to allow for easy access and limited waiting. The lighthouses and cliff faces are not the only attraction and a wide range of activities are on offer. You can picnic, hike, mountain bike, surf, kitesurf and even go on overnight hikes. A well-kept secret is that Cape Point has some of Cape Town’s best beaches and it’s a great idea in the busier summer months.

This takes visitors from the parking lot up to the lighthouse for a view of the bay and peninsula. Alternatively, visitors can walk up the small hill which will take about twenty minutes. It is named after the legendary ghostship which is said to lurk in the nearby waters.