Walk on the Wild Side in Kruger: Rhino Walking Safaris

I marvel at the sky. I’ve spent the past 15 minutes watching it morph from a midnight-blue to a deep purple before blooming into a glowing orange. This is dawn in the Kruger National Park and I’m about to witness the sun make its lazy ascent over the horizon. The air is fresh as I inhale, not yet having lost its crisp early-morning edge to the bustle of the day. Our ranger from Rhino Walking Safaris has assured us that this is a superb time to catch sight of the park’s nocturnal wildlife – especially its predators – as they gradually wind down and head toward a daytime slumber after a night of hunting. 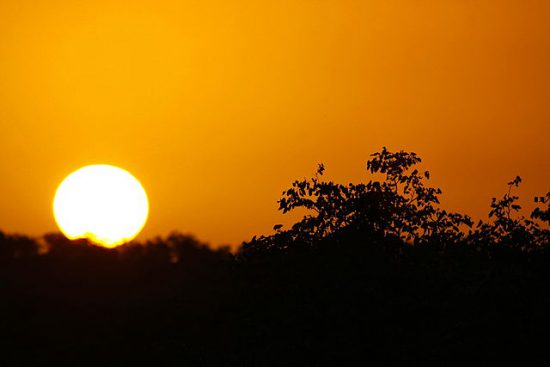 In the expansive interior of South Africa’s flagship game-viewing destination, I was lucky enough to be given the opportunity to explore the wilderness on foot. Located in a 12,000ha private concession, Rhino Walking Safaris is the only area in the park to offer this type of activity. 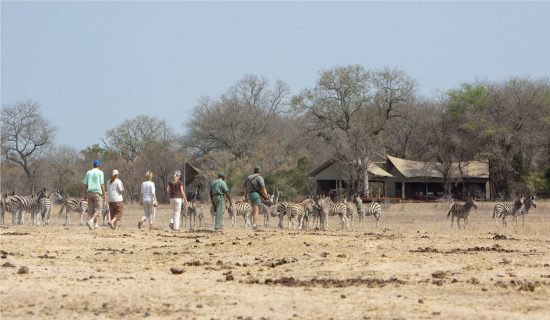 This is a year-round safari destination. The summer months see heavy rain moisten the earth as the surrounding bush is brought to life and awash in greenery. This is also the time of year when travellers have the chance of seeing the circle of life unfold as many animals give birth to their young. In contrast, the dry winters lend themselves to superb game-viewing through sparse vegetation and large concentrations of wildlife around water sources.

I was eager to make the most of my experience here and opted for the all-encompassing 5-night trail experience on offer, with walking safaris at Plains Camp, (weather permitting) a sleep out, and game drives at Rhino Post Safari Lodge.

It was a relatively early start at Plains Camp on my first morning there. Escorted by two highly qualified and armed rangers, I was told these treks only take place at this time and again in the late afternoon because the weather is better suited for walking and the wildlife is more active. 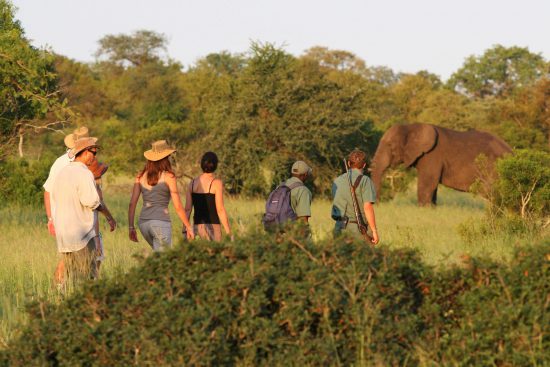 I relished in the sound of the dry grass crunching beneath my feet, causing the grazing antelope a few metres away to pause and watch our group curiously. Our guides were knowledgeable, armed, and showcased a deep respect and love for the wild. I tried to slow my breathing as we passed by springbok and grazing zebra who had paused and cocked their ears in our direction. 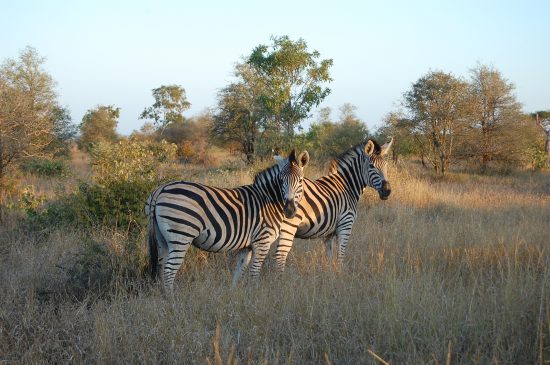 I was completely on edge and oddly exhilarated as our guides lead us across open plains. Feeling somewhat exposed, I was assured that staying in these open areas was far safer and limited our chances of happening upon or surprising any sleeping animals. It wasn’t all about keeping our eyes on the horizon, though. One of our rangers highlighted almost imperceptible indentations in the earth around us. The untrained eye would have skimmed over it, unperturbed, but years of experience unveiled these slight markings to be rhino tracks. Nearby, we spent some time examining bustling dung beetles as they bullied clumps of dirt, earth, and other natural sources into a rotund ball far bigger than themselves. 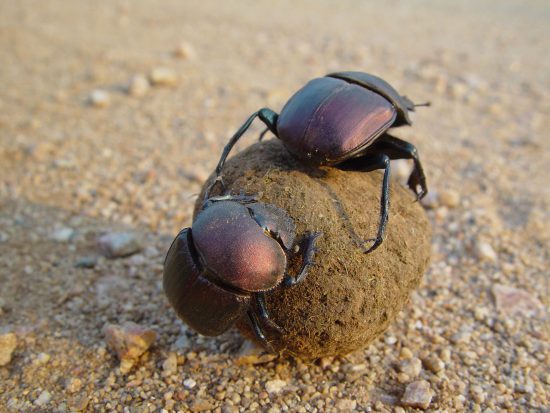 The weather gods were in my favour on my visit, and a sleep out was possible. While a night in the wild is optional, I don’t know why you wouldn’t take advantage of this unique experience. Arriving at sunset, I watched the day come to a close and eventually fell asleep to the unique lullaby of Kruger: extended periods of silence punctuated here and there by the bark of a baboon, the low grumble of a lion, and other thrilling calls of the wild. 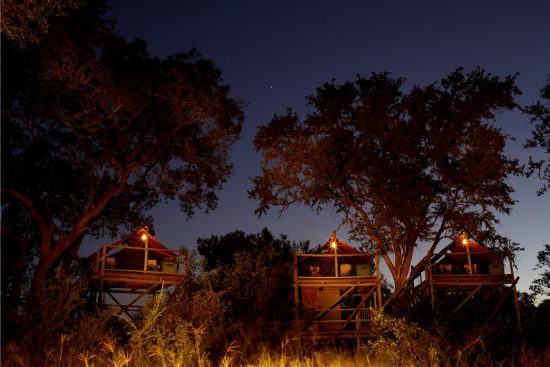 My safari was only half-way done at this point when I made my transfer to Rhino Post Safari Lodge, and I was thrilled at the prospect of seeing the landscape from a slightly more elevated (and speedy) vantage point. On our first game drive of the day, I was grateful when the low rumble of our vehicle ceased and spluttered to a halt allowing for a breather. Our game ranger and tracker leapt from its confines to offer steaming beverages and I watched, content, as whispy tendrils of heat rose from my mug and vanished into the morning air. 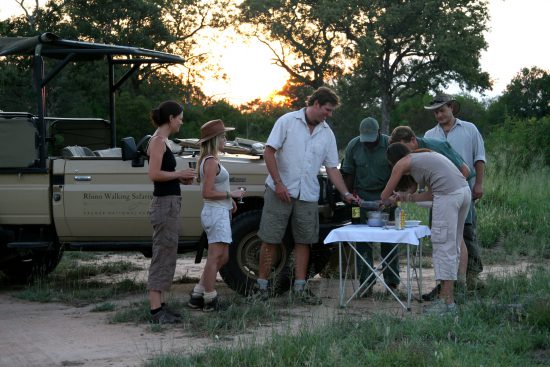 The past hour had been spent in bleary-eyed (but excited) pursuit of the Kruger’s nocturnal wildlife who we were hoping to catch as they retreated to their burrows, dens, and the shade of sprawling acacia trees for their daytime slumber. The ground, the skies, and the trees were alive with the songs and flutterings of all the bird species who called this area home. Following a rewarding jaunt through the surrounding concession, I was eager to head back to the lodge and rest. 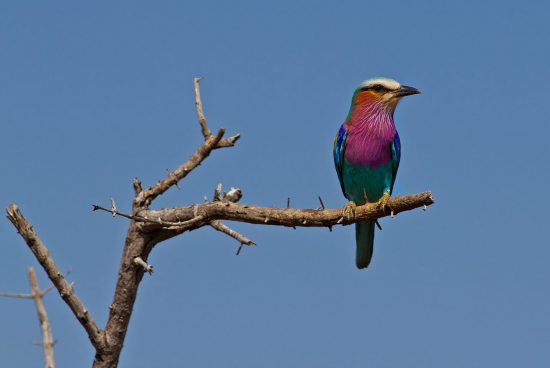 Later in the day and as the sun began its leisurely descent, signalling the slow approach of nightfall, we embarked on our second game drive. Once darkness cloaked the landscape, a spotlight scanned the horizon for glimpses of the reserve’s nocturnal inhabitants whose reflective gazes gave away their locations. I couldn’t help the excited chill that found its way down my spine as the throaty rumble of a lion’s roar reverberated across the park, leading me to wonder how soon I could come back here again. 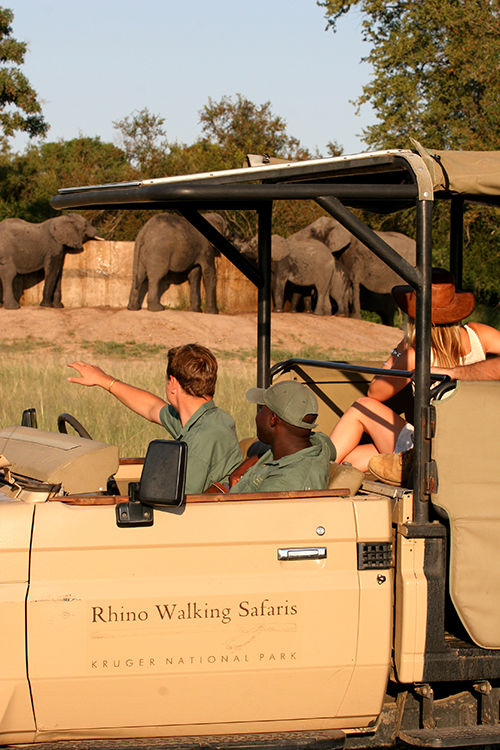 Are you ready to take a walk on the wild side like I did? Contact one of our expert consultants today and let us bring you a Kruger experience like no other.

Children under the age of 12 are not permitted on the walking safaris.

Quiz: Share Your Safari Style and We’ll Tell You Where to Go