Our vast, beloved continent is home to different climates, landscapes, soils, fauna, and flora – resulting in a diverse array of delectable dishes to tempt any palate. In conjunction with this, Africa’s rich heritage, a pastiche of cultures, and an influx of foreigners over centuries has meant that our cuisines represent a melting pot of history and taste. We’ve compiled a list of ten of our favourite dishes from Southern Africa and other parts of the continent.

Hailing from the northern parts of the continent, couscous has served as a staple part of the African diet for centuries. A healthy starch, it’s satisfying comfort food. This dish is often served as part of a stew (such as a tagine), as an accompaniment, and even on its own. Not to mention, it is wonderfully hassle-free to make. Take a look at one of our favourite recipes here paired with a delightfully Morrocan meatball main.

With its fragrant history rising up from the North African landscape, the tagine takes basic stews to a whole new height. Cooked for hours in a traditional cast-iron cone-shaped pot – and with combinations including all kinds of meat, seafood, vegetables, and fruit – it is a winning dish for all kinds of taste buds.  A flagship combination, however, is undoubtedly lamb and apricot. You can find the recipe here.

This dessert and its multiple variations have been revered South African and Namibian after-dinner treats for decades. It’s creamy texture laced with hints of cinnamon create a delightful combination, and it’s easy to make to boot. To give it a truly South African flair, take a look at this traditional recipe given new life thanks to its citrusy zest.

Simple. Fragrant. And oh, so delicious. Lamb is one of South Africa’s favoured meats, in no small part due to its wide availability and its delicious taste. Having long been a staple meal on the continent, the ways of eating it are absolutely endless. This recipe marries two much-loved African ingredients: lamb and north African Harissa paste. With the fat crisping up into sweet oblivion and the tanginess of the meat rounding out the flavour, this is a sinfully satisfying concoction.

The precursor to American jambalaya, jollof rice is a fragrant, comforting and easy-to-make dish. Often served at parties and used for entertaining purposes, several countries in West Africa claim to be the original masterminds behind this tasty take on plain old rice. No jollof rice? No party. Here’s a simple, straightforward recipe to ensure you make jollof rice like a pro, first time round.

Packed with flavour and served in the hollowed-out part of a half-loaf of bread, Bunny Chow is one of South Africa’s most iconic dishes. With its roots buried in the Durban Indian community, migrant Indian workers who laboured on sugar cane plantations in the KwaZulu-Natal Province found an ingenious way to carry their food out into the field with them. With bread acting as a bowl, and making up for the lack of traditional rotis, the Bunny Chow was born. You can try your hand at making it here.

Chicken is an ingredient that provides an inexhaustible array of recipe options. One such way, however, is so famous that restaurant chains dedicated to this manner have sprung up across the continent. I’m talking about piri-piri chicken, of course (or peri peri, depending on how you feel). With some of the earliest recipes coming from the continent’s east coast, countries such as Mozambique have been giving chicken a decided ‘bite’ for a long while now, and it’s certainly caught on. Learn how to make it here.

Not familiar with the term? That’s OK. You probably know it by a different name. Perhaps you call it a barbecue, a cookout, or even a barbie (over here we call it a braai). Either way, cooking meat on an open flame or hot coals is somewhat of a tradition for us on the African continent. The formula is simple, really: select and marinate the meat you like best. What it really comes down to, though, is knowing how to braai. Take a look at this handy braai guide.

Hailing from West Africa, this is the perfect opportunity to get your greens in a totally new and delicious way. Mchicha is, in its simplest form, spinach cooked in a peanut sauce. Easy to make with simple pantry staples such as peanut butter, stock, and tinned tomatoes, you’ll be hogging this dish all to yourself. Be prepared to have friends asking where you got such an unusual and tasty idea from! (Psst, tell them it was us). Learn how to whip up this easy meal here. 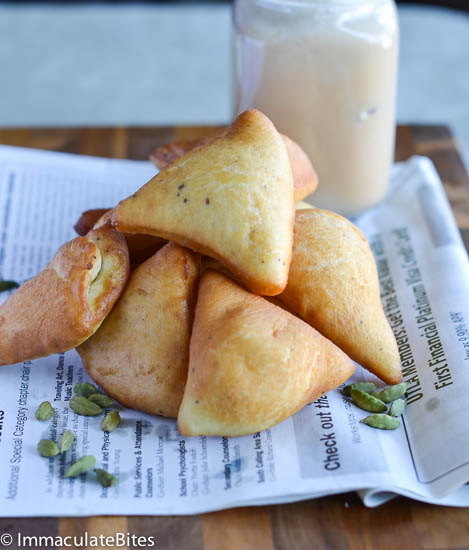 Known by many different names from Ndao to Mahamri, Mandazi is a prime example of African street food. Popular in East African countries such as Kenya and Uganda, it can be found on many a street corner. At its core, Mandazi can be considered a semi-sweet doughnut of sorts, but with elements such as coconut and cardamom, its flavour proves much more complex and layered. You can learn how to make this delicious snack here.

This traditional South African dish (pronounced Bah-Boor-Tee) has roots that extend as far back as the Roman era when a combination of cooked meat and pine nuts were layered in a dish and dubbed Patinum ex lacte. That being said, the modern-day variation of this dish looks nothing like its ancient counterpart. Bobotie was later mentioned in Dutch cookbooks from the early 17th century before being adapted to its celebrated current form courtesy of the Cape Malay community. Typically, it consists of minced beef or lamb combined with curry powder, raisins or sultanas, and almonds, and is topped with bay leaves and an egg mixture. This hearty and homely dish comes in a variety of variations, but you can find one of our favourite recipes here.

Thanks to the following food bloggers and writers for generously allowing us to reference their recipes and use their images to showcase these delicious African creations: