Four Must-see Owls of the Okavango

Before I went to Botswana I’d never have imagined myself as an aspiring ornithologist. Not even as a bird nerd. I was a fair feather kind of enthusiast – I could appreciate pretty things in flight but I had trouble identifying a common pigeon. After my first trip to the Okavango, everything changed, and I discovered that owl one really needs is a face-to-face encounter with the teddy bear-like Pel’s to get the twitch for life.

The Okavango is one of those special, humbling kinds of places that remind you that in the greater scheme of things, you are infinitely and wondrously small. Wonderfully fragile, and inherently connected to the wild. The first night I was in the Delta, I heard the call of the scops owl echoing and that was the moment where my obsession with the owls of the Okavango truly began. I chased the hoot from tree to tree, mindful of bumping into grazing hippos and elephants en-route, but the sneaky little scops eluded me, blending seamlessly into the dark.

Over my next few ventures into Botswana, my love for the supposedly wise and evidently-trained-in-subterfuge strigiformes (sometimes they’re impossible to spot!) only grew – here are some of the owls I encountered:

These little guys hold a special place in my heart, mostly because their name is adorable and their teeny-weeny stature adds to this impression. Only 19cm in height, they have mock eyes at the back of their cinnamon-coloured heads to confuse predators. If you have a fusty grandpa with big bushy eyebrows, you might see a likeness in the grouchy-looking owlets as their yellow eyes are fringed by impressive ‘brows’ . With long tails, and pretty white and brown spots on their upperparts, they camouflage effortlessly into the trees they nest in, which are often located in a thorn-scrub forest. Listen for their unmistakable wailing whistles, which can be heard when they’re hunting insects during the day, and at night.

Still my favourite, the scops is a minute tufty-eared treasure, with an endearingly impressive feathery ‘moustache’ (certain species only). Although the different species vary, they’re usually only 15-17cm in height, with greyish-brown mottled feathers, and a pale facial disk. They have large yellow eyes (which I think makes them look permanently bemused), and well-developed ear tufts that are generally kept lowered. As nocturnal creatures, they roost in a tree trunk during the day and can often be mistaken as the branch they’re perching on. Insects are their primary prey, and although their calls differ according to species, the cry of ‘scops-scops’ echoes through the crisp night air of the Okavango. 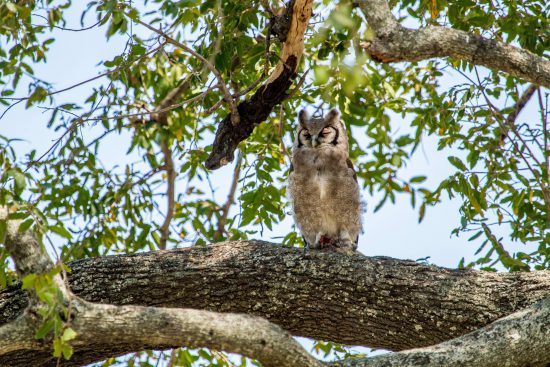 Some owls are cute – these are majestic (they’d eat me if I called them cute). The Giant Eagle Owl is the world’s largest owl, and it looks very proud of its accomplishment – I’m convinced it has a haughty expression. They are absolutely gorgeous with light grey feathers, and a pale face that is outlined in black. Check out their pink eyelids, which make them seem like they’re wearing make-up, and their sand-coloured underbellies with dark grey-brown smudges. Ear tufts extend from over their eyes, and they have powerful beaks (all the better to eat other birds and small mammals with). Look out for them at dawn or dusk – they usually roost during the day. Typically, they’re found in the woodland or savannah, and they have gruff hoots suited to their stature.

Finding this fellow was one of the best days of my life. We’d been walking for a while, single file, through the long grasses of the island’s plains, startling some nervous impala along the way. The sun beat down on us, and the elephant-stripped baobab provided next to no shade, so we took a detour into some dense trees, where I’d been told a very special resident resided. If I’d been on my own there’s no way I would have spotted him, but once he was pointed out to me, it seemed natural that this was his rightful place as guardian of the forest. He sat with his eyes closed, the picture of serenity, and I longed to reach out and stroke his fluffy feathers, but that would have disturbed his dignity. The Pel’s is on every Twitcher’s must-see list. They have amassed an almost mythical status due to their incredible rarity and beauty. Having one snoozing right in front of me was an unforgettable experience – especially as only an estimated 100 pairs inhabit the whole of the Delta (Xigera Camp is a good place to spot them).

Resembling a teddy, the bird has reddish-tinged brown feathers, with dusky barring and spots, a white throat, paler streaked underparts, and a light rufous underwing. The longer, fluffier feathers on top give the Pel’s a bed-head look, and its eyes are a beautiful hazel colour – I think it has a kind, thoughtful expression, but Twitchers would probably laugh at me. It’s 51-61cm in height, with an average wingspan of up to 445mm.

The Pel’s has highly evolved eyes for hunting fish, frogs, and crustaceans, along with spiky foot soles for extra clasp. The owls can be found in riverine forests, and when in predation mode, they perch on a branch overlooking the river and swoop down as soon as promising ripples are detected. They can catch fish weighing up to 2kg, and they have been known to wade into shallow sand banks to forage for food. Their call involves a deep hoot followed by a series of soft grunts, and they echo their songs every ten minutes or so.

I stood gazing at the slumbering owl for some time, and then, as he sensed he was being watched, he opened a lazy eye and looked back at me, surveying me from his stillness. We looked at each other for a while, in what I like to think of as a moment of connection and mutual respect, and then I nodded, and turned to traipse back through the forest and plains, back to camp.