The Battle to Save South Africa’s Wild Dogs

The first thing we see are the ears. Big, black and round, they stick up above a rise in the road. These Mickey Mouse ears can belong to only one animal – the endangered and the embattled – African wild dog.

We’ve been driving up and down the valley for two hours trying to find this pack of nine. We have radio telemetry and experienced guides on our side, but the dogs seem to be toying with us, always returning to where we just were. Now, after yoyoing across the reserve we have found them, or, maybe, they have allowed us to find them? We approach eagerly and the entire pack comes into view.

The pack is made up of two adult males and seven pups. The two adults stare at us indifferently while the pups scratch around, sit down, stand up, jump on each other playfully and keep moving about in an endearing, silly manner. We take photos and smile joyously at them, marvelling at the animals we’ve been discussing the past few days with the Wildlife ACT conservationists. We’ve been trying to determine, as South Africa’s most endangered carnivore, what does their future look like? And what can be done to improve it? Before long, the dogs get up and trot down towards the dry dam bed below us. We turn the car and follow slowly after them. 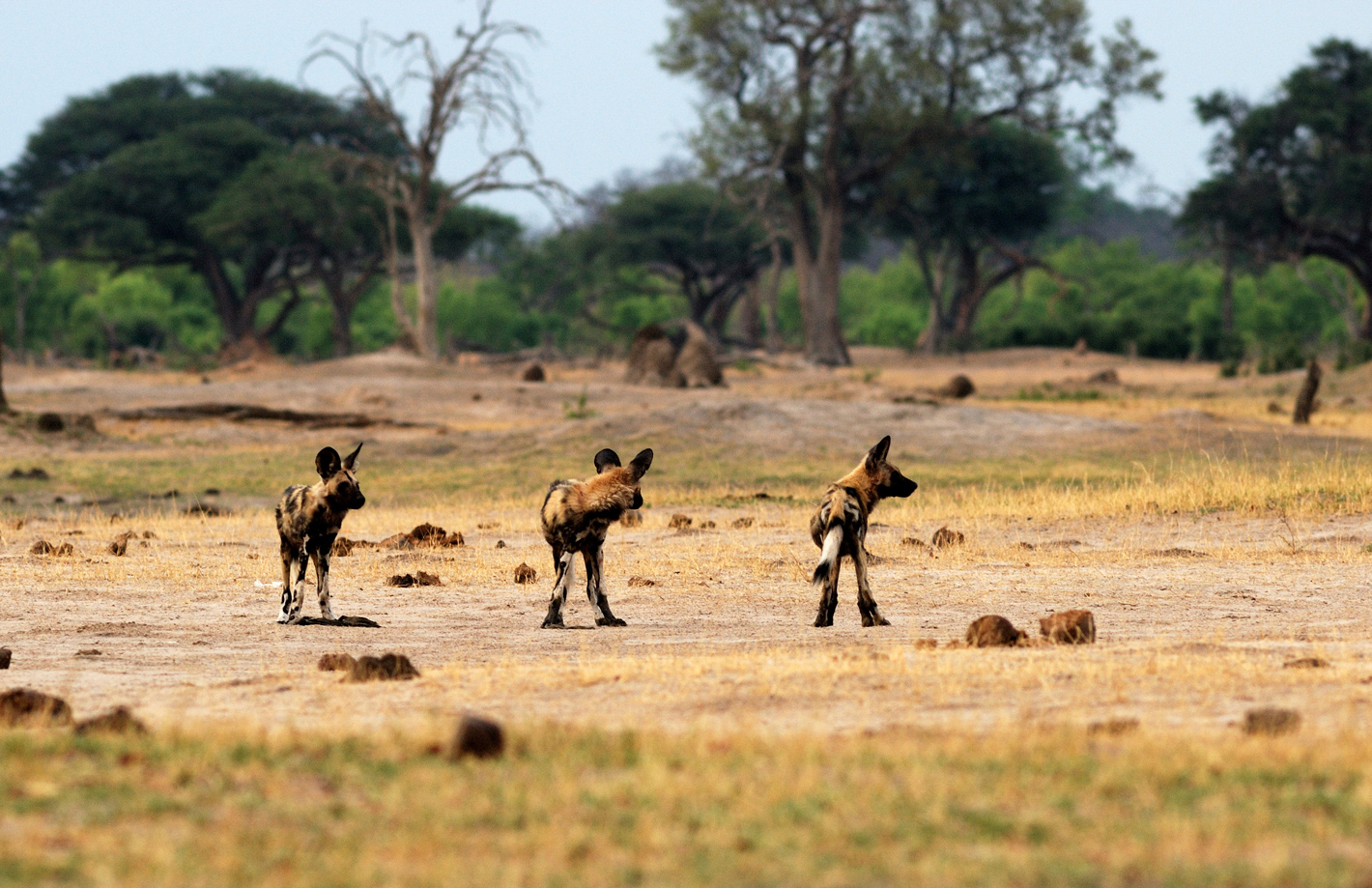 Back in 1997, wild dog numbers were at an all-time low with reports the numbers of dogs left in South Africa were as low as 200. The dire situation called for action and led to the establishment of The Wild Dog Advisory Group, which goes by the delightfully fitting acronym of WAG. WAG was established to monitor and facilitate the development and maintenance of the metapopulation of wild dogs in South Africa.

The management of the wild dogs involves all of the dogs in South Africa outside of the Kruger National Park. The Kruger accounts for one-half of all of South Africa’s wild dogs. Due to the incredible vast size of the Kruger, their dogs require no intervention and happily go about their wild-roaming, communally-attuned ways. Outside of the Kruger, however, the wild dogs need careful management to ensure the healthy growth of the populations and the formation of new packs. Due to habitat loss and the enclosure of formerly free-ranging areas, the dogs are not able to behave and procreate as they once did.

Normally, packs are formed when same-sex dispersing groups (usually siblings) leave their own pack and join with other unrelated groups of the opposite sex. This occurs when animals are approximately one and a half to two years of age. Factors such as food availability and pack composition likely influence the rate and composition of dispersal groups. Dispersing groups have been recorded travelling up to 450km before finding appropriate mates and forming a new pack with which to establish a home range territory.

Today, due to habitat loss it is not possible for these dispersal groups to go off and create groups of their own. That is where WAG comes in. WAG juggles the populations around and intensively manages South Africa’s metapopulation, which is divided into 23 packs. The organisation also monitors the genetics of these wild dogs and helps to bond and relocate breakaway groups into new reserves.

In the dam bed, the pups exhibit the playfulness and social interaction they are so well known for. At first, they hesitantly approach a tiny pond of muddy water, but then the pups have a burst of energy and pandemonium breaks loose. They frantically chase each other, playing a no-holds-barred game of tag where every dog chases each other at the same time. It’s frighteningly energetic, like a toddler’s birthday party with an over-supply of candy.

Two chase one, then two more chase the other two. One picks up a stick and is chased by the others, crashing into the reeds, going back and forth. For a moment, the two adults stand above the pups on the dam bed looking uninterested. They then decide to get involved in the action, like the parent who gets their face-painted at the county fair, and dash down to smash into the reeds and the pups. High-pitched whimpering follows and the adult trots out triumphantly.

Over the last century, habitat loss has played a massive role in the decline of the wild dog population. And it is outside of the reserves that wild dogs can run into their biggest issue in Africa today, poaching snares.

Impoverished communities on the periphery of reserves use snares to catch bushmeat to feed their families. Wild dogs are often the by-catch victims of these snares and, due to their close family nature, it often leads to other dogs coming to help the ensnared dogs and get caught themselves. There have been cases where entire packs have been killed by snares.

Changing the culture of hunting and the snare tactics is one of the challenges facing the conservationists. Another serious issue is rabies and canine distemper, which is brought into reserves by domestic dogs or is picked up by the packs that escape the confines of the reserves.

Despite all this, South Africa’s wild dog population has grown to almost 500, double what it was twenty years ago. Due to the incredible management and careful intervention done by WAG and partners, the population has managed to grow to 48 packs, with 23 outside of the Kruger National Park. It is some good news for a species which has faced all kinds of external challenges, almost all of it created by humans. Nevertheless, they are still critically endangered. The work, as always, is far from over and they will continue to require the careful monitoring and management of dedicated conservationists. The situation is challenging, but WAG has created hope where there was none before.

The pack going bonkers before us is one of ten packs in Kwa-Zulu Natal and will one day feed into other packs when the pups are ready to disperse, to create new packs in other reserves. Watching this mad pack run back and forth, it’s easy to grasp the allure of these unique animals. The dogs hold an almost mystical spell over those familiar with them, and after just a few minutes I can understand why. An intimate experience with a wild dog pack is one of those euphoric, transcendent African moments. It’s the type of magic that demands preservation. And luckily for us, WAG is doing just that.

This video captures the state of South Africa’s wild dogs and how Wildlife Act is contributing to the fight. This was filmed by the Rhino Africa Multimedia Team in Zululand, S0uth Africa.

How Luxury African Travel Has Changed – For The Better!

How Luxury African Travel Has Changed – For The Better!