Have You Met the African Super Seven?

The enthralling essence of any safari is only complete with heart-stopping encounters with Africa’s majestic animals. And the ultimate prize is a memory card filled with snapshots of the Big 5 in action. Admittedly, just because it’s a competitive world out there, the thrill of a greater challenge can beckon safari-goers to upgrade their Big 5 bucket list with the Super Seven.

“Who are the Super Seven?” you may ask. Well, it’s the Big 5 and two equally famous and formidable members of the animal kingdom. Read on for quirky facts about each member, along with heart-warming photos and the best places to see them. And just maybe, you’ll find yourself setting the goal of meeting them all on your next safari to Africa. 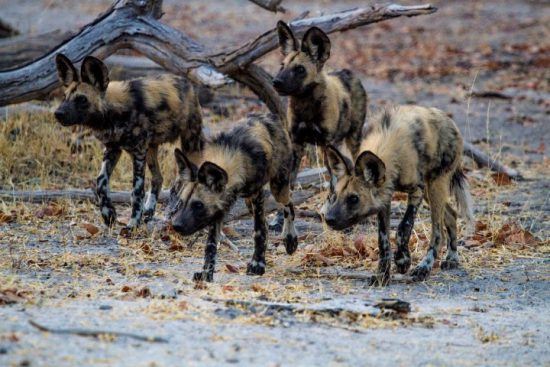 Wild dogs are probably the best exemplars of teamwork and extremely loyal to each other. Ask any ranger and they’ll tell you there’s nothing like witnessing a pack of wild dogs hunting. They do so with astonishing co-ordination, each dog strategically moving towards a singled-out prey. As soon as they close in, it’s a swift and calculated execution. Afterwards, these victorious hunters will share their spoils with the rest of the pack. Since pups are top priority within wild dog societies, they’re fed first with regurgitated food. 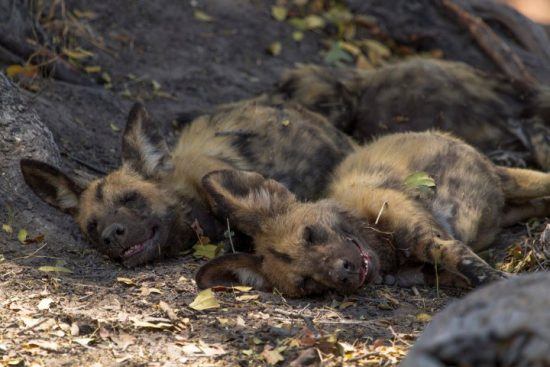 Besides their adorable Mickey Mouse ears, African wild dogs have trademark fur patterns. A prominent characteristic embodied in their official name, lycaon pictus, which translates to “painted wolf”. Each wild dog can be easily identified by their unique combination of red, brown, black and white fur.

Did you know the pack makes decisions democratically? And in a most unusual way, too. Votes are cast by way of sneezes with consensus being reached by a majority of collective sneezes. I know, I’ll also be listening closely, the next time I see them… 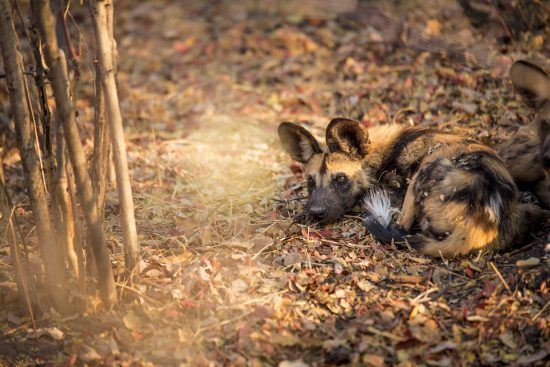 A wild dog resting at King’s Pool in Botswana

These endearing members of the Super Seven are the most endangered carnivores in Africa. They need large areas to freely roam and so habitat loss is a primary problem. And because wild dogs are so loyal to each other, an entire pack will stay with a member ensnared in a trap – putting them all at greater risk. Not all hope is lost, though, as one of our beneficiaries, Wildlife ACT are working hard to increase their population numbers. 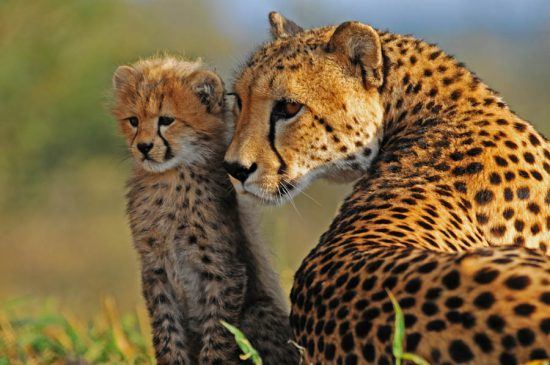 See where she gets her looks from?

As one of the fastest land mammals, it’s a no-brainer the cheetah is part of the Super Seven. Hold onto your hats as we whizz through a collection of their remarkable characteristics. They can hit speeds of 110km/h in short sprints of about 500 metres at a time. And that’s not the best bit. Cheetahs can go from a standstill to 100 km/h in just three seconds – just six milliseconds shy of the fastest accelerating sports car. Evolution worked in their favour because it’s their lightweight physique that enables them to reach these speeds. Even their black ‘tear-marks’ have a purpose – it absorbs the glare of sunlight while the cheetah is sprinting. 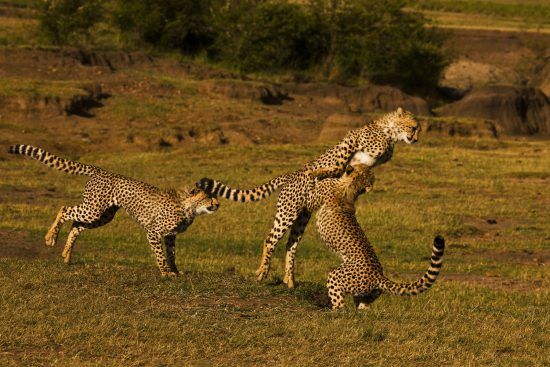 Different is good, especially in the case of the cheetah. Their habits perfectly ensure their survival by filling a niche other big cats can’t fill. For example, cheetah prefer to hunt early in the morning or late afternoon, which is outside the time slots lions and leopards fill in for hunting. Less competition is advantageous, since cheetah are not able to defend themselves against other predators. And lucky for us, these hunting times perfectly coincide with the usual game drive times. 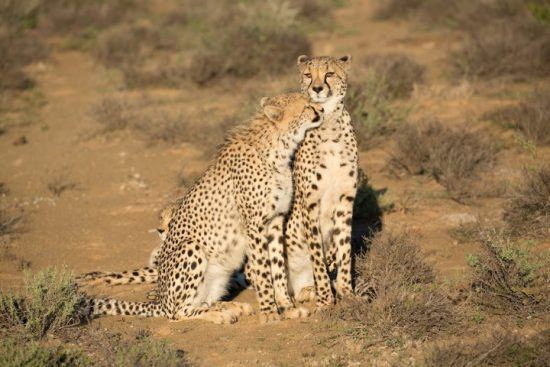 Doesn’t this remind you of house cats headbutting?

Unlike other wild cats, cheetahs cannot roar but make rather adorable chirping sounds (have a listen here!) and purr quite loudly. Oversize house cats, perhaps? It may become harder to spot cheetah in the wild, as they are classified as critically endangered. It’s documented they don’t breed well in captivity and habitat loss is causing a shrinking genetic pool – so it’s extremely essential to contribute to their conservation throughout Africa. 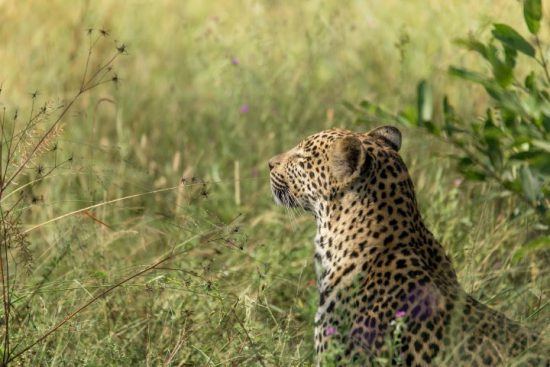 Enjoying a spot of sun

Unless you’re up to speed with the difference between leopard and cheetah, this cat is most likely to be confused with the other spotty member of the Super Seven. These graceful cats are most sought after on safari and it’s not hard to see why. There’s something about their robust, yet elegant build and almost effortless navigation in and around trees. Even the sight of leopards dragging their catch up a tree strikes awe at the clear indication of their strength. 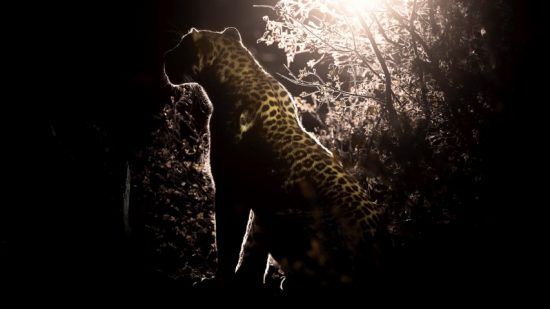 A spotlight on a leopard on a night drive

It’s not just their physical strength and flexibility that adds to their allure. Leopards are also quite adaptable to a range of habitats and not too fussy with their meals, either. Their ability to excel at both climbing and swimming serves them well. And unlike lions and cheetahs, leopards strictly go solo. So solitary, they’ll even go as far as vocally alerting other leopards when passing through overlapping leopard territories. 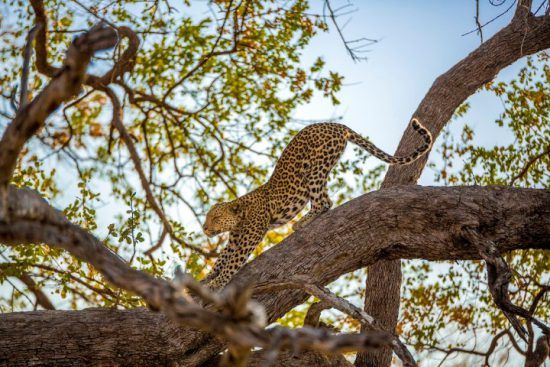 A little stretch after a nap 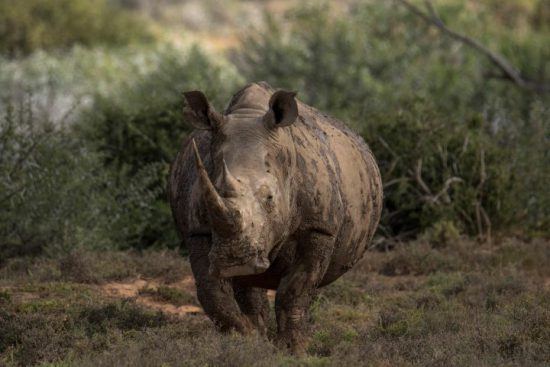 The Super Seven wouldn’t really be complete without the rhino. It’s impossible for us not to get fired up when news reaches us about another rhino losing its life to poachers. Or yet another orphaned calf battling to survive without its mother. We have an unabashed passion and commitment towards the protection of our namesake for several reasons. 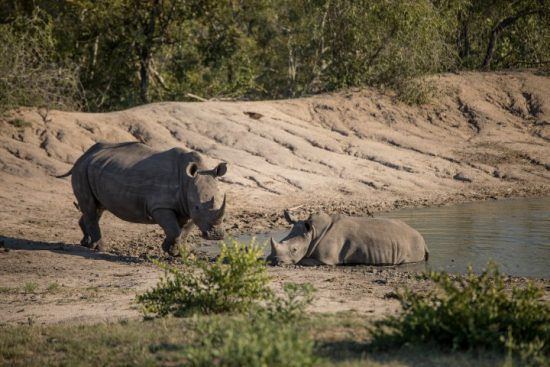 For one, rhinos are dedicated mothers. After being pregnant for 15 – 18 months, mothers will stay with their calves for as long as four years. They are extremely protective and will fight tooth and nail (literally) if threatened. A crash of rhinos (nice collective name, right?) will also encircle young ones with their horns facing out to the threat. And besides tireless commitment to long-term care, can you imagine suckling a young one when its horn starts getting sharp enough? Ouch… 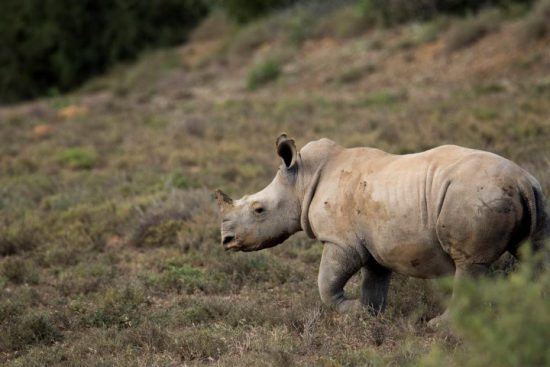 This calf’s future is in our hands

The secret to spotting the difference between the White Rhino and Black Rhino lies not in their colour, but the shape of their lips. The Black Rhino are browsers, so their lips are pointy and assist in pulling leaves off. The White Rhino are grazers and their squarish lips are perfectly designed for this.  Their horns are made up of compact layers of keratin (same material as our hair and nails) and it has no medicinal benefits whatsoever. And despite their bulky build, rhinos are actually quite fast, so don’t even think you could outrun one! 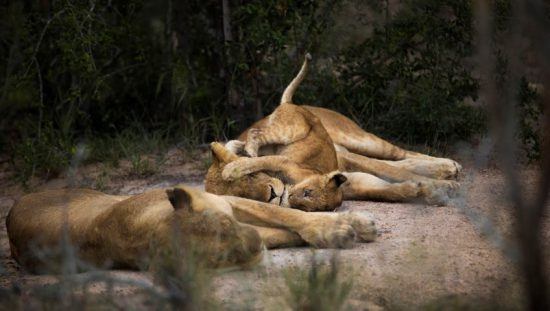 Unlike the well-known song, “In the jungle, the mighty jungle, the lion sleeps tonight…”, lions don’t really dwell in jungles, but mainly in grasslands and open plains. So, the acclaimed title of “King of the Jungle” is technically incorrect too. There’s still some truth in this title of “king”, though. As apex predators, lions have the loudest roar of all the big cats and tend to sleep for about 20 hours a day. How’s that for a life? 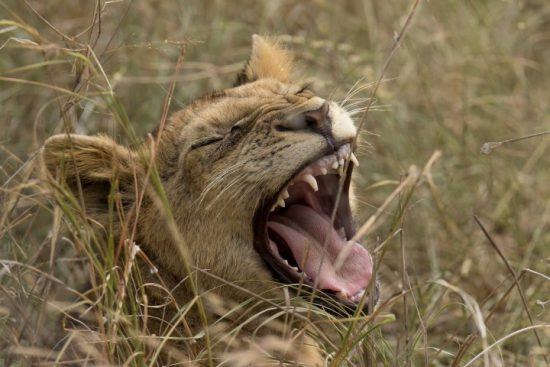 Look how sharp my teeth are

If the savannah had a party bash, the lions would be the most sociable of all wild cats and rock up with the entire pride. An alpha male will lead his pride of lionesses and cubs with utmost dedication.

Lionesses will pair up or form a group for hunting trips, while the lion stays behind and defends his territory. After hunts, alpha males get their share of the meal first before everyone else. And contrary to popular gossip through the vines, male lions are perfectly capable of hunting, especially in bachelor coalitions. 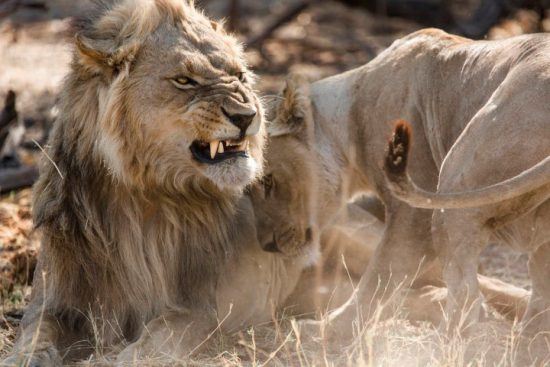 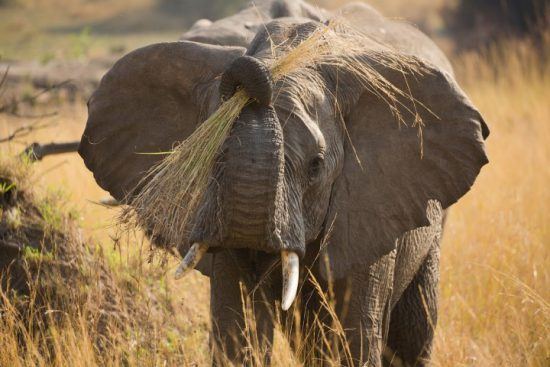 If you thought the rhino had a hectic time being pregnant, wait until you hear about elephants. As the largest land mammal, elephants also hold the record of having the longest gestation period of about 22 months. Calves can weight as much as 90 kilograms at birth, so could you imagine how uncomfortable the mother must be in the last months of pregnancy? Lucky safari goers who have watched magical moments of elephant herds simply interacting with each other, will tell you elephants embody the notion of family more than other animals. 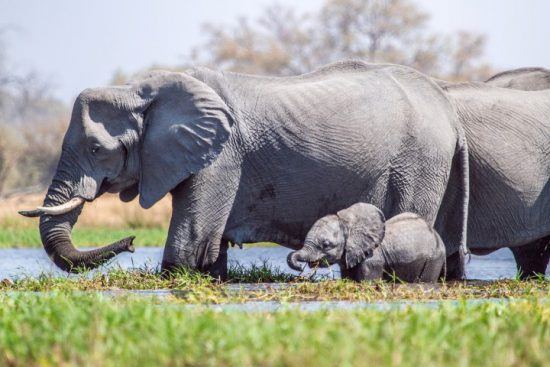 An elephant with her calf in the water

Although, they’re armed with tusks and formidable in height and strength, elephants are gentle giants and deeply caring to each other. Each herd is led by the wisest and oldest matriarch, and depend on her extensive knowledge for their survival. These tightly-knit herds are mostly females with their calves and if one mother dies, the herd will ensure the calf is adopted by another female. 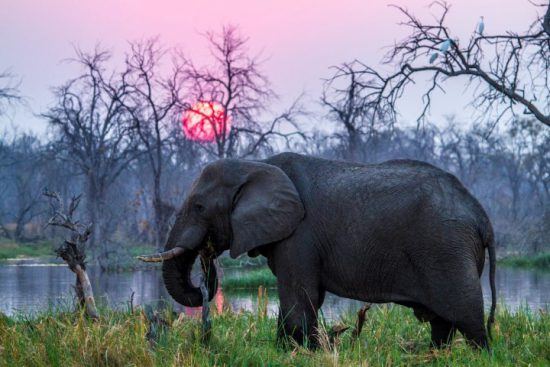 A pink sunset behind an elephant 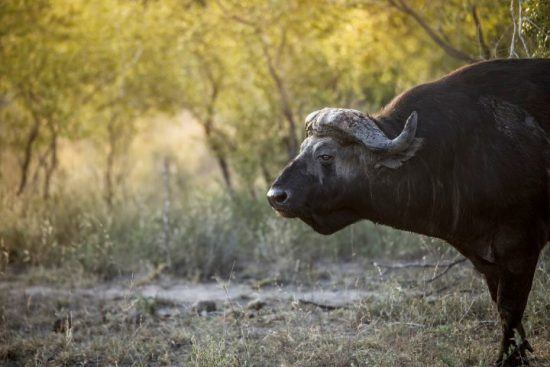 Buffalo are peaceful if left alone

The final member of the Super Seven may seem uninteresting, but give buffaloes a chance and see their formidable dignity. Buffaloes are peaceful grazers until disturbed – they’ve sealed their reputation as the main cause of lion deaths. And the saying, “as strong as an ox” should have been, “as strong as a buffalo” because they are much stronger than oxen. 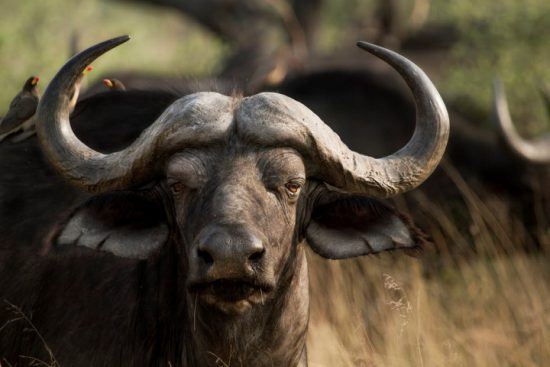 Their hides are about five centimeters thick and full of snackable bugs, which their yellow-bill oxpecker friends relish. To keep their hides gorgeous and minimise the population of bugs camping in there, buffaloes frequently wallow and roll in mud and shallow water. Imagine a scene of about a hundred buffalo gathered at a waterhole, and enjoying a cool-off while chewing on cud. And then, nearby, a pride of lions hidden in the long grass eye a small calf. Lucky is the one to watch the drama unfold on a game drive… 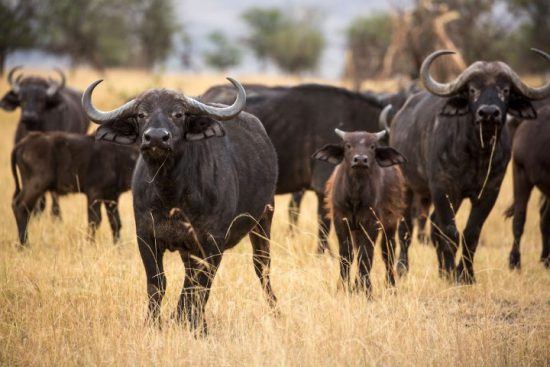 A curious herd of buffalo 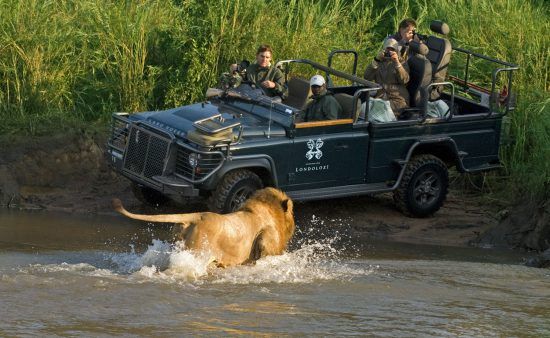 Packing already to meet the Super Seven on safari? Feel free to contact our experts for personalised itineraries and handy advice.

Jessica grew up surrounded with stories and photographs of the Congo and Lake Kivu, where her grandfather experienced his childhood. After reading several National Geographic magazines, she realised her dream of travelling and writing about Africa. Jessica is proudly Deaf and fluent in South African Sign Language and hopes to master more languages. Besides being an avid reader, she loves animals and wants to experience owning as many pets as possible.