Corners, Convergence and a Crossborder Conundrum

There’s a common belief that African border crossings are the truest test of any overland traveller’s mettle. And while travel tales make rich fodder for fireside fables, border crossings are fantastic fuel for stories involving our most recent transboundary ordeals. The politicisation of borders has become a defining feature of our contemporary global climate. In this way, it’s easy to understand why borders in Africa, and throughout the remainder of the modern world, have earned an ominous reputation. But they’re not as bad as people think. And there are notable exceptions to the ideas of winding queues, hour-long delays and deep-rooted corruption – especially the story of the world’s only quadripoint border just north of Botswana’s Chobe National Park. 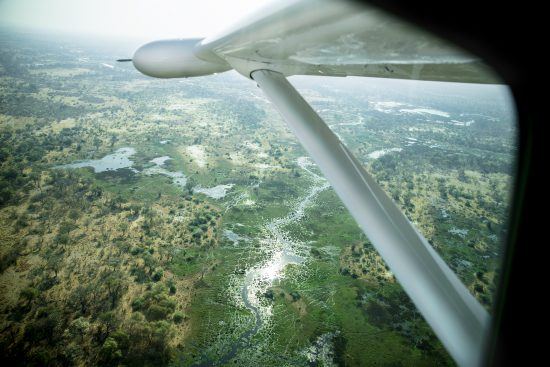 As it is, there are several instances where the borders of two or three nations touch, but the rare occurrence of four nations converging exists only in one spot in the world.

From a mapped-out point of view, the narrow ‘Caprivi Strip’ of Namibia seems to go hundreds of kilometres out of its way to meet Zimbabwe. Some residents call this area, at the northern end of Chobe National Park, the ‘four corners of Africa’, where the edges of Zambia, Zimbabwe, Namibia and Botswana meet.

Currently, no signpost indicates the exact spot, but near a place named Kazungula, these four countries gather at the merging of the Zambezi and Chobe Rivers. Technically, it’s just water, but this confluence of quartered contingency occurs only in Africa.

A case of geographical trivia 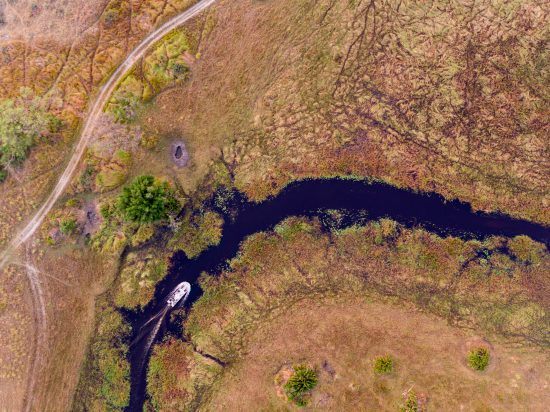 A bird’s eye view of the Chobe National Park

Critics have argued that the spot is not a true quadripoint, but rather a pair of tripoints that almost, but don’t quite, touch. Upon closer inspection, it is said that a thin strip of underwater real estate, equalling about 75 metres, separates Namibia from Zimbabwe.

And the obvious jurisdictional headache of having four countries so close to one another has resulted in some conflict over the years.

At one point during in the 70s, the ferry that carried people across the river to Botswana became a subject of contention, with countries trying to lay claim to the transport. A small squabble erupted, but it was rather subdued for an incident at international level.

While many maintain that slight changes in the flow of the Zambezi River and the exact geographical borders have eliminated an actual point of meeting, the countries are all so close that the differences can only be attributed to semantics. 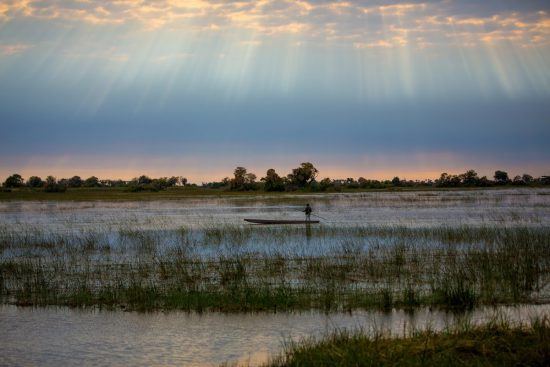 Mokoros make for some of Botswana’s most characteristic visuals

Of the four corners that make up the quadripoint, Chobe forms the most euphoric point of contact.

The Chobe National Park was set aside as a wildlife reserve in 1930, officially becoming the country’s first national park in the late 60s. It’s been a pretty popular safari spot ever since; Hollywood royalty Elizabeth Taylor and Richard Burton chose the park for their honeymoon in 1975.

Ironically enough, the 11,700 square kilometres that make up the park encompasses four very distinct ecosystems: Serondela in the extreme northeast with fertile plains and thick forests; the Savuti Channel in the west, which is now once again spilling its contents into Savuti marsh; the Linyanti Swamps in the northwest; and the arid hinterland in between.

The area, in tune with Chobe’s serendipitous magic, has a quadfecta-like appeal. Encompassing mixed woodland, grassland, claypans and savannah, to create a world of safari legend, with wildlife to rival anywhere else.

One of the great African wildlife destinations 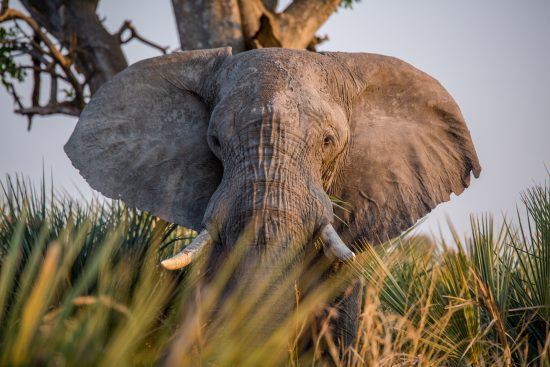 Chobe National Park is known as the world’s elephant capital

Chobe has one of the largest concentrations of game in Africa, and the Serondela area – effectively the Chobe riverfront – is the prime spot for viewing Kalahari elephants, whose large, flapping ears, when looked at from the right angle, can resemble the shape of Africa.

However, for many, the focal point of this famous park is the flashing blue Chobe River itself. It is described as one of the continent’s most beautiful streams of water, winking at the world through its fringes of jackalberry and ana trees.

This is especially true in winter when the lovely sapphire spring of life offers a ribbon of opportunity for game to come and drink. Forest and floodplains line the Chobe River, and besides some semi-permanent pans further south in the park, there is not much other water to be had in the dry season. This then, is where the main action takes place. It is a magnet for elephant – sometimes they dot the floodplain for as far as the eye can see.

In total, it’s estimated that around 120,000 elephants live within the park’s boundaries. On a very good day, you can watch hundreds of pachyderms as they come down the red hills in a diagonal line towards the water, where they might remain for hours.

Lucky guests cruising along the river can also see lion on the banks, rotund hippos slumbering in the shallows and every so often a slug of a croc, basking in the sun as reptiles love to do.

The beauty of the Chobe Riverside – and the tiger fishing, safari cruises and riverside lodges that accompany it – undoubtedly make this the park’s most accessible game-watching destination. 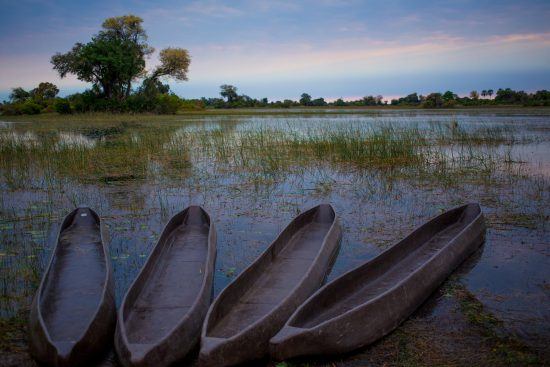 Mokoros line a riverbed in Botswana

Today, Chobe single-handedly carries the promise of what Africa encompasses. And, much like its border, the temporality of the place is operatic. Radically changing the typical travel narrative with every new corridor, mosaic or cross-frontier connection. And the narrative, in this case, is the story of arriving as a bud and leaving in full bloom.

This region is so much more than just a block of land, it’s a world on its own. Where borderlines are drawn in the riverbed and divisions eventually become swept away in the stream.

If Botswana’s mix of charm, isolated beauty and oasis-like appeal serves as a relentless source of inspiration for you, meander this way.