It’s mid-March in northern Tanzania, and thousands of animals are milling contently on the rolling plains of the Serengeti. The female wildebeest have just dropped their calves, youngsters stumble and stagger to their feet and are up and running within minutes, and there’s still plenty of food to go around – life, albeit momentarily, seems pretty idyllic.

And yet, one, or two, or maybe a few hundred wildebeest sense something in the air. For some reason, a few of them decide to start moving. They just get up and go, and the rest begin to follow. Just like that: the largest terrestrial mammal movement on earth has begun; the Great Wildebeest Migration.

It is a trek, a round trip, of some 1,000 kilometres, over two countries (Tanzania and Kenya), across plains where predators – lion, cheetah and leopard – wait to pick off them off, over hills, and through croc-infested rivers; battling starvation, thirst and fatigue; with many animals perishing along the way. There’s no real start and finish to this showcase, but rather a clockwise grazing and reproduction cycle that has followed the same pattern for thousands of years. Quite frankly, this is the ‘greatest wildlife show on earth’ – making it the most unique safari experience in Africa.

When’s the best time to see it? 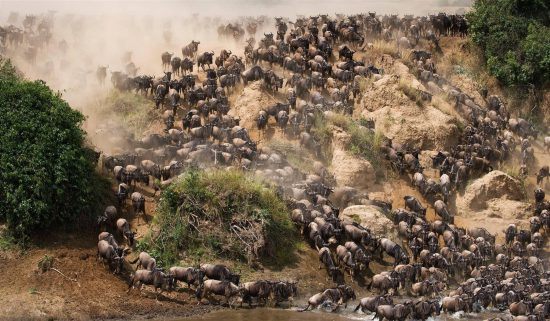 The Great Migration is an astonishing showcase of Africa’s wildlife

Deciding when to book your safari is probably the biggest factor when planning your trip. You certainly don’t want to arrive in Kenya or Tanzania expecting to see vast herds of animals, only to find empty plains.

Each year the animals move at different times because their pilgrimage is determined by rainfall, which is becoming increasingly unpredictable. But here’s a rough breakdown of where they’ll be at certain points of the year and where you should stay:

The Migration in Tanzania 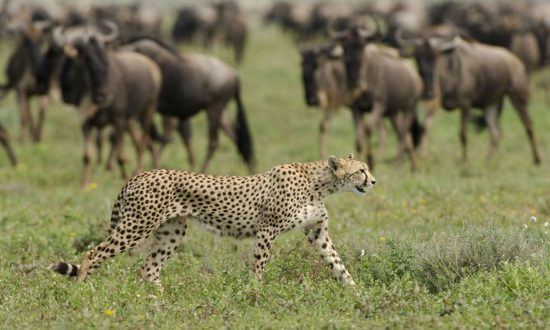 Big cat sightings are prolific when following the migration

The herds congregate in the Serengeti and Ngorongoro areas of northern Tanzania, which are made lush by the annual rains. This is considered calving season, and is an excellent time for viewing newborn babies; while big cat sightings (and kills) are common. Ngorongoro Crater Lodge is your go-to option when considering where to see the Great Wildebeest Migration during this time.

The herds start to migrate west and north to the grassier plains of the Serengeti’s Western Corridor. Seasonal rains make it difficult to follow the herds during this stage of their migration. In fact, many of Tanzania’s smaller camps shut down due to impassable roads.

As the rains stop, wildebeest and zebra gradually move north and individual groups begin to form much larger herds. This is also mating season for the wildebeest. The Western Serengeti is the best place to watch this stage of the migration unfold.

The herds will also reach their first big obstacle during this time, the Grumeti River. The Grumeti can get deep in places, especially if the rains have been good. The depth of the river makes drowning a distinct possibility for many wildebeest and there are plenty of crocodiles to take advantage of the ensuing distress. Grumeti Serengeti Tented Camp is an ideal spot for immediate access to the River.

The Migration in Kenya 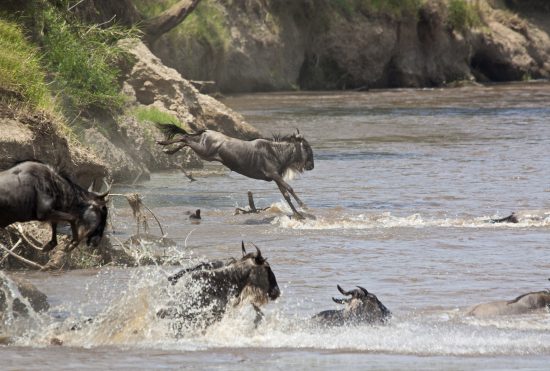 The grasses of the western Serengeti are turning yellow and the herds continue north. After crossing the Grumeti River in Tanzania, the wildebeest and zebra head to Kenya’s Lamai Wedge and the Mara Triangle. Before they get to the lush plains of the Mara, they have to make another river crossing. This time it’s the world-famous Mara River, and that too is filled with hungry crocodiles. The Mara River crossing has been immortalised by Attenborough over time, with scenes of nature ruthlessly sorting animals into those who live and those who die. Consider witnessing the spectacle from Angama Mara.

The Mara plains are filled to the brim with large herds, naturally followed by predators. The best place to stay while the migration is in the Mara is Governors’ Camp.

The rains start in the south again and the herds begin their long trek back down to Tanzania to give birth to their young. During the short rains of November, consider Klein’s Camp when deciding where to see the Great Wildebeest Migration. 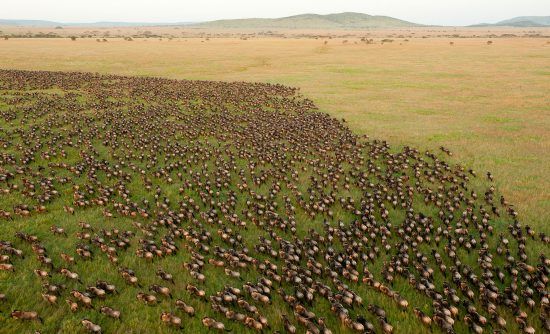 Wildebeest storm the open plains of the Serengeti

Ready to determine your starting point for where to see the Great Wildebeest Migration? Get in touch with one of our Travel Experts today.

Is Victoria Falls Drying Up?