Africa is like a world of its own, with bafflingly contrasting scenes neighbouring one another, as seen on Namibia and Botswana safaris. Combining otherworldly ancient desert-scapes with creatures thriving in its unforgiving weather conditions and water bodies glittering alluringly to attract a myriad of wildlife species, it's something we struggle to explain in words. Even photographs and videos don't do it justice. Therefore, it's no wonder they are two of our most frequently requested destinations. So, if you want to step into the dazzling desert and water wonderlands on Namibia and Botswana safaris, follow us this way… 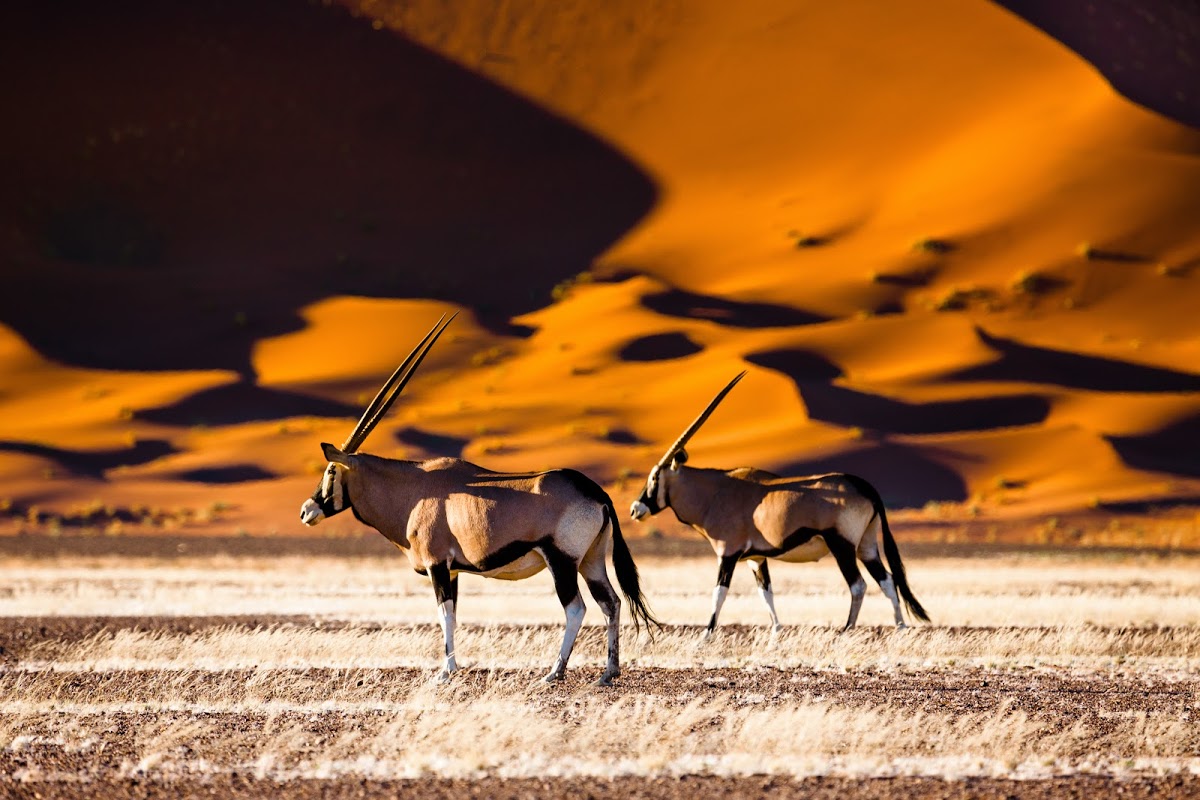 Travel from Namibia's red dunes to Botswana's green waterways with us

Namibia is on the west coast of southern Africa. Not only is it a world of contrasting landscapes, but it has the second-lowest population density, even though it's around double the size of Germany!

So, if you want a digital detox and to head right into the belly of the wilderness, Namibia should, without a doubt, be on your itinerary. 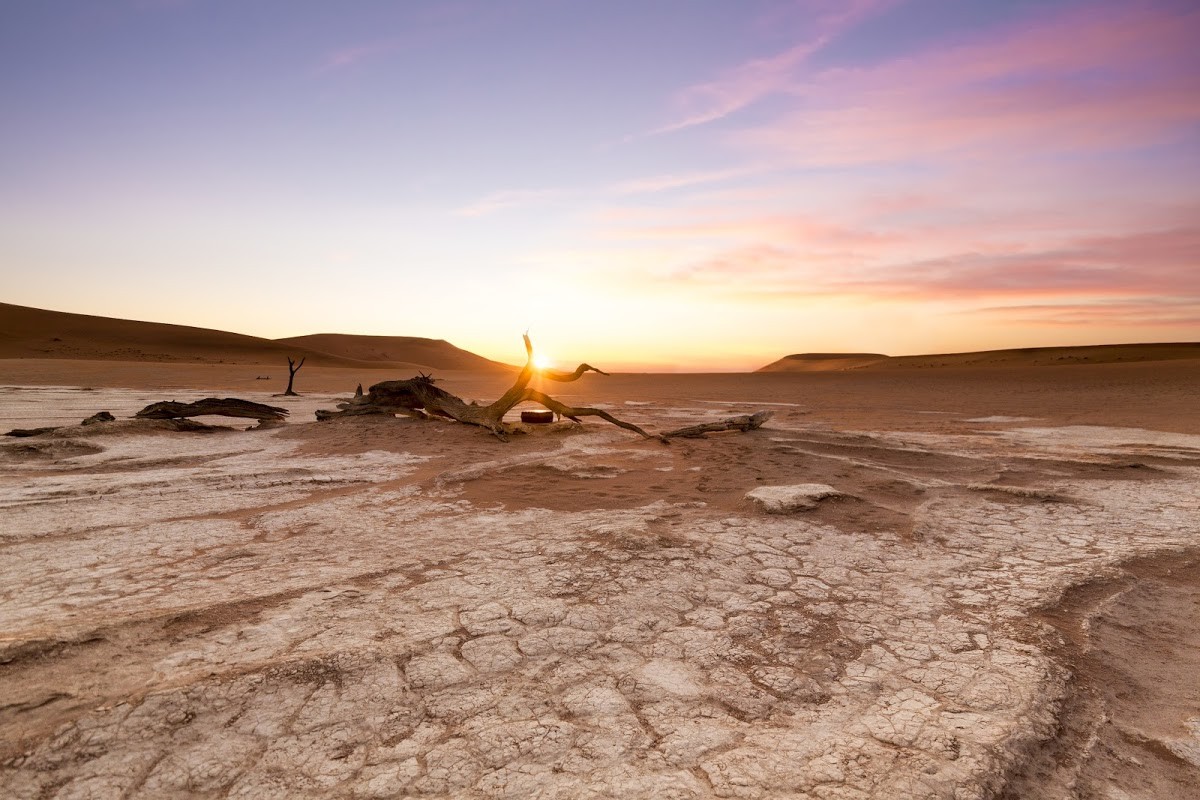 Visit The Oldest Desert in The World

Imagine looking around, and as far as you can see, rolling red dunes stretch across the distance. A lone oryx antelope ambles past in the distance. The sun is going down, painting the dunes with golden light and making them look almost like they're on fire. 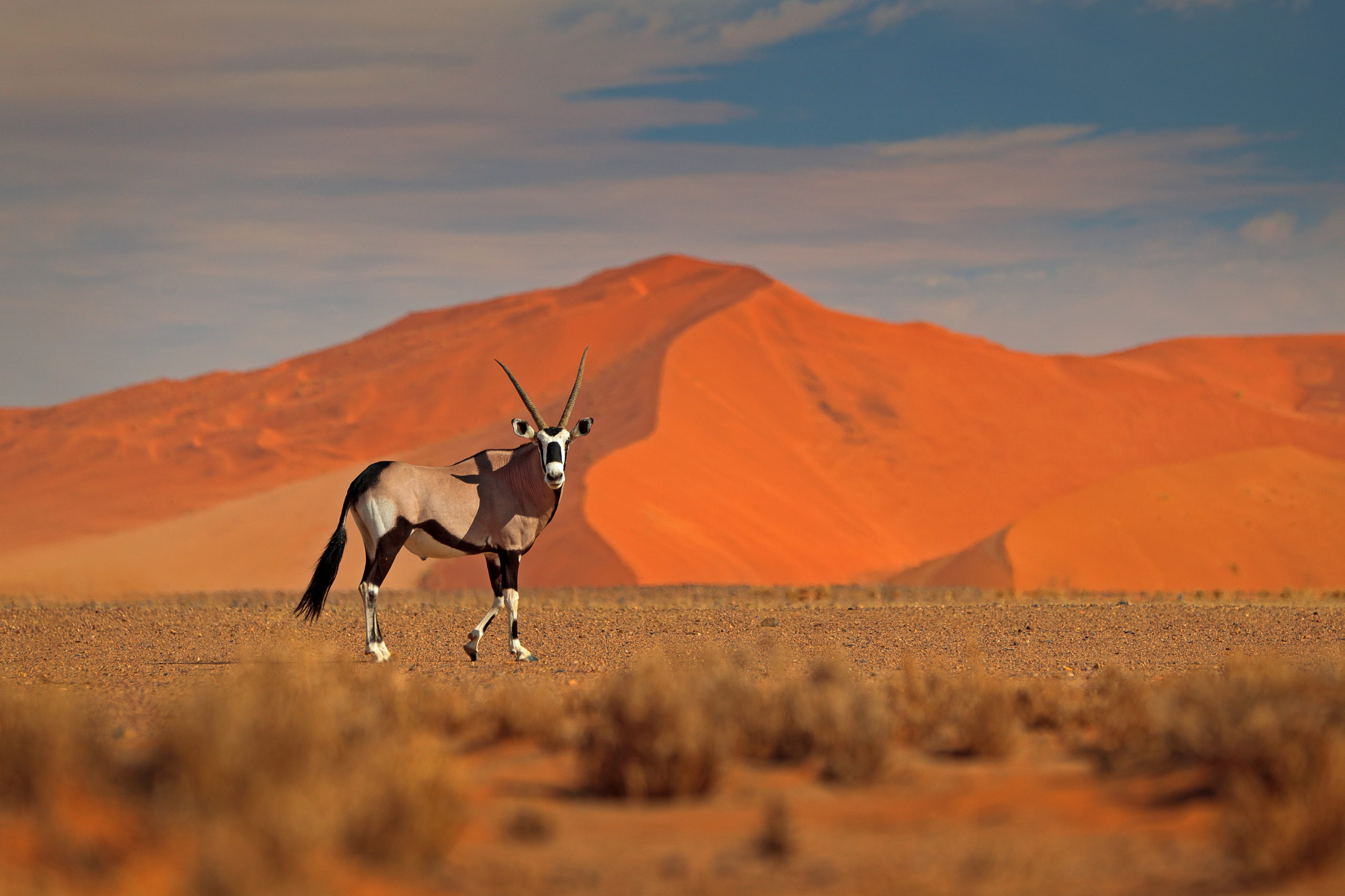 The Namib Desert is best known for being the oldest desert in the world, dating back at least 55 million years. It's not the largest in the world, but still massive, spreading across 81,000 km². Although it's arid, every now and again, fog rolls in like a blanket – entirely unexpected and puzzling given that it's a desert. This phenomenon is also a saving grace for the plant and wildlife species that get free water from the fog. 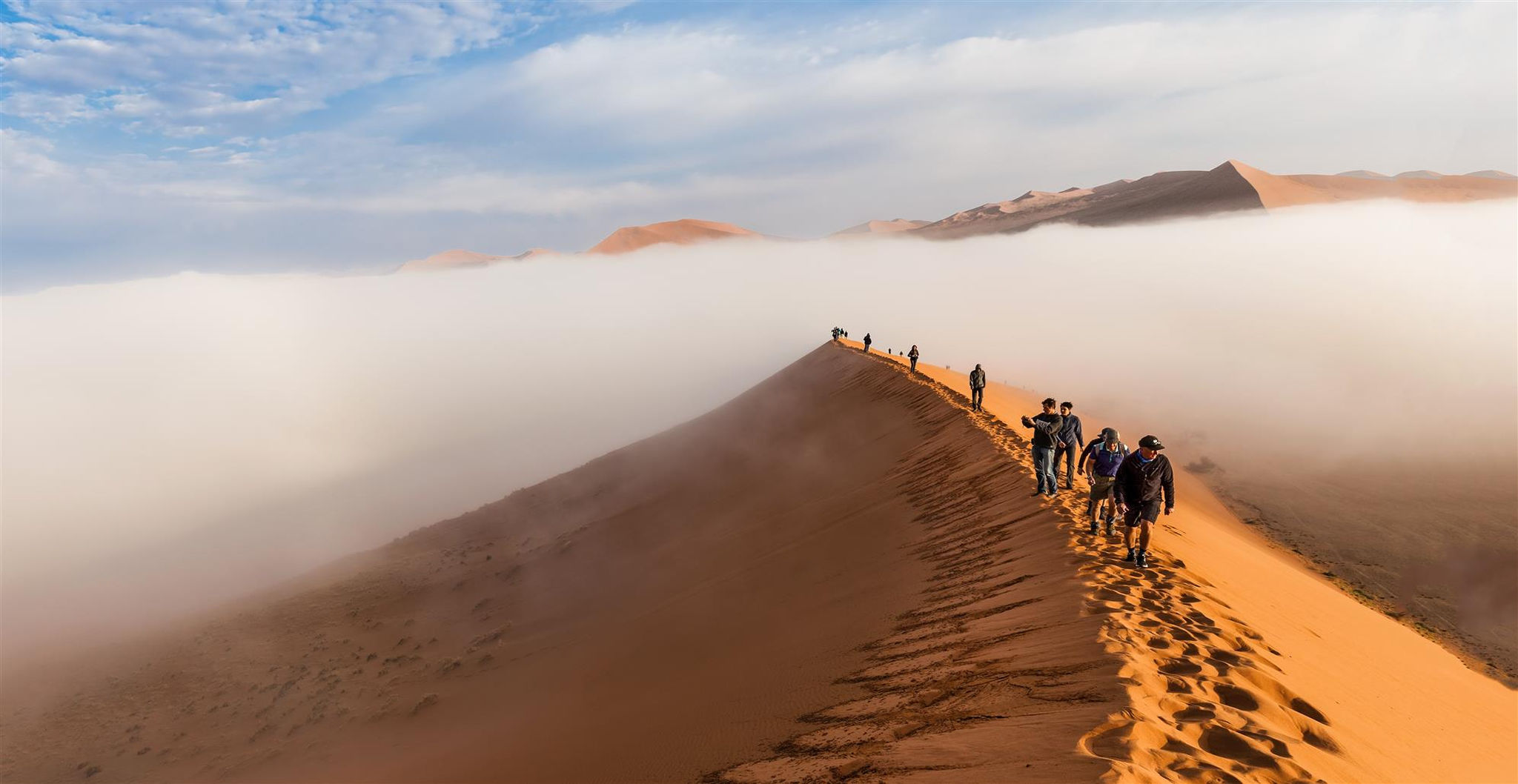 What to Do in The Namib Desert

We love sending (and visiting ourselves!) our guests to Namibia to experience the Namib Desert in person. You can explore the desert in many different ways, from visiting Sossusvlei and climbing Big Daddy, the highest dune in the Namib Desert and second-highest in the world, rising about 325 metres high.

You can also race through the desert on quad bikes for an adventurous way to experience its haunting vastness. Or, go on a hot air balloon safari to get a full view of the desert from the sky. 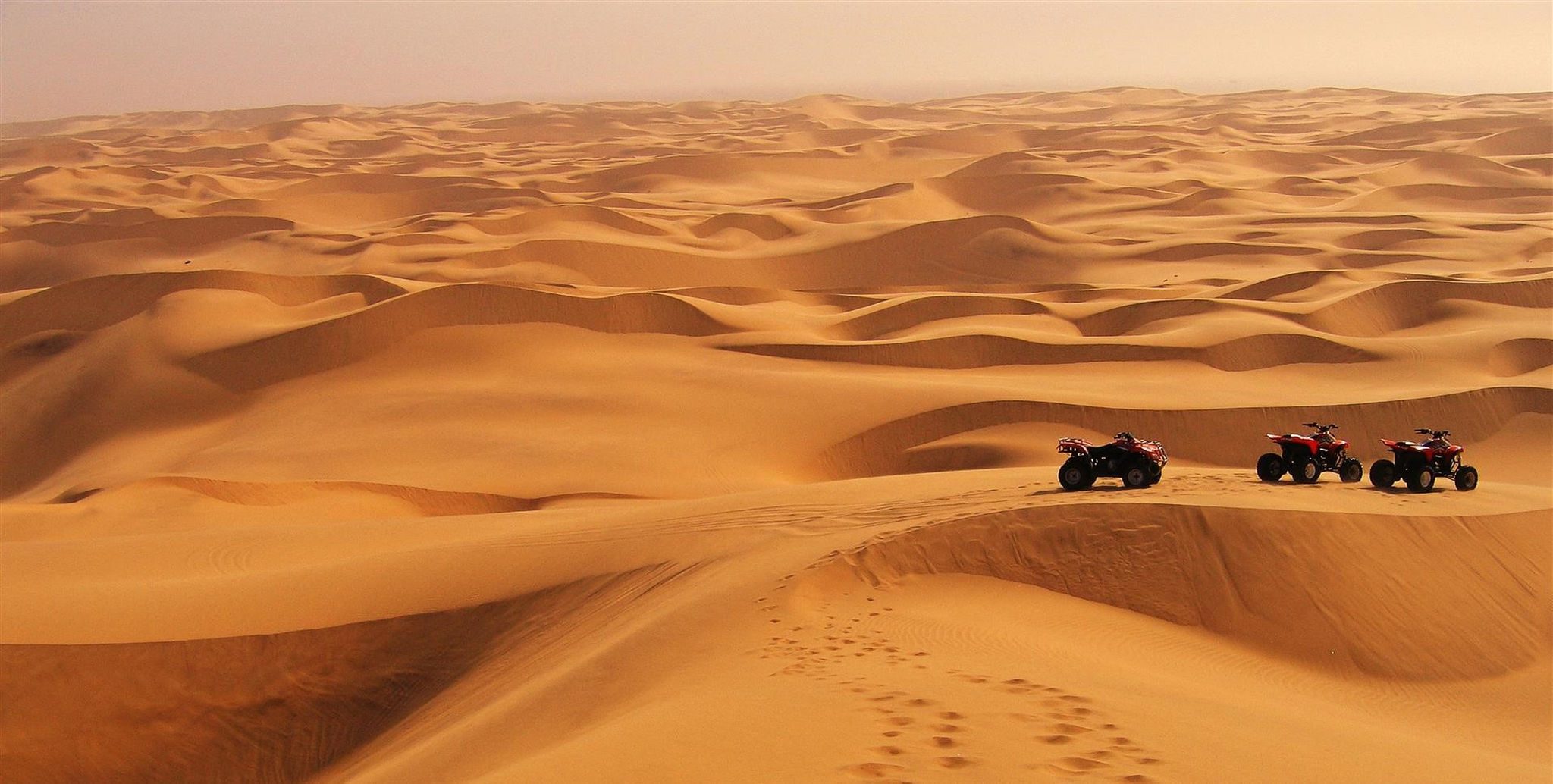 Explore the dunes in more ways than one

From the desert, venture to the watery world of the Caprivi Strip. Sharing borders with Zambia, Zimbabwe, Botswana and Angola, as well as being surrounded by the perennial waters from Chobe, Kwando, Zambezi and Linyanti Rivers, it's a unique meeting place for species and cultures alike since six different tribes live here.

Elephant bathing in the Caprivi Region

Picture waterways weaving through riverine forests and flourishing with flora and fauna, luring plenty of birdlife. Four of the Big 5 and an extensive list of antelope and other game also call the Caprivi Strip home.

In an area so spectacular, it only makes sense that there are four different national parks, namely Bwabwata, Nkasa Rupara, Mudumu and Mahango National Parks.

What to Do in Caprivi

We love recommending the national parks in the Caprivi to our guests for their Namibian safaris, in particular for those looking for something a bit more off the beaten track. These national parks are not yet as popular as some of the others in Namibia, like Etosha. As a result, you can enjoy more exclusivity, unspoilt wilderness, and more availability in peak seasons.

Oh, how we adore Botswana! We feel most at peace in her embrace, lulled by her unique sights, sounds, and smells. She's one-of-a-kind, combining polar opposites and scenes that seem to defy logic.

The Kalahari Desert covers 70% of the country. However, in this same country, you'll find the largest inland delta in the world, the Okavango Delta.

The Kalahari Desert covers around 900,000km², the majority extending across Botswana, part of Namibia and the Northern Cape in South Africa. Falling under the larger Kalahari Basin region, with the famous Makgadikgadi and Nxai Pans on its outskirts, it's a spectacular setting featuring acacia-dotted grasslands, plenty of wildlife, and vast open skies that make you feel tiny in comparison. At night, the inky sky is set alight with a plethora of stars, and an incredible experience is camping out under the stars in the Makgadikgadi Pans. 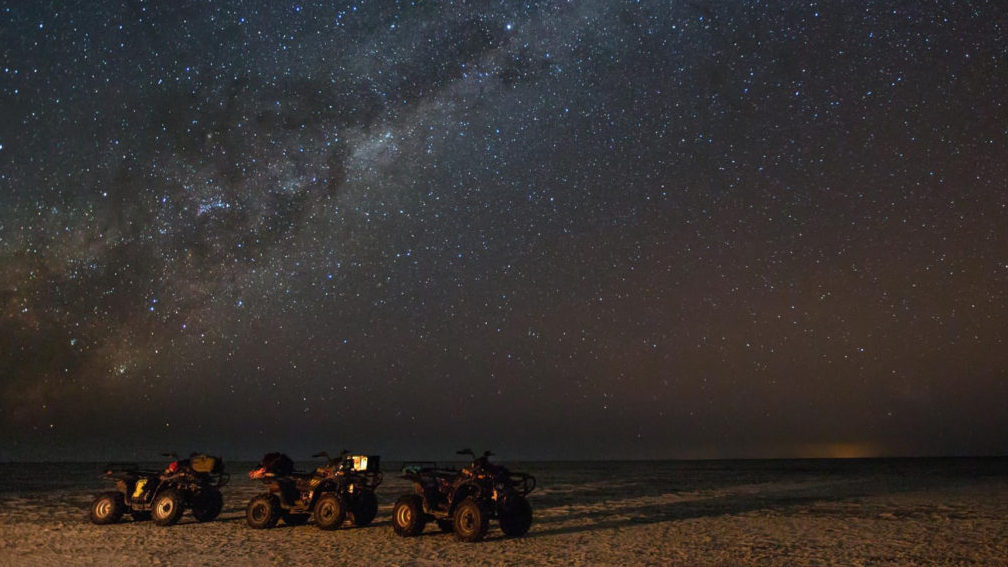 In Botswana's part of the Kalahari Desert, you have access to two game reserves, namely the Central Kalahari Game Reserve and the Khutse Game Reserve. The former is more popular for tourists and the biggest of the two with a higher density of wildlife, but local Botswana residents living in the capital city Gaborone, love visiting Khutse for an easily accessible safari escape that's a bit quieter. 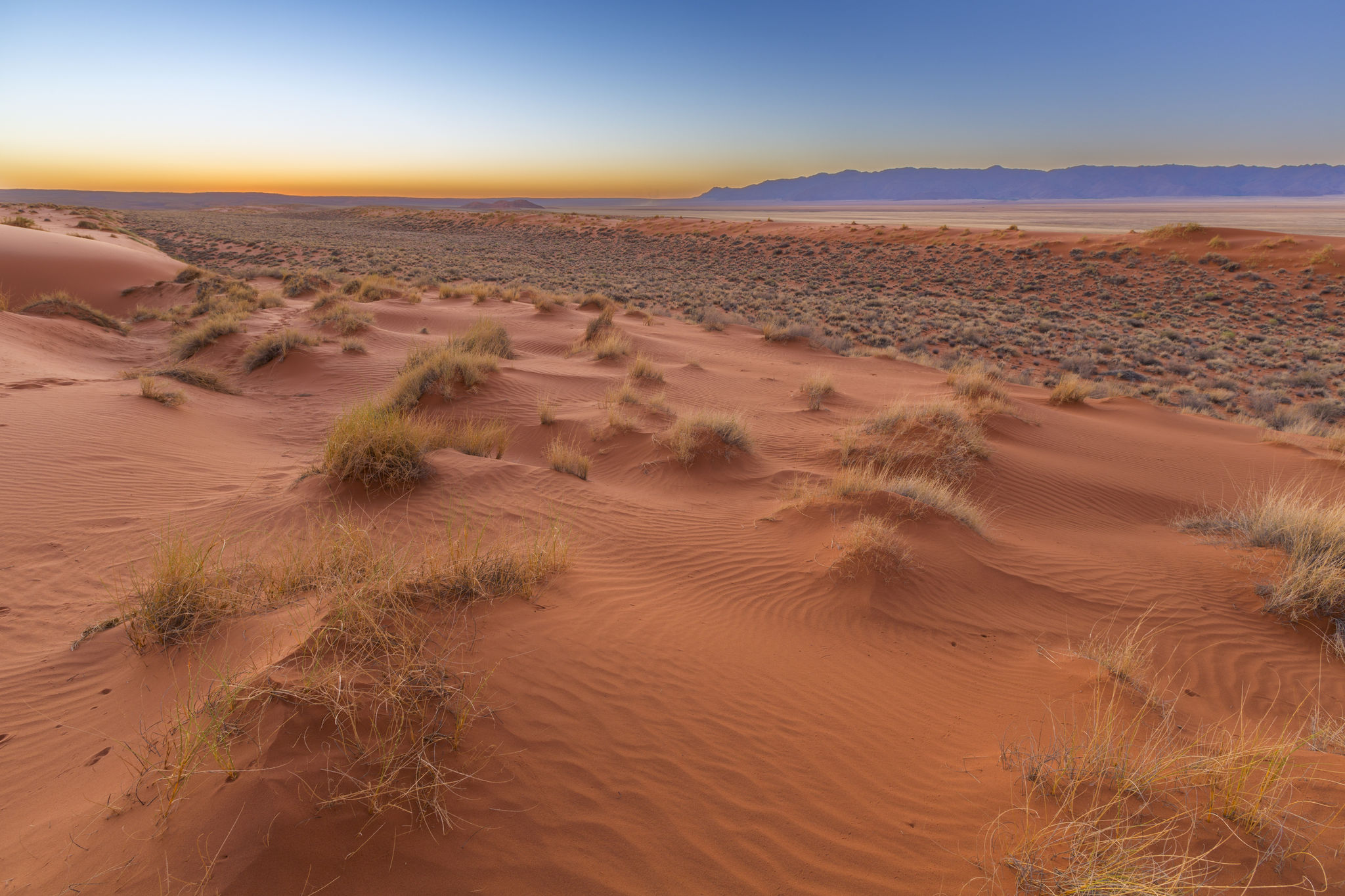 What to Do in The Kalahari Desert

The Kalahari Desert is home to many wildlife species, including rhinos and desert-adapted elephants. There are also plenty of antelope like duiker, kudu, wildebeest, gemsbok (oryx), springbok and then desert species like bat-eared and cape foxes and brown hyenas. Surprisingly, you can also find all of Africa's big cats here, namely leopards, cheetahs, and the famous black-maned Kalahari lions.

You can go on game drives, enjoy horseback riding or quad biking through the Makgadikgadi Pans, and explore the desert with the local San bushmen, a hunter-gatherer society with impressive skills to adapt to the desert's harsh environment. You can also visit the adorable meerkat colonies.

Meet meerkats in the Kalahari Desert

The largest inland delta in the world, the Okavango Delta, has puzzled even the greatest minds by peaking in the dry winter months. And the mystery does not stop there. Known as "the river that never finds the sea", it's home to truly unique species, flora and fauna. 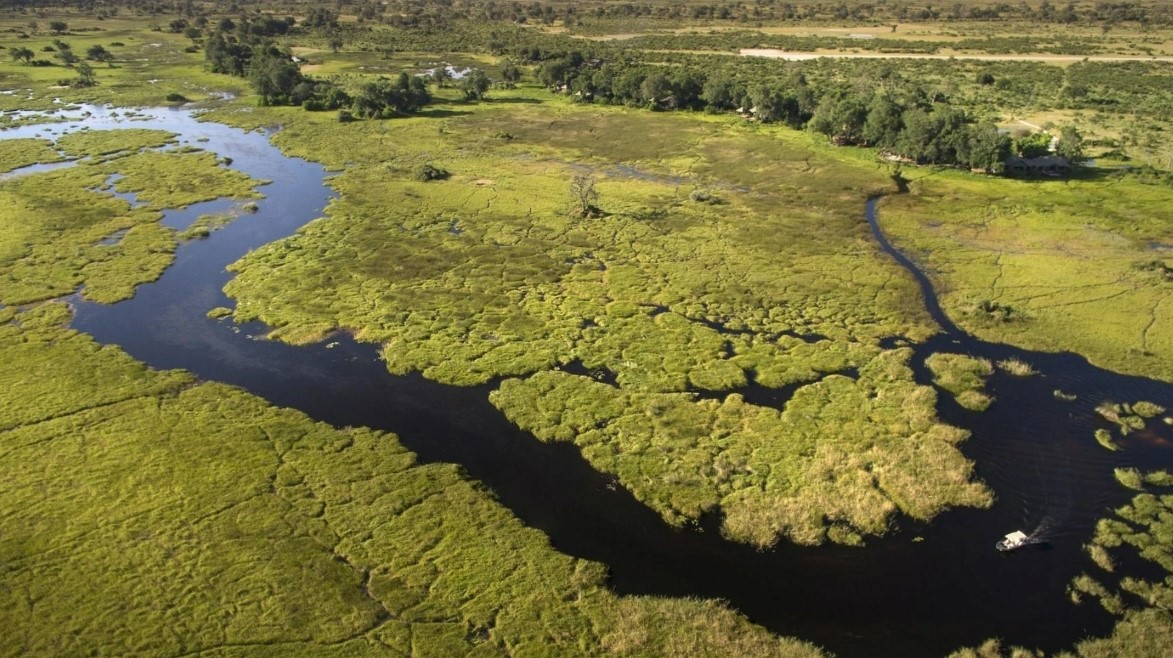 Declared a UNESCO World Heritage Site, it's appreciated in particular for how the native plant and wildlife species synchronised their biological cycles with the Okavango Delta flood, which they call "an exceptional example of the interaction between climatic, hydrological and biological processes". Furthermore, it's a shelter for endangered species like the black and white rhino, African wild dog, lion and cheetah.

Chobe National Park, on the other hand, is famous for having the highest elephant concentration in Africa. 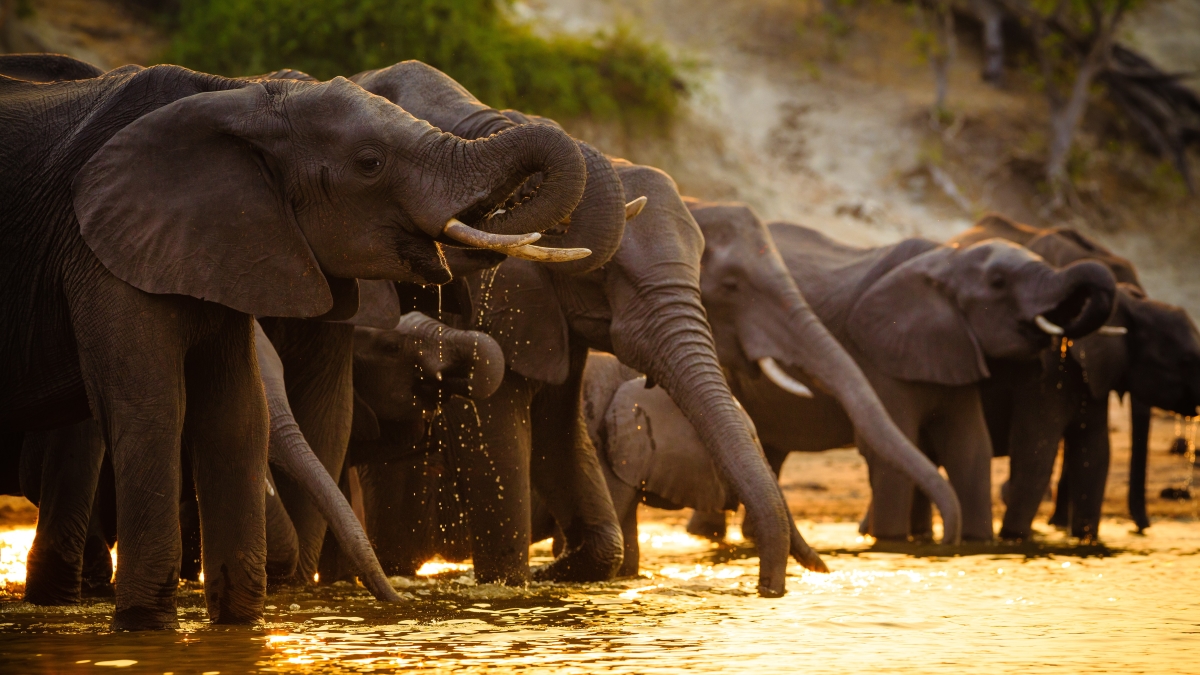 The land of gentle giants

What to Do in The Okavango Delta

Our favourite activity in the Okavango Delta is a mokoro safari, resembling the Venice gondala, it's a dugout canoe. This water-based safari experience is one of the best ways to admire the wildlife! You can also go on boat safaris, photographic safaris, game drives, bush walks, and more.

Why Combine Namibia and Botswana Safaris?

Not only does it make sense logistically since these two countries are located next to one another, but it combines some of the most sparsely populated but wildlife-rich African regions for a truly wild safari.

We love combining these two destinations, and we can guarantee you will too!

Contact our Travel Experts, and they can start planning your dream safari today! With years of first-hand experience and expertise under the belt, they can tailor-make the perfect itinerary just for you.

Tania has always been an avid reader, which ultimately led to her life-long dream of becoming a best-selling author. She loves travelling, super spicy food, South African wine, and cats! When she's not reading with a glass of wine, you can find her at the nearest beach or camping, running or hiking in the mountains.