Challenge4aCause: the cyclists are off

Bags and bikes are packed. Weather’s looking great. Riders have carbo-loaded and trained the heck out of their calves and hamstrings. And today, they’re off!

It’s time for our great Challenge4aCause cycle event to hit the sandy roads and dunes of Damaraland, Namibia, which apparently this time of year is strangely greener than usual, with minimum temps scheduled between 16 and 18 degrees Celsius, and maximum of between 22 and 26 degrees Celsius.

Challenge4aCause is an initiative that we started here at Rhino Africa three years ago in 2009 as a corporate social responsibility project for our staff. As a travel company operating tours in Africa, we realise our business has an impact on the continent’s environment. We wanted to get involved in a project that made a tangible difference to the industry we were working in – that is the conservation of wildlife in Africa.

Challenge4aCause was specifically set up to protect the desert-adapted Black Rhino in Namibia, an animal endemic to Namibia’s Damaraland, where the cycle takes place. Riders cycle through Black Rhino territory. To see rhino in their natural habitat is incredibly moving and inspiring, and instead of just raising money, we’re raising awareness through doing the event.

Unlike past Cycle Challenges, the 2011 Challenge will raise funds for two other charities as well as the Save the Rhino Trust; namely: the Wildlife ACT Fund and GWF (Good Work Foundation). Each participant pays a participation fee and has to raise R20,000 to go towards the charities. The event has been incredibly successful in three years. We want to start looking at a more holistic approach to fighting Rhino poaching as it’s happening in other reserves in Africa too. The big cats are also under threat and we’d like to start applying funds we raise to different charities and different institutions to address the poaching problem in general.

We’re very proud that no poaching has taken place in Damaraland conservancy and we want to maintain that, but also continue to look at other areas where rhino poaching and poaching in general is happening.

How you can help:

Make a donation to Challenge4aCause. No matter how much or how little you are prepared to give, every coin helps! 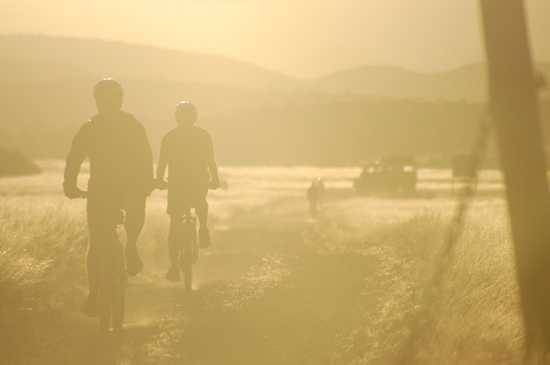 This year twelve riders for Rhino Africa will be joined by four from the Save the Rhino Trust in Namibia. Familiarise yourself with the gang here:

Born in Cape Town, Andy has lived in London for the past 11 years working as an entertainment and media entrepreneur. He has an untameable fascination with the universe and is a self-confessed Frasier fan. Riding for Rhino Africa he is “really looking forward to the bundubash adventure – and for such a worthy cause too.”

Brad is a 22-year old action-adventure junkie hailing from Grahamstown. An avid cyclist he is also South Africa’s reigning freestyle skiing champion and a keen aviator – so he clearly has a problem with gravity. Brad is excited to support such a worthy cause on behalf of Tintswalo Lodges.


Living on a farm in Nelspruit, Brenda and her late husband, Alf, ran an organisation helping thousands of disadvantaged South Africans. Brenda will take up the Challenge4ACause Cycle in memory of Alf and to honour their lifelong passion for Africa, its people, its animals and its beautiful landscapes.

David is the visionary leader of the Rhino Africa Safaris group, one of the leading online tour operators in Africa, which he founded in 2004. Based in Cape Town, David is passionate about Africa, sustainable tourism and wildlife conservation and he would love to personally show everyone in the world this magnificent land.

How could an outdoor and travel enthusiast with a Masters Degree in conservation and resource economics not participate in Challenge4ACause? And how could he not represent Rhino Africa in a fund-raising event in Namibia to eradicate rhino poaching in Africa and develop rural communities?

The flamboyant face of Singita, Jaco is participating in his second Challenge4ACause event in a row. Conservation and development are critical factors for Singita’s success as custodians of a vast piece of African wilderness – and that is why they are sending Jaco on this important mission.

As a civil engineer, 30-year old Jaun will be quite keen to study the gravel roads of Damaraland – if he can make time for that in between contemplating Life, The Universe and Everything. He says, “Representing Rhino Africa in the compassionate Challenge4ACause venture will mark a proud moment in my life.”

Rhino Africa’s in-house videographer, Ryan will document the incredible physical challenge of this event and the footage will go a long way in raising awareness for the Challenge4ACause event and the charitable organisations it supports. He claims he’d rather be cycling so if anyone is handy with a camera…

This betrothed pair has been at Ulusaba for three years: Sam as a guide; Melanie as a yoga instructor and therapist. Driven by a sense of justice and more than a dash of adventure, Sam and Melanie are well-chosen ambassadors for Ulusaba Game Reserve.

Simon’s two great passions are cycling and conservation so we can expect him to lead the Challenge4ACause event from the front. Simon is in charge of Marketing and Operations for the Royal Portfolio and its flagship game lodge, Royal Malewane, is a place where conservation and community development reign supreme. 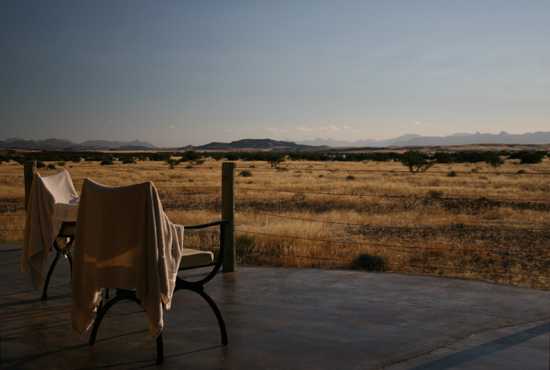 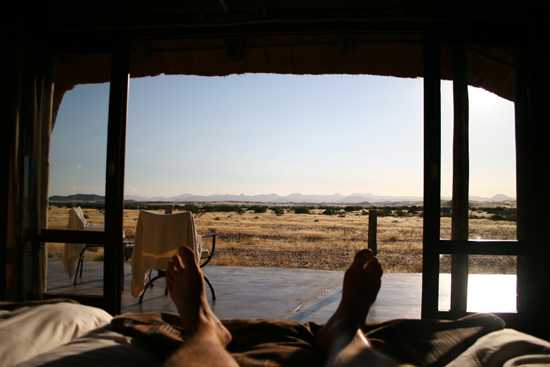 On your arrival at the airport you will be met by your guides. From Windhoek we travel north to Otjiwarongo, Outjo, and Kamanjab over the Grootberg Pass to the heart of the Damaraland. At Palmwag, the start of our cycling journey, relax and receive a pep talk about the next day’s programme.

We usually leave with first light (Namibian 6:00) –  most enjoyable time to cycle. The first day’s cycle is quite easy. We ride along a gravel road 20km northward and enter into the Palmwag Consession Area. Through the gravel planes along the Kwakab River we pass springs and (usually) see plenty game – depending on rainfall. Total distance: about 55km. Then back to the Lodge and later a visit to the “Save the Rhino” Research Centre, depending on availability. 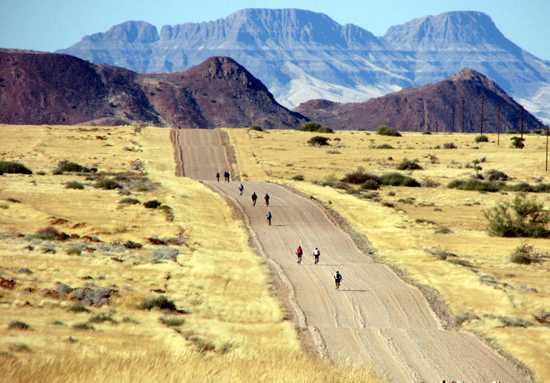 Today we cover quite a stretch to a research camp in the middle of nowhere – aptly called World’s End. We enter the heart of  Damaraland. Wildlife here include: Springbuck, Oryx, Giraffe, Zebra, Kudu and Rhino. Riding today is tough, long but exciting. We’ll lunch under a tree. Fields of endless cobbles make you feel like riding the Paris – Roubaix. We will judge the progress and tiredness of each rider and decide who keeps on riding, as it becomes extreme towards the end, and who takes a scenic game drive to camp. We’ll have built ablutions, running water, comfortable shelter and a structured campsite.

We briefly go back to civilisation and follow one of the bigger gravel roads for 50 km before going back into the wild. Another 20km and a fantastic downhill into the Huab river planes will end our day’s cycle at one of the most spectacular camps on this trip. At the foot of a huge sandstone formation we relax after a long day in the saddle. 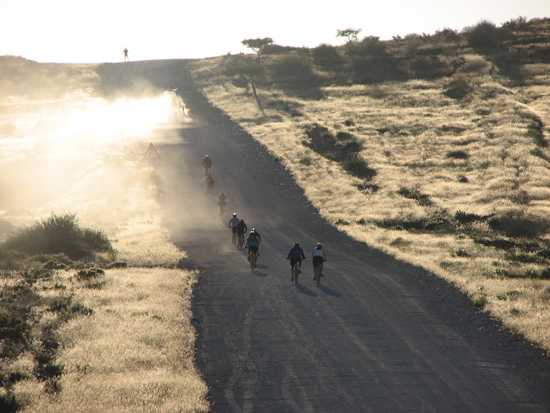 Today is an easy day. We follow the banks of a completely dry Huab river which then changes to a 10km stretch of lush green oasis with natural springs. These springs are the reason why a great population of desert elephants has survived here. After a stop at an awesome viewpoint we head to the most remote camp on this trip. It will take us at least 6 to 8 hours by car to reach the nearest point of civilization and another 4 hrs to the next town. Cliff Camp is a unique place and a short walk up to the top of the nearby mountain will tell you why. Now you are fully aware that you are in the middle of the Namib Desert – ‘desert’ meaning deserted or abandoned – the oldest desert in the world. The feeling is overwhelming – you and you alone – and that by bicycle.

The Namib desert strip runs for over 1500km from south to north about 200km wide and ranges from sand dunes in the south to stone desert, to savannah including the Skeleton Coast, one of the most unforgiving places on earth where many explorers have lost their lives as their ships got stranded here. Today we will cross over a watershed to one of these great rivers, the Ugab River. Here the SRT has established an important research centre. The ride is hard and long but the feeling of conquering this desert will keep you going, plus ending at a fabulous camp with running warm water and camp facilities. 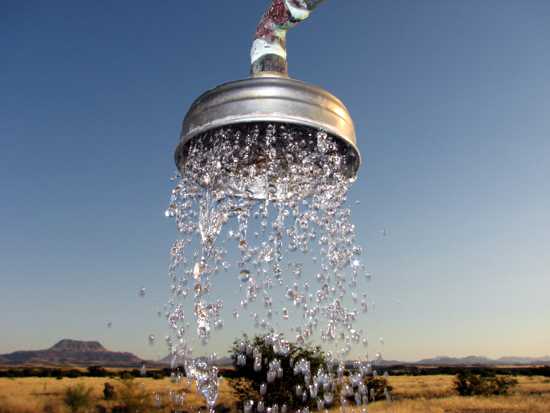 We cross through amazing rock formations around the famous  Brandberg Mountain – a huge dolomite outcrop 10km in diameter and forming the highest point in Namibia of over 2000m.  Another couple of km of ever changing landscape and we’ll pitch the last camp in one of the great dry riverbeds.

The last day of cycling is relatively short and we should be in camp before lunch. A good afternoon rest in a proper bed and then a special function to complete one of the the most special and exciting adventures you’ll ever have done and will remember for long. 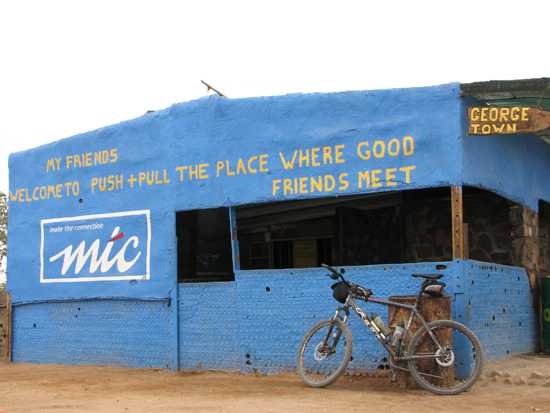 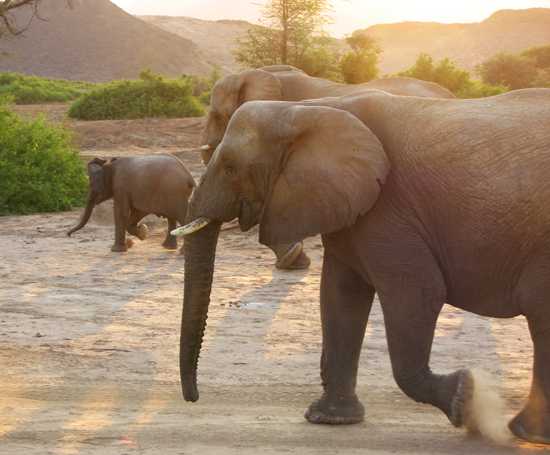 
Rhino poaching is on the up. There are five Rhinos pecies in the world: two in Africa; three in Asia. Two of the three Asian populations, the Sumatran and the Javan, are on the brink of extinction.


It’s large and sophisticated syndicates that service the demand in Asia that do the poaching. There’s a belief in Asia that Rhino horn has serious medicinal benefits. There’s a lot of work to be done in terms of a coordinated effort to reduce Rhino poaching through education at the source of the demand and through fighting crime on the front line as well, and that’s going to require involvement from the private sector and coordinated effort from governments as well. 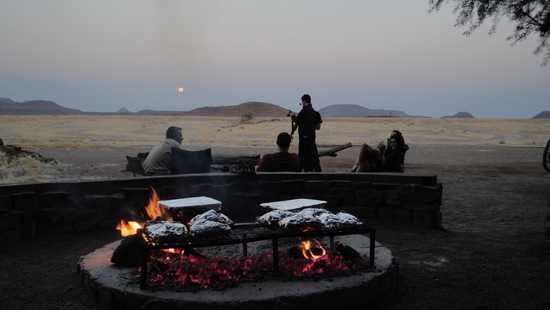 Want to visit Namibia yourself? Speak to us about tours in this beautiful part of southern Africa.

Up for a challenge yourself? Challenge4aCause invites you to participate in our latest Challenge – Cycle Mashatu. This six day mountain biking event takes place in the wildlife rich safari destination of the Mashatu Game Reserve. For more information, click here and contact us at: info(at)challenge4acause.com.

A word of thanks

A huge thank you goes out to all our valued clients who donated towards this year’s Challenge4aCause and especially to our esteemed suppliers who have sponsored the event!

3 responses to "Challenge4aCause: the cyclists are off"