The race is on

Due to the success of Challenge4aCause in recent years, a second event was added to the 2011 calender – Cycle Mashatu 2011. As with C4AC Damaraland 2011, the cycle will raise money for Wildlife ACT, Good Work Foundation and Save the Rhino Trust.

Today 18 intrepid cyclists set off for Mashatu. They will ride down the elephant lined paths of the Mashatu Game Reserve in Botswana for five nights and six days, cycling a total of 50 kilometres a day. They will start and end at Pont Drift Border Post, South Africa.

We’d like to wish all the riders good luck – particularly Ingo Brüggemann from our German Division and Peter Allanson from Lion Roars, featured in the image below before they set off this morning! 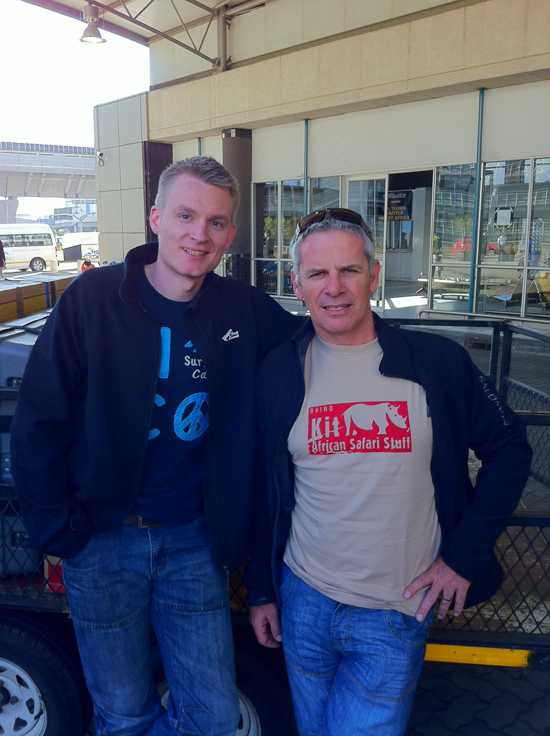 Mashatu Game Reserve is a wholly preserved and untainted wilderness in south-eastern Botswana, at the confluence of the Limpopo and Shashe Rivers. The ample plains range from savannah, to riverine forests, marshland, and sandstone outcrops. Mashatu, ‘Land of Giants’ takes its name from the locally-sacrosanct Mashatu tree and the giants that roam its terrain. As one of the largest private game reserves in southern Africa, Mashatu is, at 25 000 hectares, a fitting setting for the world’s largest land mammal – the elephant. Other than elephant, herds of giraffe, wildebeest and zebra have also roamed the dramatic landscape for thousands of years. Ancient elephant paths provide the single track which interlace a mosaic of savanna, forest, rocky outcrops and wooded floodplains. On the Mashatu Cycle Challenge, riders will also sleep under starlit skies and will encounter ample big game. Thankfully there will be some expert rangers in tow!

Day 1: Meet in Johannesburg, road transfer to wilderness camp
After an long day driving to the destination, riders arrive to chilled drinks, a hot bucket shower and a wholesome dinner. The temporary, low impact, fully equipped wilderness camp provides for an unforgettable night’s rest after a hard day’s ride. Meals are prepared on open fires. Starlit skies and night sounds will awaken the senses.

Day 2, 3, 4 and 5: Explore
After a night under the stars, the riders wake early to freshly brewed coffee and breakfast, before preparing their bikes and heading off to uncharted terrains. They’ll discover new skills as rocky outcrops, sandy riverbeds and open plains test biking abilities. The late afternoon will bring the chance to ride or drive to a nearby sundowner point.

Day 6: Departure
Breakfast on this day brings an end to the adventure followed by a road transfer back to Johannesburg.

If you’d like to experience something like this for yourself or would just like to visit Botswana, then speak to one of our expert travel consultants who will tailor-make your ideal itinerary today.

Find out more about this year’s Challenge4aCause in our blogs and video here.

One response to "Challenge4aCause 2011 – Cycle Mashatu"