So you’ve heard the clichés, the talk of wide grassy plains, incredible sunsets, amazing wildlife, spectacular mountains and breathtaking vistas. You’ve been blown away by the Big 5, seen gorillas in the mist and bungee-jumped off the Victoria Falls. What more could Africa possibly have to offer, you wonder. We’ll tell you exactly what more Africa has to offer, though you may have to get a little wet to fully appreciate the lesser known virtues of this dynamic continent.

“Under the sea! Darlin’ its better down where it’s wetter, take it from me.” ~ The Little Mermaid 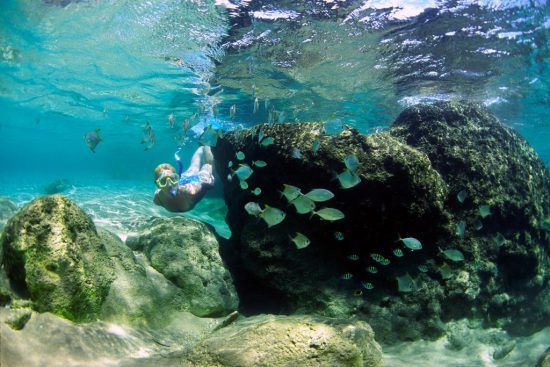 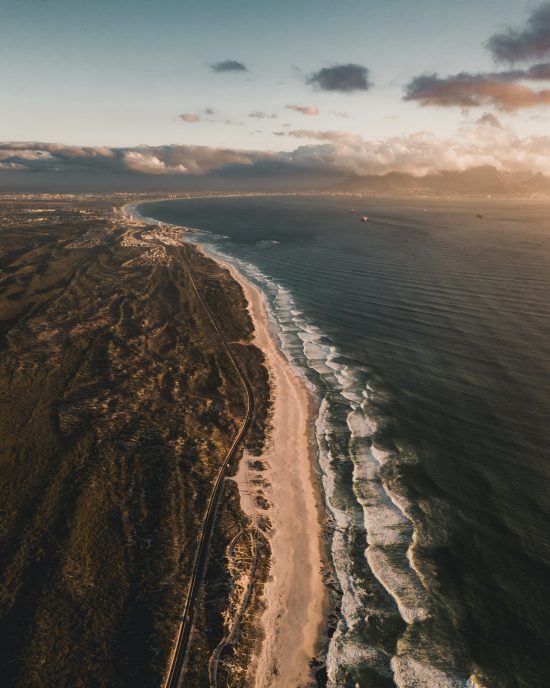 South Africa is a country that celebrates diversity, something ingrained in the very geography of the land. At the tip of the continent, at Cape Agulhas, the cold Atlantic Ocean meets the warmer Indian Ocean creating a unique ecosystem that supports a plethora of unique and diverse marine life. Take a deep breath and dive in as we explore our Top 5 Reefs in South Africa.

The coral polyps are tiny, soft-bodied invertebrate animals with no backbones. Instead, they have a hard, protective limestone skeleton called a calicle found at the base.

With crystal clear water providing great visibility, an abundance of multicoloured fish life, hard and soft coral and stunning topography, it’s no wonder that Seven Mile Reef is considered among the most beautiful dive sites on the planet. The reef, which is located 11km from the launch site, is often compared to the Red Sea dives. Expect to see an abundance of tropical reef fish, huge Moray eels, large schools of pelagic fish, Potato bass, turtles (Hawksbill, Loggerhead, Green and Leatherback), and depending on the time of year, whales (Southern Right and Humpback). If you’re lucky, you could possibly snorkel with Bottlenose dolphins or Whale Sharks on the way to the dive spot! Note that this is a dive for the advanced scuba diver. 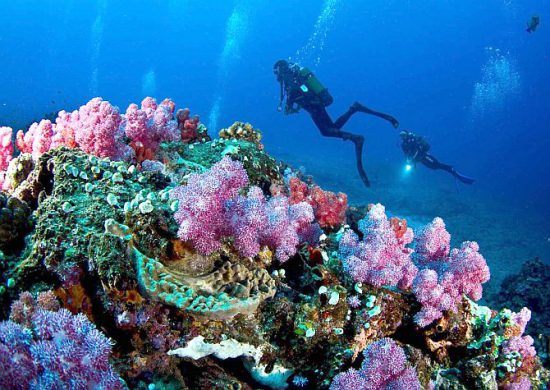 Pinnacles is a unique section of the Aliwal Shoal, consisting of long, spiny rock formations. It is in these formations, gullies, caves and swim-throughs that thousands of species of tropical fish make their home. It’s not uncommon to see Manta rays and turtles float on by, while tropical fish such as Wrasse, Butterflyfish, Angelfish, Chocolate Dip, Dominoes and Two-Bar Clownfish flit about the rocks. Of course, from June to November, the reef shows its teeth and the Ragged Tooth Sharks may take over for a while. The dives on the Aliwal Shoal are all done without cages and afford divers the unique opportunity to see these amazing predators in their natural environment. 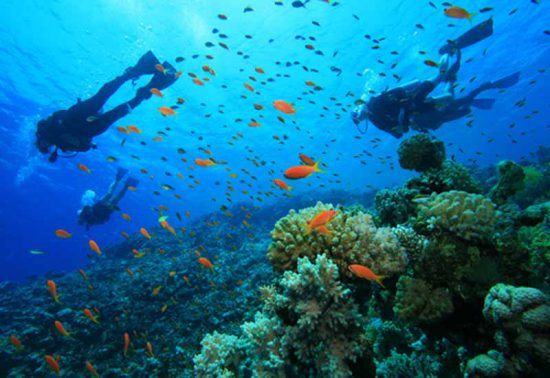 Fishy Fossils
Coral polyps have a lifespan ranging from 2 years to hundreds of years, while corals in colonies are known to live from 5 years to several centuries. Some coral reefs present today are over 50 million years old.

Landers Reef is a hive of aquatic activity, alive with nudibranchs and a huge variety of tropical reef fish. Game fish such as King mackerel, Barracuda, Kingfish and Geelbek (Cape salmon), are regularly spotted along the reef. Due to the 32m maximum depth, a thermocline is often encountered, which means that the water is colder than expected in the east coast region. But we assure you, the view is certainly worth the chill. 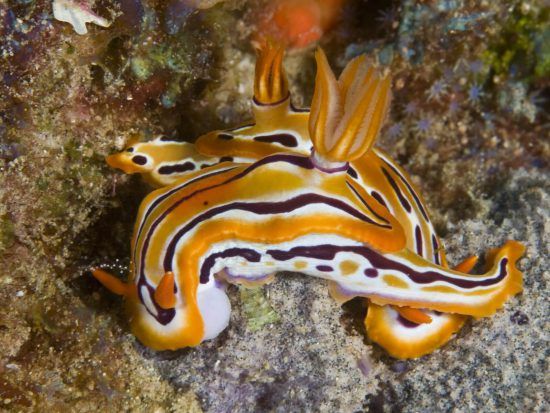 Known as The Greatest Shoal on Earth, this amazing natural phenomenon occurs annually as massive schools of sardines travel up along the coast from the Cape to Protea Banks in KwaZulu Natal. This unbelievable spectacle takes place during the winter months of June and July. The sardines move from the cold Cape waters to the warmer KwaZulu Natal oceans to birth their young. This is an unmissable event! 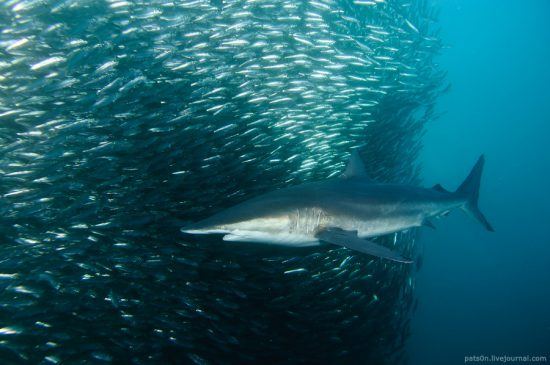 Ready to have some serious fun? The name says it all! Playground is found in Protea Banks, on the south coast of KwaZulu-Natal, and is famous for its prolific shark population. The name is derived from the various rock features which look like something carved from a Disney film. There are features like the Whale’s Tail, Whale’s Fluke, the Clown’s Head and a big swim-through called the Dragon’s Mouth. With water as warm as 24°C, we understand why this seems to be a favoured hangout for those colourful fish and toothy predators. Dive charters focus on two distinct areas – Southern and Northern Pinnacles – which are ranked among the top shark and game fish dives in the world. 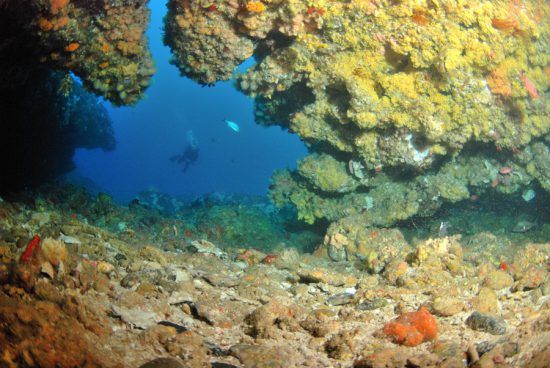 A move further south, down the coast takes you to Castle Rocks, which is situated past Miller’s Point, on the False Bay coast of the Cape Peninsula. The water down here is colder, and the marine life infinitely diverse. Cold-water corals have their own unique appeal. Divers can expect to see a myriad of colour in seafans, basket stars, neon yellow sponges and beautiful sunburst corals. The area is renowned for hosting over 200 species of nudibranches. This is also one of the rare spots where the tropical Doublesash Butterflyfish can be found in cold water. With so much variety and range, Castle Rocks is one dive that should not be missed. 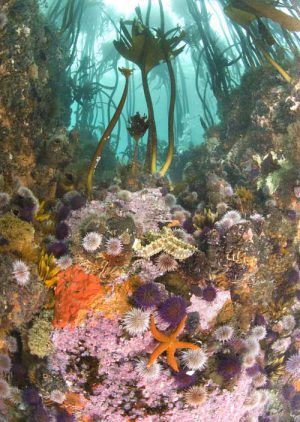 Let Rhino Africa tailor-make your African holiday of a lifetime to suit your budget, needs and style. One of our experienced consultants will give you all the inside information to ensure you get the best experience possible. Get your flippers on and contact us today!

One response to "Africa Underwater: Our Top 5 Reefs in South Africa"