The Great Migration | A Kenyan Adventure

Our Finance and HR Director Jeanne Crous recently returned from a trip of a lifetime – witnessing the Great Migration, the greatest mammal migration on earth, in Kenya.

“The Great Migration has always been on my bucket list,” Jeanne says. “Then a few weeks ago an email was going around the office – pictures of the wildebeest crossing in Kenya. On a whim I forwarded it to my dad, telling him I really wanted to experience it one day. My dad wrote back: “Me too”.  A week later we found out that my dad’s cancer had returned. I knew that this was the time, it was now or, possibly, never. So I booked the trip and my mom and dad jumped on board! Rhino Africa organised the logistics and all we had to do was enjoy ourselves.” 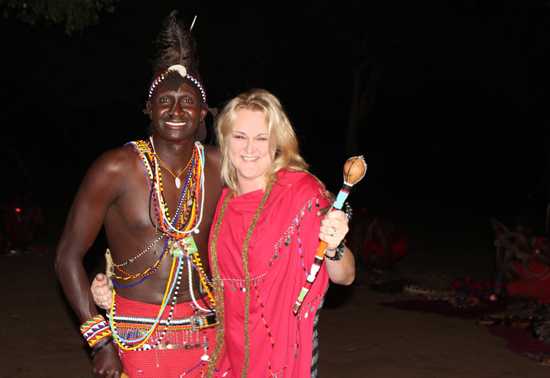 Jeanne and her parents began the trip in Kenya’s capital, Nairobi, staying at the Serena Hotel for one night and then flew to andBeyond‘s Kichwa Tembo in  the western section of the Masai Mara for four nights. Kichwa Tembo is set on a private concession leased from Maasai landlords in the legendary Masai Mara. It is the ideal place to stay if you’re looking to witness the migration, particularly at this time of year (end of August – September).

Find out more about the Great Migration on our website – complete with a map tracking the route!

We caught up with Jeanne – back in the office – to find out what her highlights from this memorable adventure were.

I saw so many animals; it was exceptional. I saw lions mating and a cheetah that had just made a kill with its cub. It was such an experience to see the adult cheetah let her cub eat first. We knew there were lions around the corner and the cheetah kept moving the kill as though it could smell the lions nearby. We also saw a leopard climb up a tree with its kill. The way it went up that tree with such skill and finesse, it was amazing. We saw zebras, Thomson gazelle, hyena cubs, and topi – one of the fastest antelopes in Africa which I had never seen before as they live in the more northerly countries of Africa.

We also saw many bird species including vultures eating a wildebeest carcass (not a pretty sight – you can see why the vulture’s neck is the shape it is, so that it can dig inside its prey).

The elephants made the trip for me – they’re my favourite animal. We could see them right outside our tents they came so close. It was amazing! I love elephants; they’re highly intelligent and are so human-like in some ways. They’re the only mammal besides us that mourn and grieve like we do.

The andBeyond game vehicles are great too. They don’t squash several people onto one vehicle like some safari companies do. They give you a blanket when it gets cold and stop for tea and snacks during the drive. The night drives are a must! I’m pretty sure we saw a baby hippo and ellie walking together one night… although no one will believe me.

The big star of the Great Migration for me is when the animals race across the rivers as fast as they can in swarms. They wait for many days and suddenly cross in a continuous stream. There are a lot of casualties in the river crossings, what with the crocodiles that lie in wait in the water and the fact that the river banks are steep and the animals struggle to climb out, stampeding each other in the process. The zebra crossing was amazing. The wildebeest just went for it, almost without thinking but the zebras were more elegant about it. They were sort of standing nearby, watching what the wildebeest were doing and then did it better, not trampling each other like the wildebeest. It was such an interesting thing to watch.

The Migration is year round but the main event is the crossing of the Grumeti and Mara Rivers, from July to October. So now is a good time to book for next year.

Our sunrise balloon safari was a definite highlight; it was such fun and so exhilarating. You get there before sunrise and are briefed by the pilot on what to expect. It’s so bizarre – you can feel the intense heat of the flame and think it’s going to explode, which, of course, it doesn’t. And you rise slowly and once you’re up there, it is so peaceful. You can see the rivers and the beautiful landscape of the Masai Mara from a totally different perspective. The balloon takes about 11 or 13 people. It was awesome to take pictures of the other hot-air balloons floating in the distance. The landing was smooth but we did have a giggle when we landed on a termite hill.

After the balloon ride we were escorted in safari vehicles to a champagne breakfast in the bush, which was such a delight. They even had a chef baking us pancakes with chocolate syrup. 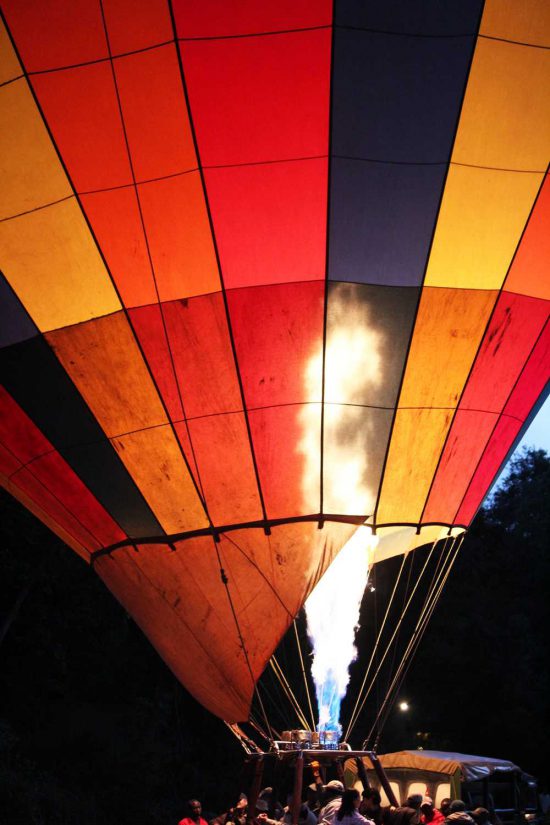 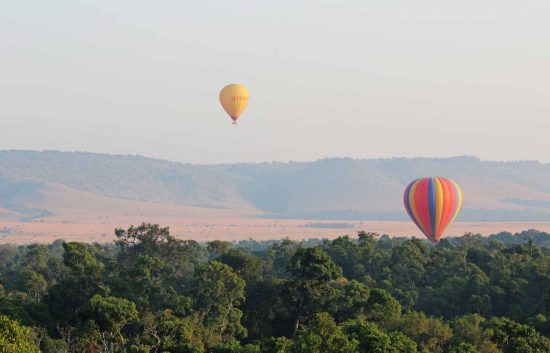 Sharing it with my Parents

My parents absolutely loved the trip. It was amazing to share such a unique experience with them. This was the first trip I’ve ever taken with both of them outside of Cape Town. It was a definite bucket list experience and the second best experience I have ever had – after a rhino tracking and monitoring trip in KwaZulu Natal. On a sentimental note, I highly recommend making sure you see and do the things you’ve always wanted to with the people you love the most before it’s too late.

The service and food at Kichwa Tembo were fantastic. While the luxury tents were great too, I am glad to hear that they will be doing renovations next month. The swimming pool is great and overlooks the bush and animals. The camp offers great activities for kids if you take the little ones with.

The Masai warriors entertained us with a traditional dance during our stay. That was exceptional, watching them jump so high. I’d only ever seen that on TV and in pictures before… It felt so natural because throughout our stay we could see the warriors in their traditional garb, with bows and arrows, surrounding and helping to watch over the camp at night. They work in unison with andBeyond rather than being exploited. I felt very safe. In fact I felt safe during my whole time in Kenya – you can’t even smoke in public on the streets there.

If I have to mention anyone it will have to be our ranger/guide Eric. He was trained by andBeyond and is just absolutely brilliant. He spoke perfect English and took us to all the right spots at the right time. With the river crossing, we got there and saw several vehicles and people that looked like they had been there for hours, but for us it was a matter of seconds before the animals started to cross. It was as though Eric knew, instinctively, when it would happen.

Please Note: The classic tents at andBeyond Kichwa Tembo will be closed for renovation from 15 October 2013 to 31 March 2014. An extensive rebuild is planned at &Beyond Kichwa Tembo but feel free to book now in anticipation of its exciting opening! Should you like to visit the camp before renovations are complete, you will be accommodated in the luxury tents or at &Beyond Bateleur Camp, the sister property.

Other great lodges and camps to stay at close to The Great Migration include:

Our Top Ten Places to Stay in Kenya

Our Top Ten Places to Stay in Kenya