The trick is to hide your fear. The water was cold enough to excuse my constant shaking and could also explain the occasional girlish squeal. I held onto my mother’s hand tightly with one hand and the rope with the other (blisters forming from gripping too hard in fright). Everyone knows it’s better to be a momma’s boy than to show an ounce of fear. Fortunately everyone else, including my mother, was having such a good time that they barely noticed my anxiety. At least I hope so.

The reason I’ve decided to come clean is that despite a fear of dark water that I’ve harboured since I was a child, I couldn’t help but enjoy myself. Canyoning, it turns out, is proper fun. 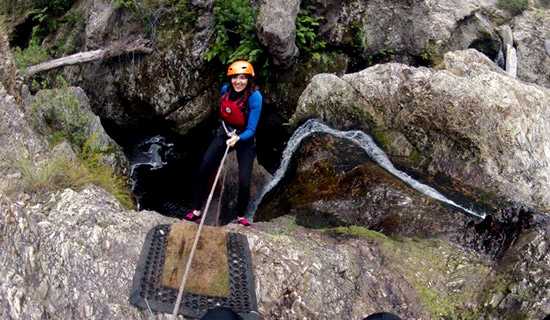 I was in Plettenberg Bay for Christmas and my father-in-law booked a trip with AfriCanyon as a present for all of us. Therein lies the root of my problem, nobody wants to show a hint of terror around their father-in-law. Like a shark to blood in the water, they can smell fear and they’ll never let you forget your shame. I’ve been faking manliness in front of my father-in-law for years: “Sure I know how to weld, who doesn’t?”; “Perfect steak? Coming right up”; “Oh you need some kindling for the fire, no worries I’ll just bare-hand karate chop this log to size.”

And now here I was, surrounded by dark water. Who told him my kryptonite?

Me surrounded by my kryptonite

AfriCanyon is located in the Crags near Plettenberg Bay on the Garden Route. Here you will also find Monkeyland, World of Birds, the Elephant Sanctuary and the Lawnwood Snake Park. It’s pretty much adventure alley. Canyoning or Kloofing is an adventure activity where you descend into the foreboding depths of a river canyon and find something quite unexpected: a beautiful surreal, virtually untouched, landscape quite unlike anything you’ve seen before. You’ll find your way through river pools, slip and slide down waterfalls and abseil steep drops as you follow the river downstream.

We began the day with a briefing at AfriCanyon’s headquarters. Here we were also issued with all the adventure gear we needed. Wetsuits to keep us warm, climbing harnesses for abseiling and helmets to keep our hair ‘just so’. There was a bit of nervousness floating around and we covered it up by making crass jokes about our outfits, none of which I can repeat here, suffice to say that the climbing harness looks a bit like a giant nappy. You can fill in the blanks. 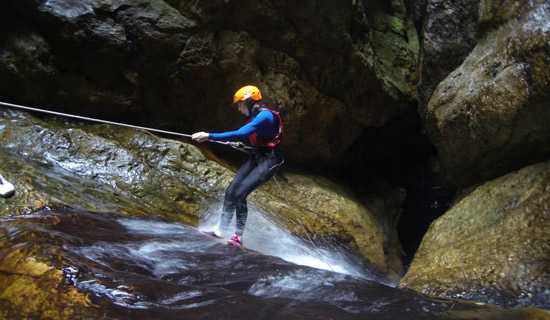 Abseiling down a waterfall. 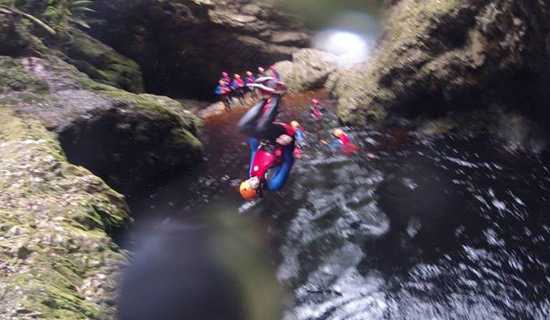 While my irrational fear of dark tannin stained water may have remained, any other concerns were quickly put to rest. These guys really know what they are doing. In their spare time – when they’re not guiding eager adventurers into the depths – they rescue lost mountaineers. Ten years of mountain search and rescue experience and over thirty years of climbing experience went a long way to putting us novices at ease and in no time, we were rearing to go.

Less than ten minutes later we were making our first abseil down into the deep. Not quite Jules Verne but very Indiana Jones. Abseiling is far easier than any of us imagined and we were soon swimming downstream towards the next descent. Above us the pristine natural forest canopy was alive with life. A troop of baboons stopped to watch as our helmeted crew made our way past and as we ventured deeper the forest canopy gave way to steep rock faces populated by tenacious tree ferns, moss so green it glows and the occasional delicate white flower. Driving past this canyon you would have no idea that such an amazing place exists. It’s a world apart and I feel very privileged to have experienced it firsthand. 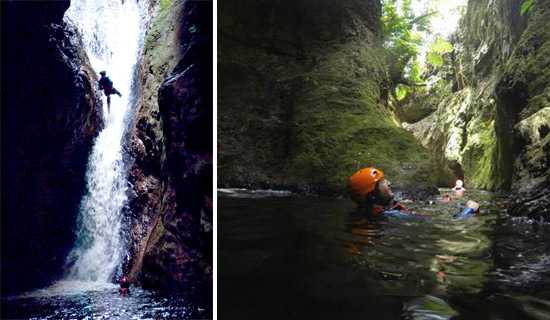 AfriCanyon have spent hours cleaning the river of any rubbish that makes its way downstream. I was told that the pollution, which there is now no trace of, was particularly bad in the sections where the river runs under the highway. They also clear out any invasive plant species, which is crucial in such a sensitive ecosystem.

The trip took about four hours and in that time we abseiled down a waterfall, perfected our front and back flips, floated on our backs watching the sun’s rays pierce the foliage and – being a rowdy family – managed to exhaust our repertoire of witty remarks and retorts. Our guides were knowledgeable about the local flora and their wealth of experience made even the rockiest rappels a breeze.

I managed to face my fear and had an amazing experience. If this sounds like something you would like to do, contact your Rhino Africa travel expert to book your stay on the Garden Route and check out AfriCanyon’s website for details on the activity.

Watch AfriCanyon’s own introductory video here or you can read more blog posts about travelling the Garden Route here.