On nights when I struggle to sleep – when my mind refuses to follow my body’s lead, I don’t count livestock, I imagine a walk I’ve done so many times that it grounds my thoughts. I picture my feet, one after the other, carrying me along Robberg Nature Reserve in Plettenberg Bay on the Garden Route. My destination: the Gap.

If by the time I ‘reach’ it, my thoughts still won’t settle, I follow the trail to the Point. And on particularly restless nights, I walk on, finishing the journey by looping around to the Island.

Anyone who is familiar with the landmarks that inspired these names will agree that whoever christened Robberg’s attractions suffered from a severe lack of imagination. The upside of this void in creativity is that when you break through the shaded trail and find yourself in an opening that shows off the entire bay, you’ll have no doubt that you’ve reached the Gap and when a sign directs you to the Point, you won’t need to ask your fellow hiker whether he thinks you’re heading for the tip of the peninsula, because you’ll already know the answer. But the same is not true of the Island.

When you reach the wide beach that connects an outcrop of land to the greater body of the peninsula, you might pause to question the accuracy of the name because it’s not technically an island. The simple answer to that observation is: who cares – it’s magnificent. Being more romantically inclined, I like to think the name was aptly chosen. That whoever was honoured with the task, first saw Robberg when the tide was very high, when the sea had overtaken the beach, creating a piece of land surrounded by water.

Many visitors to Plettenberg Bay make the mistake of admiring Robberg from a distance. The mistake is not in the admiration – it is definitely worth the attention – it’s in keeping the peninsula at arm’s length because this landmark is best appreciated when it’s beneath your feet. Robberg is – and I don’t say this lightly – one of my favourite places in the world. From its vantage points I have spotted the silhouettes of sharks trawling the shore, witnessed hundreds of dolphins chasing schools of fish, been privileged to watch Southern Right Whales loitering behind the surf and floated in a kayak while enjoying the company of Cape Fur seals that have chosen the peninsula as their home.

As a young girl I remember approaching the end of a hike on Robberg feeling heavy footed. We reached the last climb of the day and I had a problem: my legs had no more gas. My brother and cousins – who were older and stronger – had already summited what was, in retrospect, a gradual incline but seemed impossibly steep at the time.

More considerate than my younger relatives, my parents were hanging back, encouraging me to push on. As mothers so often do, mine had a secret weapon: sweets. Now you have to understand that sweets were not commonplace in our household which is why I couldn’t believe my luck when she offered me a Super C (for the non-South Africans, Super Cs are disks of candy, supposedly full of vitamin C). At that age I truly believed that, as advertised, these sweets had magical, energizing qualities. The orange sweet barely touched my tongue when I felt, instantly, rejuvenated. The placebo effect has never worked so fast – in seconds I had left my parents in my dust, running to join the others. 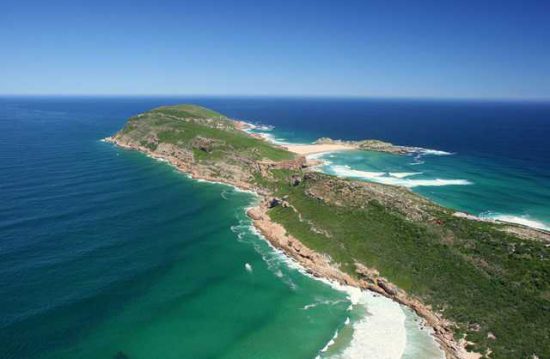 I tell you this story as a disclaimer because part of the reason I love Robberg so much is that, at every corner, I am confronted by a happy memory. With that said, I like to think that even if I stumbled upon the peninsula as an adult, with no childhood connection to the place, its sheer beauty would win me over anew.

From the Plett shops: Drive past the dolphin circle, loop down towards Beacon Isle and follow the road until you reach a circle. Take a right onto Piesang Valley Road. Your next turn is left onto Robberg Road. Stay on Robberg Road until you see a sign directing you left towards the reserve.

From George/Knysna: Just before you reach the main turn-off to Plettenberg Bay on the N2, turn right into Piesang Valley Road. After you pass a row of shops on your right, turn right into Robberg Road. Stay on Robberg Road until you see a sign directing you left towards the reserve.

Have a look at the map below and plan your route:

Tips: The loop to the Point is 9,2 km – in other words, it’s no walk in the park. If you decide that you’re up for the challenge be sure to take water (there is none on the route) as in summer it can get very hot.

Visit our website for more information about the Robberg and the Plettenberg Bay area on the Garden Route, including great accommodation options, and contact one of our travel consultants to plan and book your own tailor-made safari and beach holiday in South Africa’s Garden Route.

Quiz: Share Your Safari Style and We’ll Tell You Where to Go