Dreamy Drives: The Best Road Trips Around the Cape

With its dramatic scenery featuring mountains tumbling into the Atlantic Ocean to its vineyard-dotted terrain in the rolling Cape Winelands, it’s no wonder Cape Town and its surrounds are a regular backdrop for music videos, adverts, and even award-winning movies. We’ve compiled a list of some of our favourite routes that will take you on drives past iconic landmarks and along the most Instagram-worthy vistas in the Cape:

From the confines of Hout Bay, Chapman’s Peak Drive stretches out along the Western Cape peninsula, skimming the mountainside and offering unparalleled views of the ocean. Drivers can pay a toll and drive all the way to Cape Point or grab a picnic lunch and stop at the drive’s turnaround point.

Coastal routes abound in the Cape! Clarence Drive takes motorists from the quaint town of Gordon’s Bay, along Route 44, and through the small hamlets and coastal villages that dot this winding road. This road is said to be home to a whopping 77 bends – four of which exceed 150 degrees.

Route 62 is one of the most popular drives in the Cape and while its full length will take motorists into the country’s interior before coming out at the Garden Route, small portions of it can be driven for those wanting to still head back to their Cape Town accommodation. Starting in the Mother City, Route 62 meanders through the Cape Winelands, onwards into the Klein Karoo, before reaching South Africa‘s lush Garden Route bordering on the country’s Eastern Cape and Western Cape provinces.

This is a short drive and one you can cram pretty quickly into your day. The drive along Signal Hill Road showcases the Mother City in all her glory, from the expansive City Bowl resting beneath Table Mountain, to the Atlantic Seaboard and ocean beyond. This is a highly recommended sundowner spot by locals and tourists alike. Get there early, though, picnic spots go fast! 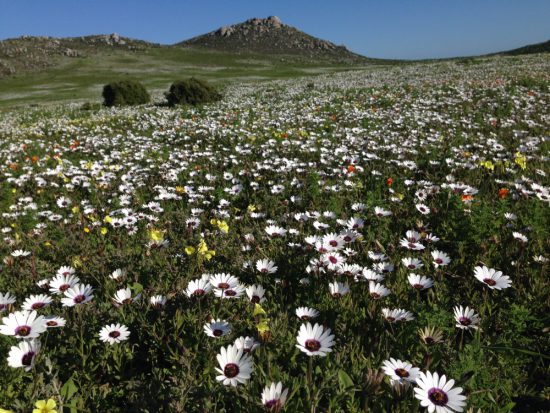 In the spring months, Mother Nature casts her paintbrush across the landscape of the West Coast, leaving a carpet of colour in her wake. The West Coast Flower Route attracts photographers, nature lovers, and road trip aficionados who simply wish to marvel at the stunning views and stop off in the cute towns.

A day in the winelands is always scenic, even on a cloudy day, but for truly stunning views a trip along the Helshoogte Pass is a must. This mountainous road winds between the towns of Franschhoek and Stellenbosch – two of the oldest settlements in the country. Stop at any of the numerous wine farms along the way and enjoy a tasting or two. 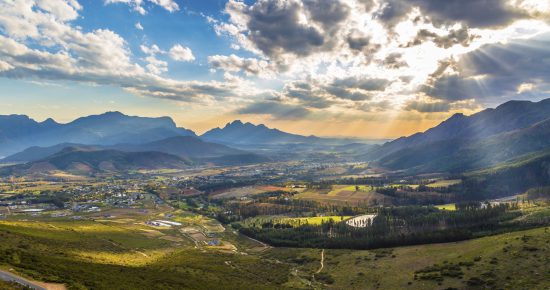 Another scenic drive to embark on when heading towards the charming town of Franschhoek is the Franschhoek Pass. This road runs along rising mountains, plummeting gorges, and past the Theewaterskloof Dam. Built by a group of soldiers under the instruction of Lord Charles Somerset, the pass was completed in 1822 and carried traffic for 100 years before undergoing construction again in 1922. An original bridge arching over a kloof, known as Jan Joubert’s gat, has been incorporated into a more modern one, making it one of the oldest bridges in the country still in use.

In winter, the peaks along the Dutoitskloof Pass are often dusted in snow, best admired while traversing the road between Paarl and Worcester. The surrounding mountains are known for their excellent climbing opportunities, while the pass boasts the impressive Huguenot Tunnel which was built to quicken the journey between the two towns. 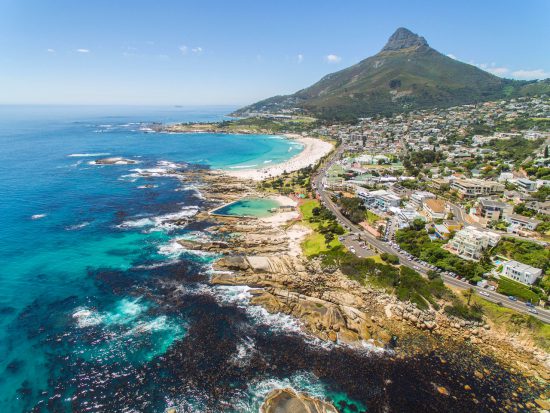 The Atlantic Seaboard awaits you along Victoria Road as it stretches from Sea Point all the way to Hout Bay. Pass the trendy suburbs of Clifton and Camps Bay and be sure to snap magnificent pictures of the Twelve Apostles mountain range. If you’re lucky, you may spot a whale or pod of dolphins frolicking in the waves.

False Bay views are panoramic along Boyes Drive as it snakes along the lower slopes of the Muizenberg mountain. Colourful Muizenberg Beach, with its row of vibrantly painted beach huts and lengthy coastline, is a sight to see with the Cape Flats extending beyond. Bonus: Muizenberg Beach is also one of Cape Town’s premier surfing beaches. Why not hire a board and try to catch a wave? 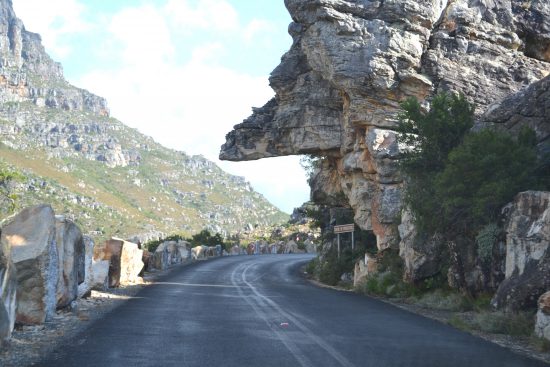 Like something out of a Tolkien novel, Bainskloof Pass’s winding route along green mountains speckled with granite boulders passes between the towns of Wellington and Ceres. Drive along a route once frequented only by horse-drawn traffic in an area declared a National Monument.

Have you done any of these dreamy drives along the Cape? Let us know & comment below. We’d love to hear from you!

2 responses to "Dreamy Drives: The Best Road Trips Around the Cape"