Jonathan sniffed the air, “Can you smell the dead animal?” A second later the smell hit our nostrils, too. It was the rancid sweetness of a rotting carcass, something I was about to become something of an expert at identifying. Over the next two weeks, we would watch the great circle of life unfurl alongside the greatest wildlife show on earth: the Great Wildebeest Migration. 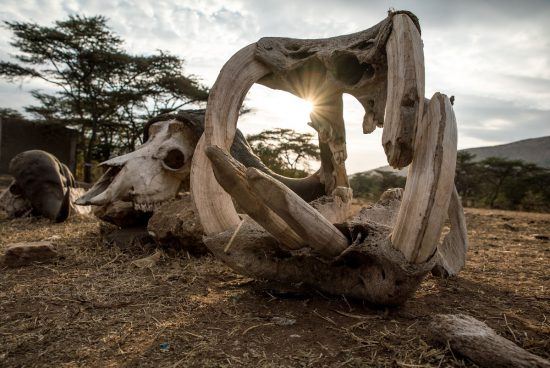 I’d often heard the words ‘rancid’ and ‘sweet’ paired together to describe dead wildlife but it never quite made sense until I’d caught that first whiff myself. Needless to say, it matched perfectly. We’d arrived at a landscape flooded with never-ending lines of wildebeest soldiering across the plains, enduring a perennial pilgrimage as they searched for greener pastures – literally.

And while this spectacle was impressive all on its own, for us, seeing a Mara River crossing was first prize, and thankfully, our two-week trip was planned in a way to give us the best chance of seeing just that. 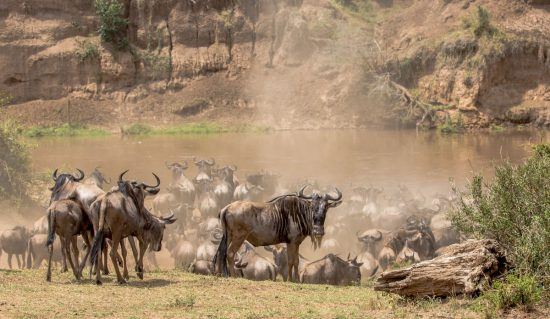 That morning, our small, light aircraft had bobbed through the air and landed on the rust-coloured brush stroke seen from the sky that was the Serengeti‘s Kogatende Airstrip. ‘Serengeti’ is a Maasai word meaning ‘endless plains’ and, as I watched the landscape from above morph from bushy greenery, cattle kraals and villages sprawled far apart, into a carpet of straw-coloured plains as far as the eye could see – I knew I’d arrived. 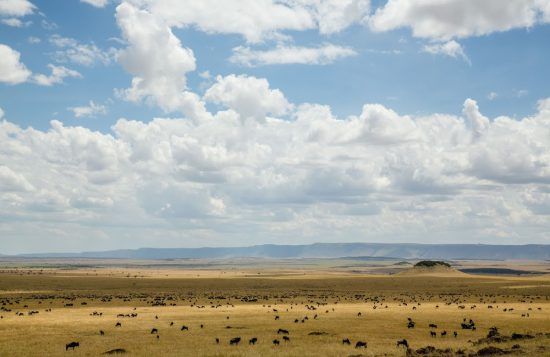 The thought of an East African safari had always conjured up images of days spent exploring savannah grasslands and marvelling at the abundance of wildlife, but, even so, I wasn’t quite prepared for just how prolific the wildlife in Tanzania and Kenya would be. 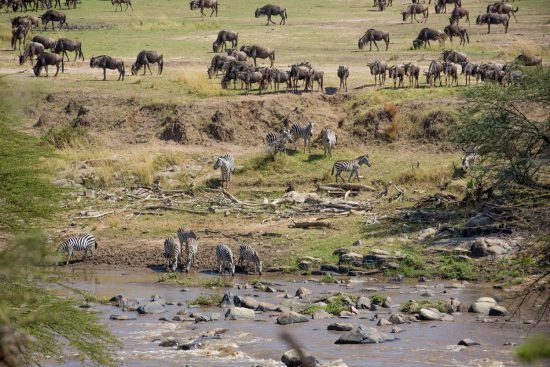 Kogatende is the unsung gateway to the Mara River in the northern Serengeti. A few hundred metres after leaving the airstrip, we crossed the river itself, greeted by its rushing rapids threatening to spill over onto the bridge and a bloated crocodile basking on the opposite bank. Jonathan, our guide, hadn’t wasted any time in asking us what we wanted to see. 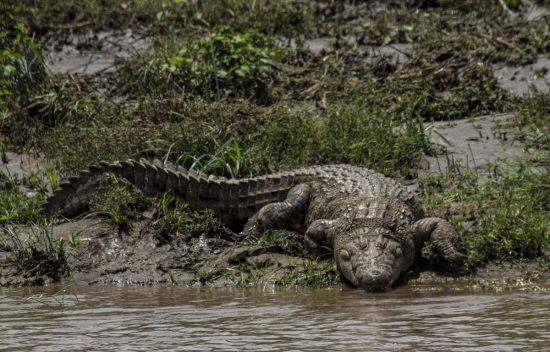 “A river crossing?” came the obvious reply, and I wondered what else people came to the Serengeti to see around this time of year (plenty more, as it turns out). The wildebeest herds, trailed by zebra and gazelle, cross over to the Kenyan side of the Mara River sometime between the months of June and August, tending to move back to the Serengeti around October. “But the river crossing sightings aren’t as good in October,” Jonathan told us as we bumped along in our 4X4 to the banks of the Mara. I took his word for it. 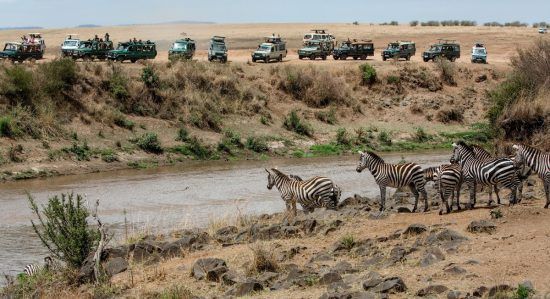 The Mara River extends across the landscape for almost 400 km between Tanzania’s Serengeti and Kenya’s Maasai Mara and its banks are dotted with crossing points throughout. Some of these are more obvious than others, with the constant movement of wildebeest, zebra, and gazelle creating a natural slipway on either end. 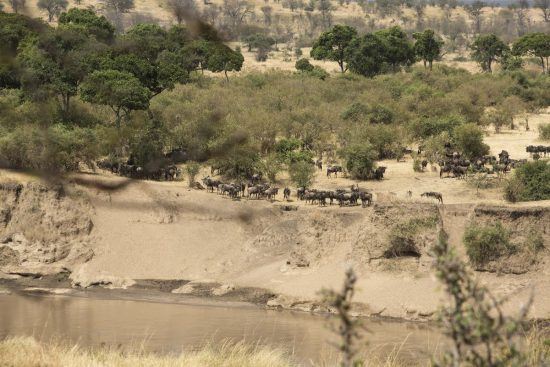 At other points, you’d be forgiven for missing the river and its crossing point completely. Parts of the waterway’s windy path lay shrouded in the secrecy of riverine woodland, framed by steep cliffs on either side, earning it the ominous name ‘death valley’. One thing is certain: crossing the river is a perilous venture.

With the movement of the Migration herds strictly influenced by the rains and, Mother Nature being the fickle fiend she is, different parts of the ecosystem get rain at different times, causing green shoots of grass to pop up sporadically, tickling the nostrils of wildebeest from up to 30km away. 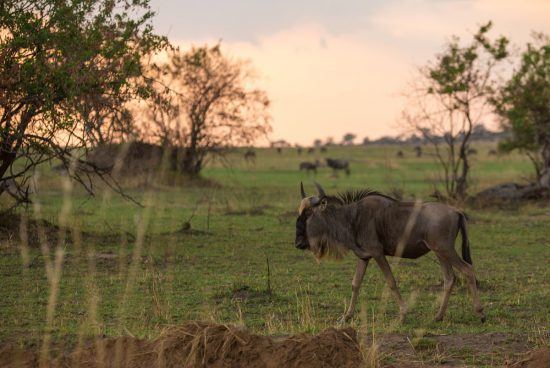 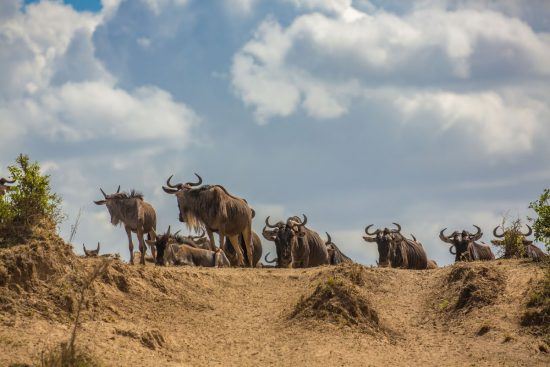 We waited patiently by the river all afternoon, watching herds of wildebeest clamouring at its edge. But there was no crossing on our first day, and I soon learnt that seeing one wasn’t a guarantee, either. Indecisive lot that they are, the wildebeest tend to stall at the water’s edge, spooking easily at noises from the bush and ripples in the water. A few might tease you enough to put a tentative hoof in murky brown water before making an abrupt and hasty retreat. 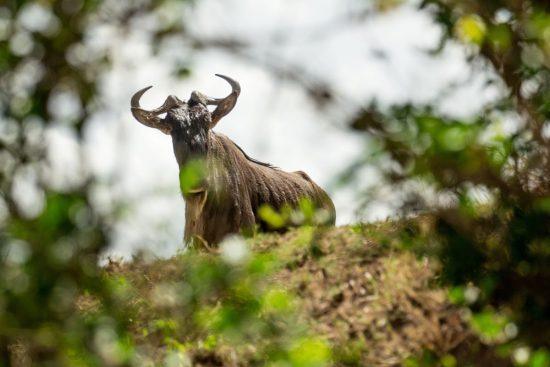 This can go on for hours. Even some of the largest congregating herds jostle each other and push one another towards the edge to such an extent that you’re convinced a crossing is inevitable, only to have a 200-strong herd back away and return to the plains. I soon realised that there was a definite art to catching sight of a river crossing, accompanied with a bit of good old right-time-right-place luck. 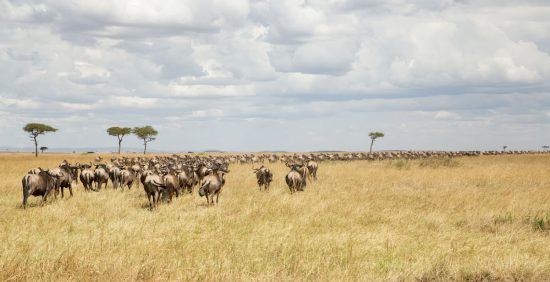 Even though our first day in the Serengeti didn’t feature an age-old pilgrimage from one side of the river to the other, it did feature plenty of other exceptional wildlife. From lions mating, a black rhino and her baby chomping away at the soft grasses of a marshland, to a late afternoon thunderstorm worthy of Toto’s Africa. 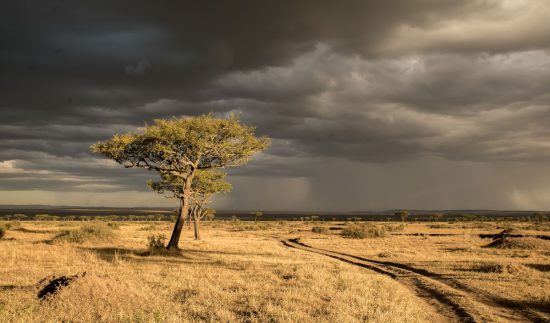 I was far from disheartened as we trundled to camp, the sun slinking behind the spindly halos of acacia trees, as Jonathan navigated our vehicle around islands of boulders floating amidst a sea of tall grass.

After all, this was Africa, and it was only day one.