In the heart of South Africa, between the Cape Fold Mountains in the south and the reefs of gold and silver in the north, lies the Great Karoo, South Africa’s ‘Great Emptiness’. It’s a vast and arid scrub-land of rusted windmills, sheep farms, and small, conservative towns.

Out of this so-called great nothingness lies a game reserve that is as astounding as it is mystical. I recently spent three days at Samara Private Game Reserve and discovered a place of apex cheetahs, Cape Mountain zebras living in the sky, and an engrossing story that is a remedy to our fast-paced days. I was both utterly relaxed and completely enthralled at Samara, a reserve that dishes up the kind of safari magic that sees veteran African buffs returning to it year after year. 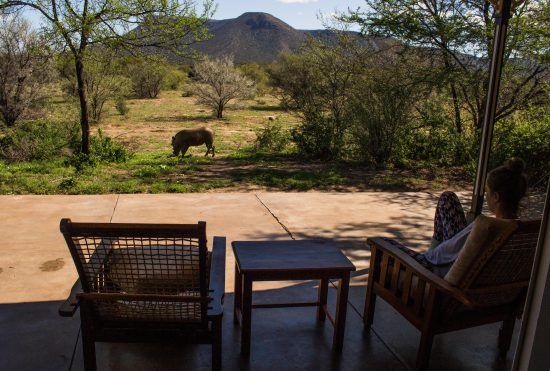 Views into the bush, Botswana

The story of Samara goes back twenty years, when Mark and Sarah Tompkins heard about the Great Karoo and its legend of Cape Lions, large herds of elephant and the migration of 12 million springbok that moved seasonally across the plains where, according to local reports, “the dust that they kicked up took two weeks to settle.” All of this is long gone from the area and Mark and Sarah decided to throw themselves into an unknown adventure to see if they could restore the land to its former glory. 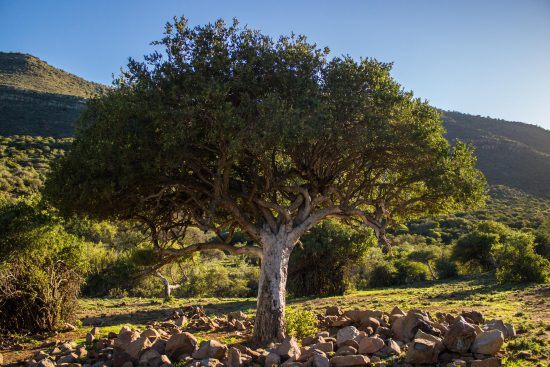 Their first step was to find the right land, which, let me tell you, they did with aplomb. With Samara they hit the jackpot. It’s home to four of South Africa’s nine biomes, a diversity of landscapes that is one of its chief attractions. To put it in perspective, the Kruger National Park, South Africa’s biggest park, is home to just one biome. They bought 11 failing farms near the colonial town of Graaf-Reinett, which David Livingstone once described as the prettiest in Africa, took down the fences and allowed the land to rest for ten years.

They introduced game such as kudu, waterbuck, giraffe, Cape buffalo, and black wildebeest and then took bigger steps, with a focus on endangered species. They introduced cheetah back into the area for the first time in 125 years and then did the same with black and white rhinoceros. They converted old farm houses into luxury lodging, built a few more suites around waterholes and opened their doors. 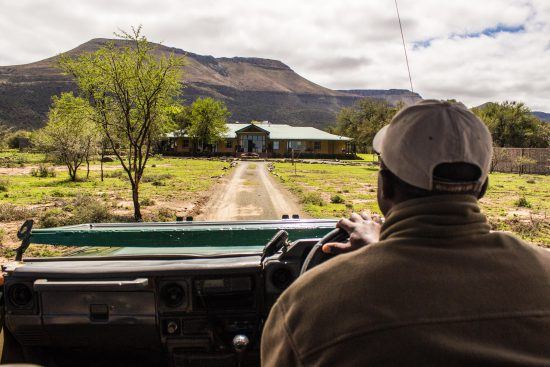 There is something understated about Samara that grabs your soul. It’s a three-pronged attack. Firstly, it’s their unusual and intimate wildlife experiences. Tendai Moyo, a strong and gentle Matabele man, was our guide. He explained, “The Karoo is semi-desert, which means that the land cannot sustain large numbers of wildlife. But when we do see the animals, I make sure the guests have a very good, long look at them and that makes all the difference. We often approach them on foot and spend quality time with the animals.” 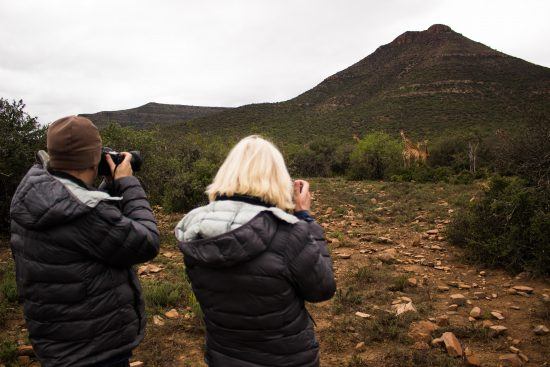 Viewing a giraffe on a walking safari in Samara Game Reserve

On our first game drive, Tendai told us, “Today we are going to look for a cheetah with four baby cubs. We will be able to get as close as five metres away.” I raised a skeptical eyebrow, which Tendai addressed with his next comment. “They are wild but habituated cheetahs. I have known the mother, who is five years old, since she was two weeks old and she trusts me to be near her. Her cubs are still learning this so we will have to be quiet and careful. 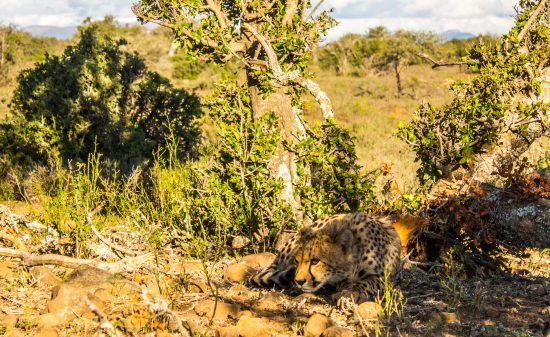 Tendai turned around and started his vehicle. He showed us the blossoms of spring along the way as well as meandering eland and skittish waterbuck. We carefully dodged jaywalking tortoises and stopped to admire prancing blue cranes. With the help of radio telemetry, Tendai was able to get a good sense of where the cheetahs were. 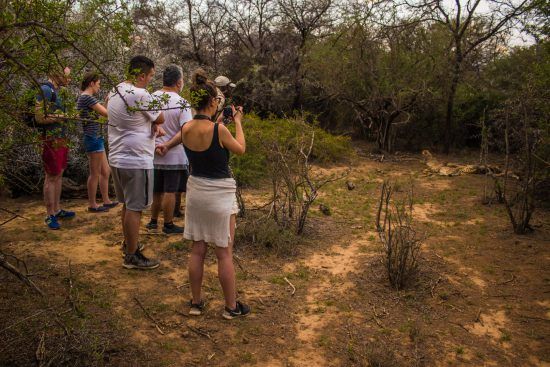 “Come, we walk now,” he said as he parked the open-top game vehicle. Thirty minutes later, Tendai had found his old friend resting with her four cubs under the shade of a tree. We quietly drew closer and closer until we were, as Tendai promised, just five metres away. The cheetahs eyed us with brutal indifference as we oohed in hushed tones and clicked out shutters. As the golden light of the setting sun beautifully caught the hairs on the cheetahs’ backs we made our departure back to the vehicle for a sun downer and to give away to the adrenaline pumping wildly through our bodies.

In addition to the cheetahs, Samara is known as one of the best places in the world to see aardvarks. In the cold winter months these nocturnal animals come out in the middle of the day, which makes for one of Africa’s rarest sightings. Word has spread and Samara’s busiest months are in June and July when visitors flock from around the world. 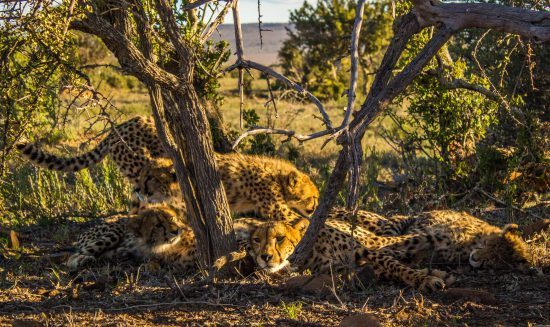 Cheetah and her cubs in Samara Game Reserve

Our next day, we ventured into the southern reaches of Samara in search of rhinos. For two hours we rolled over its land, occasionally stopping to see a meerkat or mongoose, searching for South Africa’s iconic species. Eventually, when the sun peeked out from behind the clouds, we spotted a rhino mother and calf on a far-off plain. We drove nearer, parked, and Tendai told us once again, “We walk from here.”

We crept closer, with nothing but open land between us. A black rhino can be aggressive and, even though it’s nearly blind, will charge almost anything that comes its way. Luckily for us, these were white rhinos and much more peaceful grazers. “Whatever you do, don’t run,” Tendai said with a chuckle. I made a mental note to position myself behind him. At twenty metres out, I was happy with our position. But Tendai, relaxed and confident, encouraged us to get closer. As we did, the mother rhino took a few quick steps towards us, mock charging. The earth shook beneath us and our knees trembled but the rhino came no closer. We stayed there for twenty minutes, watching the mother graze and the baby run in fits around its mother, looking at us menacingly. 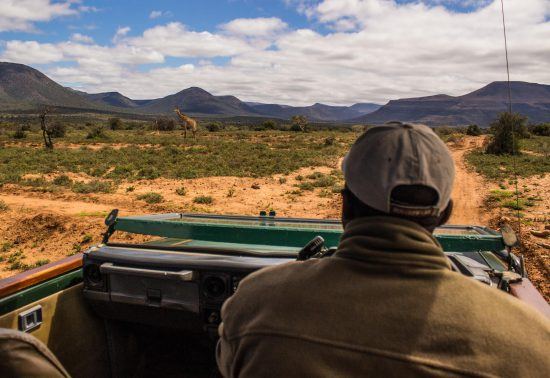 The second aspect of the Samara offering it its inspiring story of conservation, as well as its extraordinary visions to create one of the largest conservation areas in South Africa. The dream is to link Camdeboo National Park in the west with the Mountain Zebra National Park in the east. With its spectacular landscapes and the potential for vast herds of species such as endangered Cape mountain zebra, it would represent, not just a conservation opportunity, but a key regional economic development opportunity through eco-tourism.

Since the original conceptualisation of the idea in 1998 by SANParks, Samara has been seen as a key stepping stone in making this connection, and has served as a catalyst for this grand vision. Yet there are considerable obstacles. The land in between the two national parks is owned by passionate generational farmers unwilling to sell.

Nonetheless, the passion for this vision is a major pillar of what Samara stands for and visitors can rest happily in the knowledge that they are contributing to a game reserve that is trying to expand our wild places in a world that is running out of them. 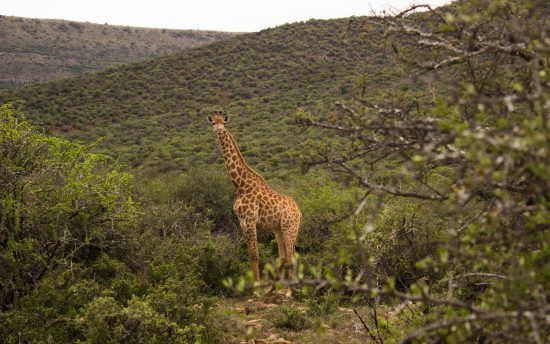 In November, a mating herd of elephants will be introduced and plans are afoot to introduce lions. There are mountain leopards on the property already, and the hope is that as a Big 5 reserve Samara could attract more investment, which would boost tourism and, in turn, conservation.

On our final morning, Tendai took us up onto the mountain as if to illustrate Samara’s third great attraction: its landscape. As mentioned, Samara has four biomes within its 70,000 acres; Savanna, Nama Karoo, Albany Thicket, and Grasslands. 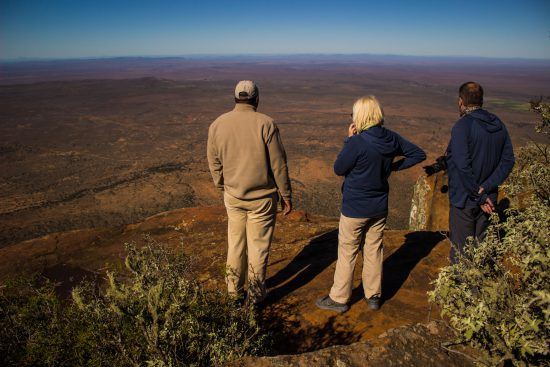 It’s on top of the mountains, 600 metres above the Karoo plains, that Samara holds its trump card. The high-lying plateau is a sprawling grassland reminiscent of East Africa, which as spawned the nickname ‘the Samara Mara’.

This Serengeti in the sky is home to herds of galloping wildebeest, pods of the strikingly beautiful mountain zebras, and views that stop a conversation in its tracks. It’s difficult to imagine a more peaceful place.

We explored the area slowly, savouring the experience, growing quiet due to our imminent departure. At Eagle Rock, we were granted a comprehensive view of this special place. A place that we have promised to return to.