Get to Know the Remarkable Animals of Botswana’s Epic Wilderness

Blessed with some of the greatest wildlife spectacles on earth, Botswana is one of Africa’s greatest treasures. From the Okavango Delta to the Kalahari Desert, Botswana is a wildlife wonderland that is both immense and beguiling.

It is in these iconic landscapes that the ruthless nature of the animal kingdom is truly revealed, as well as its beauty. These five classic animals of Botswana are examples of just that.

The Buffalo-Hunting Lions of Duba Plains

On a marshy island in the Okavango Delta, a pride of lions live in close contact with a herd of Cape buffalo. This unique habitat has led the lions to adapt their hunting skills, and the buffalo have become their primary source of prey. Instead of hunting at night, or at least in the cool hours of dawn and dusk, these lions hunt in the middle of the day. The nine lionesses of the Tsaro pride rarely let the herd out of their sight and attack their adopted prey with little of the usual stealth or caution. When hunting, they run directly at their prey. Each month the lions kill about 22 members of the resilient herd that numbers more than a thousand.

The buffalo are not easy to take down, though and have learned to fight back against the lions as a unit. The buffalo are capable of fleeing the island, and do so during the dry season, but they always come back and their ongoing epic battle with the lion pride wages on.

The Wild Dogs of Northern Botswana 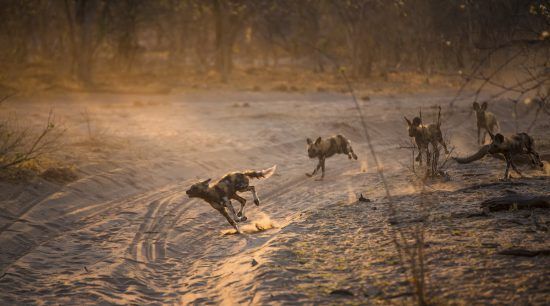 The extensive region of Linyanti, Savuti, Kwando and Selinda in northern Botswana holds one of the most significant populations of wild dog on the continent and has offered excellent sightings for many years. Witnessing the social dynamics and interactions of a pack of wild dogs is one of Africa’s most arresting scenes. It is a true delight to have an inside glimpse into their pack dynamics and see them at play.

Anywhere in northern Botswana is a solid bet for a wild dog sighting and some of the areas have a reputation as a place to see wild dog dens. Sometime in the dry winter months of May to July, the pack’s alpha female settles into an abandoned porcupine burrow and gives birth to up to ten pups. Fed and looked after by the whole pack, the puppies are adorable and often emerge from underground, yawning and blinking in the sunlight as the day warms up. 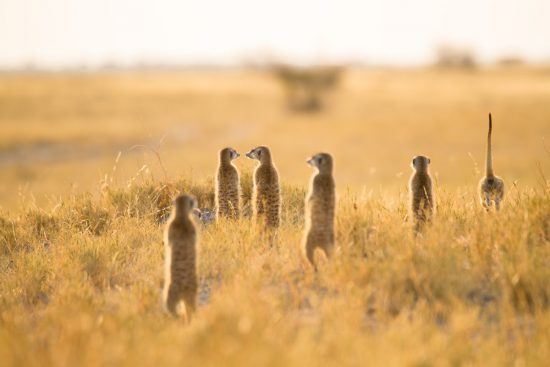 The Makgadikgadi Pans are the remains of an ancient super lake that’s believed to have covered a vast percentage of Southern Africa. The pans crisscross their way across the barren wilderness. In the dry season, the pans are an empty, almost apocalyptic collection of cracked mud, but in the wet season they become an oasis and a haven for wildlife as animals flock to the watering holes.

One of the great attractions here is waking up with the meerkats. Visitors are up at dawn to witness the meerkats scurry out of their burrows in the harsh morning light. They trickle out and climb onto sandy mounds and face the sun in an effort to warm up, and before long visitors are rewarded with their entertaining antics as the whole clan goes about their morning business.

Some forage for insects, some bask in the morning sun and the younger ones tumble around and play with each other. The meerkats are adorable and the best part of the experience is when they have adjusted to your presence and start to climb on you for the best lookout point.

The Elephant-Eating Lions of Savuti 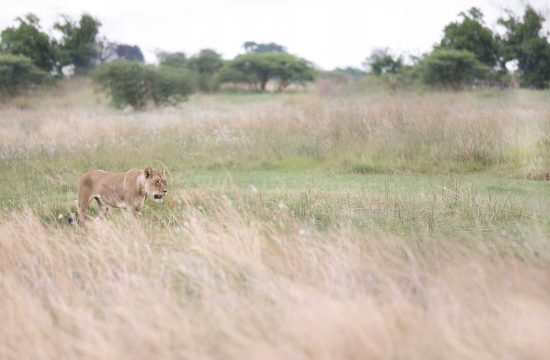 Savuti is a remote area of the Chobe National Park and is spectacular in the dry season. There are massive herds of buffalo that number up to 2,000, and large numbers of elephants and lions. The large elephant bulls that frequent the Savuti Marsh are aware but seemingly unafraid of the lions, but younger elephants have more reason to be concerned.

It is during this dry season that the animals grow desperate. Waterholes become crowded and dangerous places. It is these conditions which led the lions to develop unique hunting habits – preying on the smaller elephants. Sometimes the entire pride is needed to bring the elephant down and they then start eating it while it’s still alive. One elephant will feed an entire pride for a week.

This phenomenon is unique to the prides of the Chobe’s Savuti area, normally occurring late in the dry season. 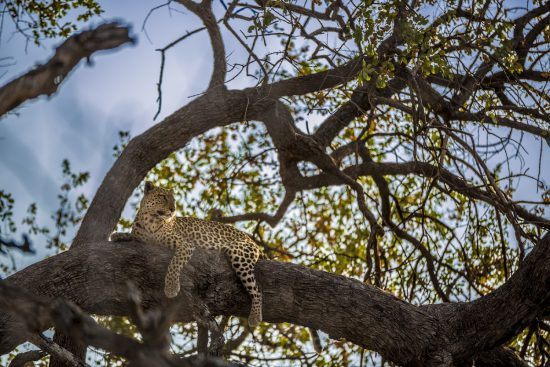 Leopards are the most elusive of the Big Five, but Botswana offers some excellent areas to find these magnificent cats. There are three prime areas in Botswana to encounter leopards; Moremi Game Reserve, Okavango Delta and Savuti Game Reserve.

Leopard sightings can never be guaranteed. Their whereabouts have a lot to do with the water levels of the Delta as they need dry areas to hunt. As the water level rises or drops, they will move accordingly.

Sometimes they can be found in the Delta and at other times you are far more likely to see leopards on its fringes. It’s often in the shallow lagoons and grassy floodplains of the Delta’s outskirts in the tall forest and thick bush that these special animals can be found. Antelope, birds, monkeys and rodents flourish here – as do the leopards.

Further north, far from the Delta, in Savuti Game Reserve, leopards are often found and can be an equally fruitful base from which to search for these great cats.

Feel like exploring breathtaking Botswana for yourself? Get in touch.