Just So Stories: How The Leopard Got His Spots

They say that a leopard never changes its spots. Well, with a coat so beautiful, so unique and so mesmerizing, I’m not sure I’d change my spots either. Follow another one of Rudyard Kipling’s delightful tales as he explains how leopards got their striking spots in his Just So Stories.

In the words of the man who wrote The Jungle Book, Rudyard Kipling, this is his story of how the leopard got his spots (with slight modifications for an easier read):

In the days when everybody started fair, best beloved, the leopard lived in a place called the Highveldt in South Africa. ‘Member it wasn’t the lowveldt, or the bushveldt, or the sourveldt, but the ‘sclusively bare, hot, shiny Highveldt, where there was sand and sandy-coloured rock and ‘sclusively tufts of sandy-yellowish grass.

The giraffe and the zebra and the eland and the kudu and the hartebeest lived there; and they were ‘sclusively sandy-yellow-brownish all over. But the leopard, he was the ‘sclusivest sandiest-yellowish-brownest of them all – a greyish-yellowish catty-shaped kind of beast, and he matched the ‘sclusively yellowish-greyish-brownish colour of the Highveldt to one hair.

This was very bad for the giraffe and the zebra and the rest of them; for he would lie down by a ‘sclusively yellowish-greyish-brownish stone or clump of grass, and when the giraffe or the zebra or the eland or the kudu or the bush-buck or the bontebok came by he would surprise them out of their jumpsome lives.

He would indeed! And, also, there was an Ethiopian with bows and arrows, who lived on the Highveldt with the leopard; and the two used to hunt together. The Ethiopian with his bows and arrows, and the leopard ‘sclusively with his teeth and claws until the giraffe and the eland and the kudu and the quagga and all the rest of them didn’t know which way to jump, best beloved. They didn’t indeed!

After a long time, things lived for ever so long in those days, they learned to avoid anything that looked like a leopard or an Ethiopian; and bit-by-bit the giraffe began it, because his legs were the longest, they went away from the Highveldt. They scuttled for days and days and days till they came to a great forest, ‘sclusively full of trees and bushes and stripy, speckly, patchy-blatchy shadows, and there they hid.

And after another long time, what with standing half in the shade and half out of it, and what with the slippery-slidy shadows of the trees falling on them, the giraffe grew blotchy, and the zebra grew stripy, and the eland and the kudu grew darker, with little wavy grey lines on their backs like bark on a tree trunk. And so, though you could hear them and smell them, you could very seldom see them, and then only when you knew precisely where to look. 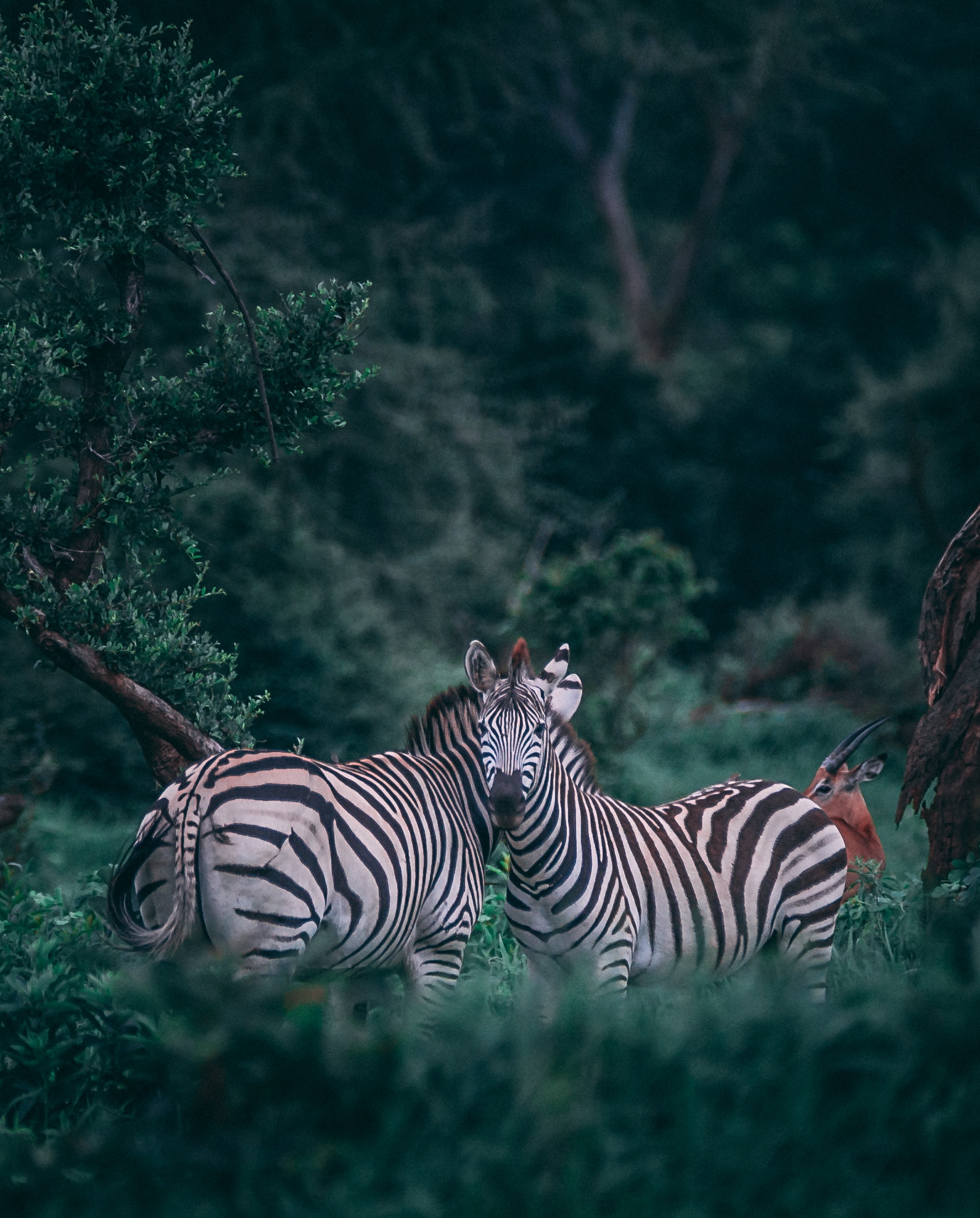 They had a beautiful time in the ‘sclusively speckly-spickly shadows of the forest, while the leopard and the Ethiopian ran about over the ‘sclusively greyish-yellowish-reddish Highveldt outside, wondering where all their breakfasts and their dinners and their teas had gone. At last they were so hungry that they ate rats and beetles and rock-rabbits, the leopard and the Ethiopian, and then they had the big tummy-ache, both together. 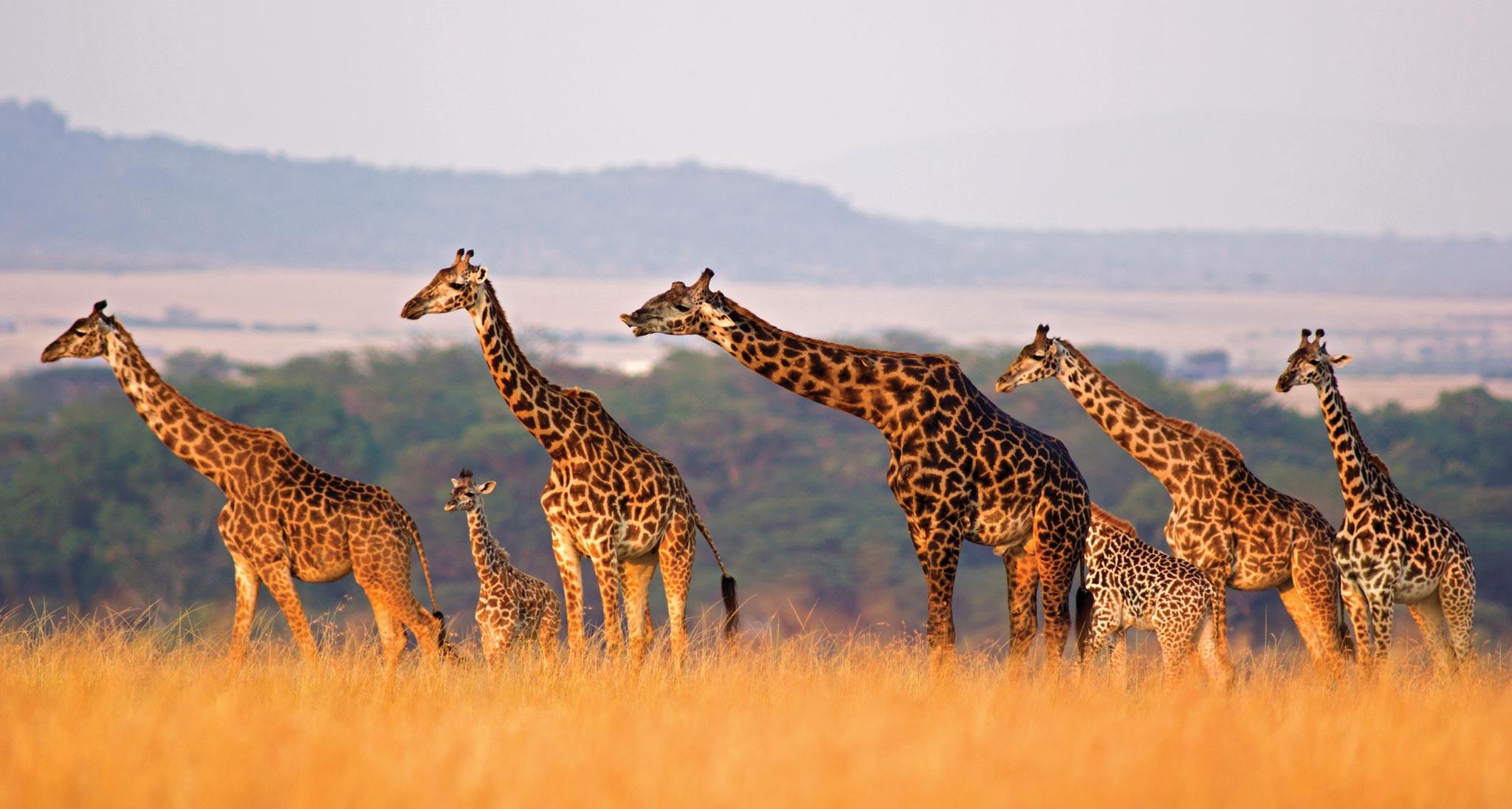 Then said the baviaan, ‘The game has gone into other spots; and my advice to you, leopard, is to go into other spots as soon as you can.’ After ever so many days, they saw a great, high, tall forest full of tree trunks all ‘sclusively speckled and sprottled and spottled, dotted and splashed and slashed and hatched and cross-hatched with shadows. (Say that quickly aloud, and you will see how very shadowy the forest must have been.)

‘What is this,’ said the leopard, ‘that is so ‘sclusively dark, and yet so full of little pieces of light?’ The leopard heard something breathing sniffily in the starlight that fell all stripy through the branches, and he jumped at the noise, and it smelt like zebra, and it felt like zebra, and when he knocked it down it kicked like zebra, but he couldn’t see it. So he said, ‘Be quiet, O you person without any form. I am going to sit on your head till morning, because there is something about you that I don’t understand.’

In the morning the leopard scratched his head and said, ‘It ought to be ‘sclusively a delicate greyish-fawn, and it ought to be zebra; but it is covered all over with black and purple stripes. What in the world have you been doing to yourself, zebra?’ The leopard released the zebra, and the zebra moved back into the forest. The leopard stared, and Ethiopian stared, but all they could see were stripy shadows and blotched shadows in the forest, but never a sign of zebra. ‘Hi! Hi!’ said the Ethiopian. ‘That’s a trick worth learning. Take a lesson by it, leopard. You show up in this dark place like a bar of soap in a coal-scuttle.’

‘Ho! Ho!’ said the leopard. And with that he took the baviaan’s advice, ‘I’ll take spots, then,’ said the leopard; ‘but don’t make ‘em too vulgar-big. I wouldn’t like to look like a giraffe—not for ever so’. ‘I’ll make ‘em with the tips of my fingers,’ said the Ethiopian. Then the Ethiopian put his five fingers close together and dipped them into coal and pressed them all over the leopard, and wherever the five fingers touched they left five little black marks, all close together. You can see them on any leopard’s skin you like, best beloved. Sometimes the fingers slipped and the marks got a little blurred; but if you look closely at any leopard now you will see that there are always five spots—off five finger-tips. 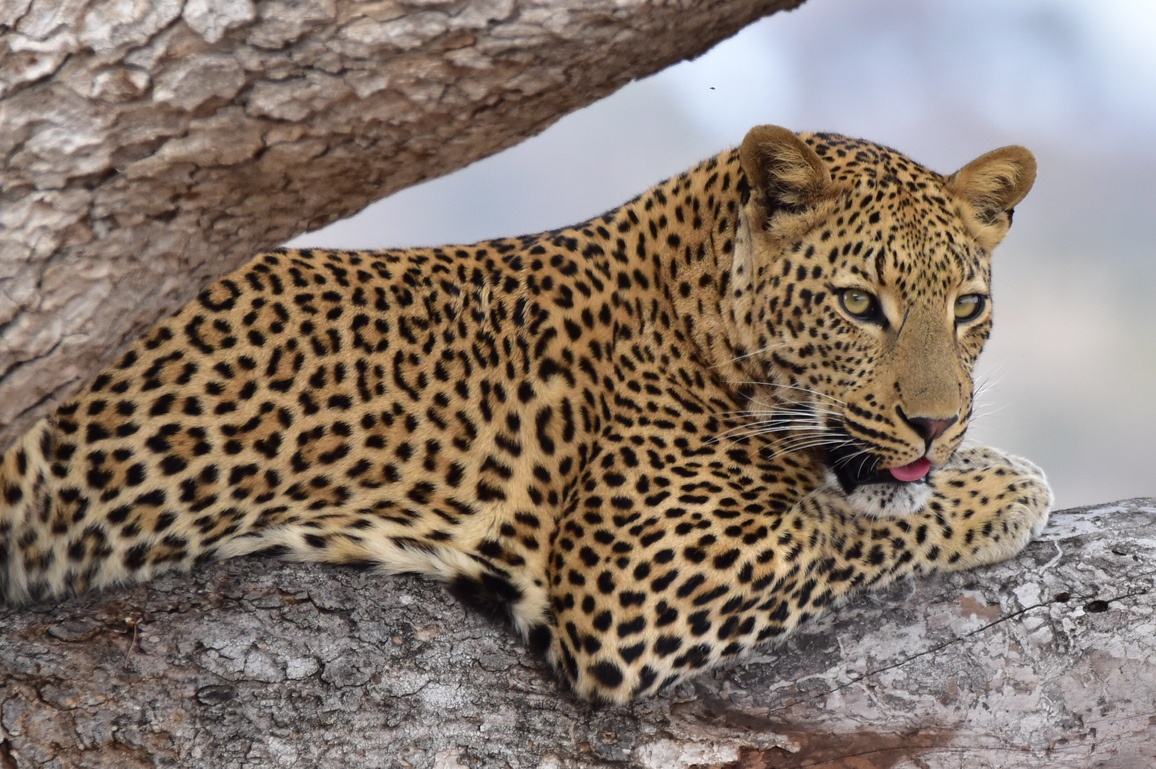 So they went away and lived happily ever afterward, best beloved. That is all. Oh, now and then you will hear grown-ups say, ‘Can the leopard change his spots?’ I don’t think even grown-ups would keep on saying such a silly thing if the leopard hadn’t done it once—do you? But he will never do it again, best beloved. He is quite contented as he is.

Do you know how the elephant got his trunk? Or, how the rhinoceros got his skin? We do!

More leopard-filled articles for you:

Startling Footage of a Leopard Attacking a Warthog