As of 1 December 2018, the City of Cape Town has relaxed water restrictions to Level 3, meaning that the limit per person is now 105 liters per day! This is cause for celebration as all the efforts on the part of citizens and the tourism industry have worked and resulted in higher dam levels (still over 70%) and better precautions for the future. It is completely safe and even beneficial to travel to the Mother City as conservation continues to grow and be supported by visitors.

As we near the end of winter, the dam levels have risen to a staggering 73%! This is way up from the initial crisis level of under 20% at the start of the year. Cape Town is back on the map and we encourage guests to enjoy the summer season without worry as sustainability is still at the forefront of everything we do, even as the dams continue to fill up.

Dam Levels on the Rise

This winter Cape Town has seen two major cold fronts move through, miraculously while the rest of South Africa experiences a fairly dry season. In light of this wonderful change in weather from last year, the tourism industry is banding together to continue efforts in sustainability!

Dam levels have risen by a whopping 6.3% with overall dam storage levels at over 50%. There is no better time to join the #water-wise tourism campaign and support Cape Town’s efforts to nurture a global movement towards water conservation. By visiting The Mother City you are contributing to the local economy as well as ensuring that the industry can build a global network to strengthen their efforts. Don’t fret about being a burden on the system as your consumption is curbed by the joint work of the South African tourism industry and global input against the effects of climate change.

More rains are expected in the coming weeks whilst plans for desalination continue in cooperation with The City of Cape Town, making certain that water scarcity is a manageable and rare occurrence. So come to Cape Town and treasure the abundant natural resources you can help protect by contributing to tourism and the conservation of our national parks.

Watch our video showcasing the abundance of water flowing through our city!

It’s all we can talk about! The skies have opened and sent down a glorious cascade of rains. Cape Town has experienced a torrent of rainfall over the past few weeks, a timely reward from the heavens for the dedicated water saving efforts of locals, visitors, businesses and the tourism industry as a whole. With these developments, there will no Day Zero in 2019. You read that right, none, nada, zilch!

Much has improved since the height of Cape Town’s water woes caused by prolonged drought conditions. Recent reports show that dam levels have exceeded 40% compared to 21% in June 2017. Understandably, conscious travellers have worried about the implications of traveling to Cape Town in the midst of a tricky water situation – with many concerned about making it worse. However, tourism is not only welcomed but critical to the betterment of the situation. Not only do visitors use a minimal amount of water compared to locals (foreign tourists make up only 1 percent of the people in the city, even at peak times) they contribute to the economy of the region as well.

The tourism industry has been one of the most proactive sectors when it comes to putting water saving measures in place. Initiatives such as “save like a local”, which was implemented by hotels, compelled guests to enjoy the city while being as water wise as its inhabitants. Top South African restaurant, Cape Town’s The Test Kitchen, instituted a menu that uses minimal water to prepare,  did away with tablecloths and cloth napkins and asked guests to keep the same cutlery for all six courses among other measures.

The gist of the matter is this: Cape Town is open for business! Visitors do not ‘take away’ from water saving efforts they are essential to them. By traveling to Cape Town, you are keeping the most water wise industry thriving.

To read more about the situation, please see below:

Where is the drought in relation to the continent?

Although Africa is generally a water-scarce continent, the current water restrictions only apply to the Cape region which is found at the southernmost tip of Africa. While it is a stunning city (it’s where we’re based, after all) and a major tourist attraction, it is only one of many exciting destinations in Africa and South Africa itself. 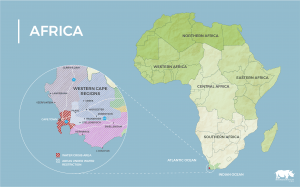 What does Cape Town’s drought mean for visitors to South Africa?

At our core, wildlife and nature inspire everything we do here at Rhino Africa and there is plenty more of that to see in the country which is not affected by drought. Cape Town often forms only one part of the journey trip rather than the entire itinerary. From Cape Winelands to Kruger, Whale Route to Garden Route and onwards into the Eastern Cape’s malaria-free game reserves, there’s plenty to see and do and who knows better than we do? 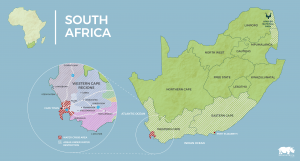 Has the winter rainfall made any difference to the drought?

The rainfall in May and June this year has increased the overall dam levels to nearly 40%, compared to 21% in June last year. While it’s a cause for celebration, Capetonians are still expected to continue saving as much water as possible to allow the dams to recover from the long-term drought. With ongoing winter rainfall forecasted and continued water saving efforts, it is looking very positive.

What does Cape Town’s drought mean for visitors to the area?

The Level 6B Water Restrictions, which came into force on 1 February 2018, will continue to apply. What does that mean in detail? Residents and holidaymakers are expected to use no more than 50 liters of water per day. From our own experience, we can tell you that it is quite possible to shower with this amount of water every day, and still have enough to brush your teeth, cook and wash your clothes once a week. 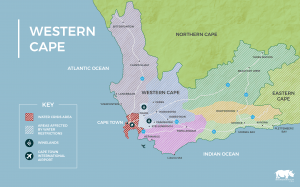 Cape Town remains a vibrant, exciting place to explore, with many of the hotels and accommodation options in the city adapting to water restrictions in a way which will enable visitors to keep the area in their itineraries. Cape Town International Airport will also remain fully functional and is ideally located between the city centre and nearby but unaffected destinations such as the Whale Route and Cape Winelands. The City of Cape Town is also working on small-scale desalination plants, groundwater abstraction plants and water recycling plants in order to reduce consumption further.

Day Zero is a term used to describe a date on which the City of Cape Town will cut the regular flow of the water. The projected arrival of this date depends on water usage level, dam levels and rainfall into catchment areas. Even after the arrival of this date, visitors to the area would still be able to enjoy the diverse, world-renowned experiences the city has to offer.

2. If Day Zero arrives, how long will the ordinary flow of water be cut for?

At this point, there can be no official date predicted as it is all dependent on when, and how much, rain arrives. Cape Town sits in an area where the rainy season can start as early as April or as late as June.

3. How widespread is the drought in South Africa?

The drought and subsequent water restrictions are largely isolated to the City of Cape Town and its immediate surrounds. The rest of the Western Cape is attempting to generally reduce usage to remove some strain on water resources but are not under restriction.

4. If tourists visit Cape Town, will there be water?

Although severely rationed, there will be sufficient supply for basic daily needs such as drinking, toilet usage and other basic hygiene.

5. Will tourists be able to bath, shower and use a swimming pool?

Current guidelines suggest a shower of no longer than 2 minutes but strongly discourage taking baths due to the amount of water needed. Some swimming pools are still available for use, especially if they have been converted to salt water.

6. Will restaurants and bars still be in operation?

Even in the event of Day Zero, most businesses in the hospitality industry have implemented water saving solutions to ensure ongoing water supplies to their establishment. Some have even taken steps to isolate themselves completely from municipal supplies.

7. Will emergency services still function in the event of Day Zero?

Yes. All critical emergency services will continue to be fully functional.

8. Will major events still be staged?

Yes. Any major events have been planned to ensure a zero or heavily reduced water footprint enabling them to go on as planned.

This blog will be regularly updated to ensure the latest information is available to our travellers.

What To Do In Franschhoek: From Bubbly to Bentleys