As we celebrate our spirit animal and namesake on World Rhino Day, 22 September, here are 11 fun facts you might not know about rhinos.

Fact 1: There are 5 species of Rhino

There are five species of rhino that can still be found in the wild, namely the black (5000 animals) and white (19000 animals) rhinos of sub-Saharan Africa, the greater one-horned rhino of India, (3500 animals) the Sumatran rhino (80 animals) found on the Indonesian islands of Sumatra and Borneo, and the most critically endangered rhino of them all, the Javan rhino (60 animals) found in Ujung Kulon National Park in Java, Indonesia. 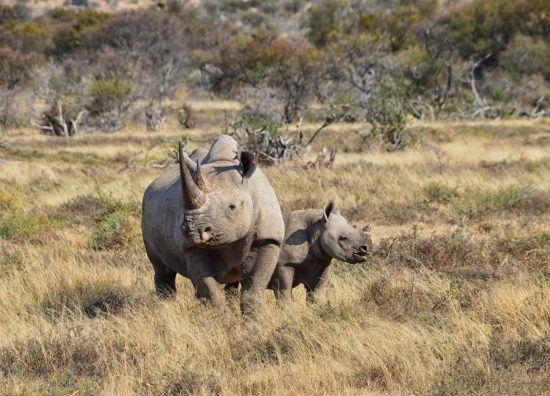 Fact 2: The life of a fly is dependent on a Rhino

The rhinoceros stomach botfly is the largest fly species known in Africa. It is a parasite of the black and white rhino, and the fly depends on the rhinoceros gut for reproduction. The botfly numbers have declined steeply as the black and white rhino numbers have declined through poaching. Like the rhinoceros, it was once spread across much of sub-Saharan Africa, but is today restricted to the savannas of southern and eastern Africa, where the remaining rhino populations roam.

Fact 3: They are huge

Of the five remaining species of rhino, the white rhino is the heaviest, weighing up to 2300 kg (5000 pounds) while the Sumatran rhino is the smallest weighing in at around 1000 kg (2200 pounds). This is mighty impressive considering they mainly eat grass and leaves!

Fact 4: Baby rhinos are the cutest 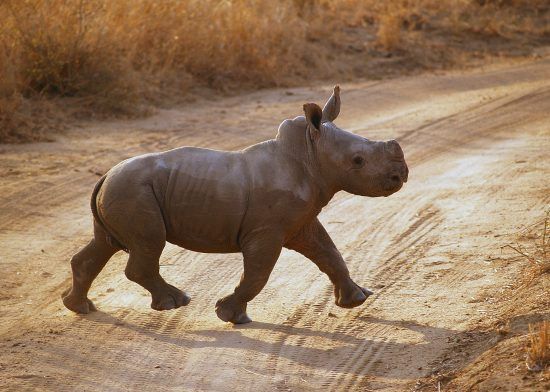 Book a dream safari with us and see cute baby rhinos in the wild, Photo Credit: Tswalu Tarkuni Lodge

Fact 5: It takes a crash to make a family

The collective noun for a group of Rhinos is a rhino crash. That’s why at Rhino Africa we refer to our Rhino family as The Rhino Crash!

Fact 6: Which rhino belongs in the Big 5?

The rhino referred to in the Big 5 is in fact the black rhino. The reason for this is that the Big 5 (lion, leopard, elephant, buffalo and rhino) got their name from being the 5 most dangerous animals to hunt on foot. Fortunately, the majority of rhino hunting today is done with a camera rather than a gun.

Black rhinos have a reputation for being shy, solitary animals that are very territorial. Recent research has indicated they are more social than previously thought, particularly around water holes at night. White rhinos on the other hand are the most gregarious of the 5 rhino species and can often be seen in groups of up to 15. 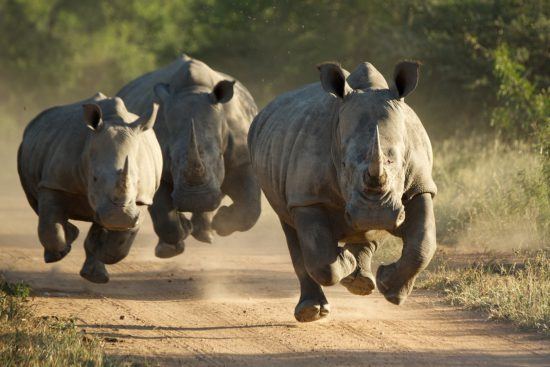 Fact 8: Black and white rhinos are both, in fact, grey

The names of black and white rhinos are misleading – as both are actually grey. The white rhino is said to have gotten its name from the Afrikaans word for wide (‘wyd’), referring to its wide, square lip, in contrast to the black rhino’s pointy upper lip. Early English explorers mistook this word for ‘white’ and consequently named this species ‘white’ rhino, and the other ‘black’ rhino to differentiate.

Fact 9: Their horn is made from the same stuff as your fingernails

Rhino horn is made up of keratin – the same protein which forms the basis of our hair and nails. Javan and greater one-horned rhinos only have one horn, whereas all the other rhino species have two horns. Their horns grow continuously during their lifetime – the white rhino’s horn can grow 7 cm every year – and the record length is 150 cm long! This is why we know there is no truth to the myth that rhino horn contains curative properties. 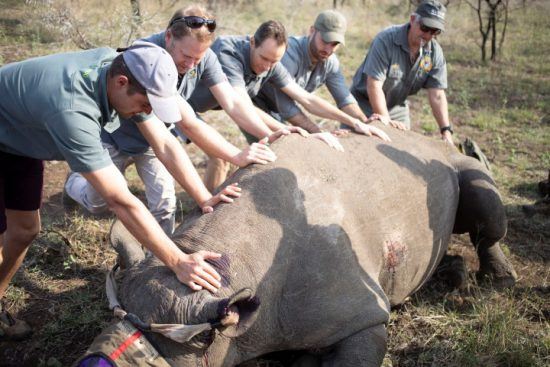 Help us saving the rhinos!

Fact 10: They communicate through sneezes and poo

Rhinos make an array of funny noises when they’re communicating. During confrontations, they growl and make ‘trumpet calls’.  They snort when they’re angry, make sneeze-like calls as alarms, and literally scream if they’re scared. Rhinos also communicate through their poo and urine, using a series of toilets within their territories known as middens.

Just like their Rhino African counterparts who love HUGS, rhinos can often be seen rolling around in mud, giving themselves a protective ‘mud coat’ to keep them cool, stop insects biting and get rid of any parasites. While Asian rhinos are excellent swimmers, their African relatives stick to wallowing in mud for a cool-down.

How to see a Rhino in the wild?

If you want to see either of Africa’s two rhino species in the wild, then look no further than Africa’s leading safari company, Rhino Africa. We specialise in tailor-made luxury travel in Southern and East Africa, including the Indian Ocean Islands. 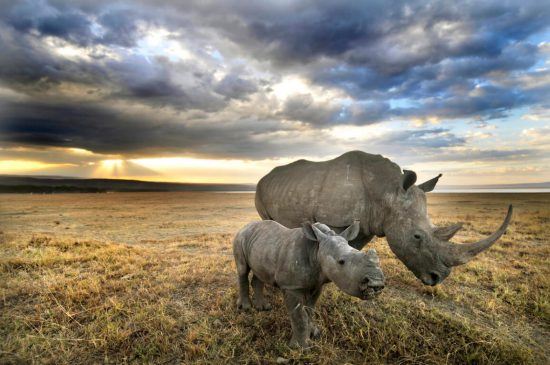 Whether that’s bucket-list African holidays, helping a child reach his/her true potential or protecting wildlife, Rhino Africa is all about making dreams come true. We’re committed to uplifting this continent through travel, because travel has the potential to change the world – and now more than ever, our planet needs the kind of travel that gives back.

So contact one of our Rhino Africa Travel Experts today, and let’s start making your African dream holiday a reality!

David makes things happen! With a canny inability to sit still for a minute, it’s a miracle he actually sat down long enough to finish his degree in economics. David is a brave and pioneering entrepreneur with a true passion for Africa - especially Africa's wildlife. With his African Grey parrot by his side, there is more than a hint of the Dolittles about our intrepid leader. Before founding Rhino Africa David spent a number of years earning his stripes and cutting his teeth in the industry. David’s interests include photography and travel, and having travelled extensively through Africa most of the images on the Rhino Africa website hail from his well organised image library!