October has brought the start of the rains to Silvan Safari which always brings a sense of excitement and energy after the dry winter months. Even if it is raining we always head out, if the guests want to of course. So after a fabulous high tea we headed out for an afternoon drive as a light drizzle just started to fall on the bushveld.

We decided to go and have a look at a nearby pan where we often have buffalo and elephant come down for an afternoon drink and wallow. As we pulled up and switched off the engine, the sun broke through, the rain stopped and over the back mound trotted a pack of wild dogs, with pups. Just incredible! 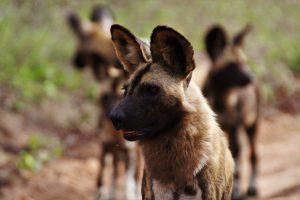 As the social animals they are, they were interacting and playing and having a great time around the water. As the last two members of the pack arrived we could see that their faces were full of fresh blood and had clearly made a kill somewhere nearby.

All of a sudden, before we could even blink, they were off! We barely had time to switch the vehicle on before we started losing sight of them as the pack started to follow the dogs with blood on their faces. It is always amazing to see how quickly things can change with these apex predators, in terms of their behaviour, when there is a potential meal on the menu. 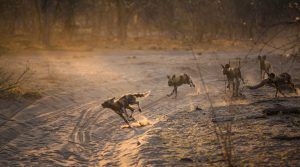 Wild dogs taking off into the bush

Their speed and agility were too much for us and we lost them completely so had to rely on their sounds and smells to try and locate them. We were lucky enough to catch up with them after doing a big loop into an open area close to camp we found them.

Even as quick as wild dogs are, there is an animal with an uncanny ability to turn up exactly where they need to be. In the short time the two dogs had regrouped with the rest of the pack, the hyenas had moved in and taken over the kill. The wild dogs probably realised this was a lost kill, and also with the pup’s best interests at heart, they moved off, leaving the hyenas with their impala prize. 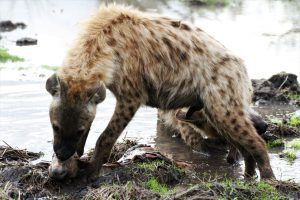 We must have spent close on an hour watching the hyenas devour what was left of the impala. Due to the rain, the bush was covered in small puddles which the hyenas were using to help soften the leftover carrion by dragging the tougher, harder parts of the carcass into puddles which allowed the meat to soften and separate from the bone. 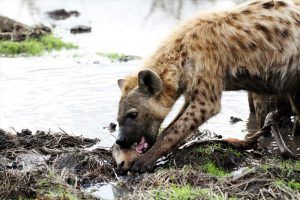 Hyena using the water to get the last pieces off the bone, Photo Credit: Steph Hornsey

It is always exciting seeing the wild dogs and a real highlight for our guests, however it seems the thieves of the bush stole the show, as well as dinner, this time around.

Steph is a big part of our Silvan family. As one of our head rangers, Steph is naturally always ready for an adventure and loves to entertain and make people smile. After spending her childhood in and out of the Kruger National Park, she has developed a never ending love affair for the bush. Steph is also a very keen photographer and is always out and about looking for something weird or wonderful to photograph - and the African wilderness never disappoints in this regard.