Luxury safaris in Botswana offer a combination of the most remote landscapes paired with all the bells and whistles you could desire. And we're talking about the entire safari experience here. It's not just the private plunge pools and almond-crusted venison with basil and cherry foam. With an incredible diversity of pristine habitats supporting huge populations of Africa's wildlife, you could strip away the entire luxury experience and still have the safari of a lifetime. But why forgo the comfort? We like to travel in style! So, when you're planning your luxury safari in Botswana, look no further than these top destinations to add to your itinerary. 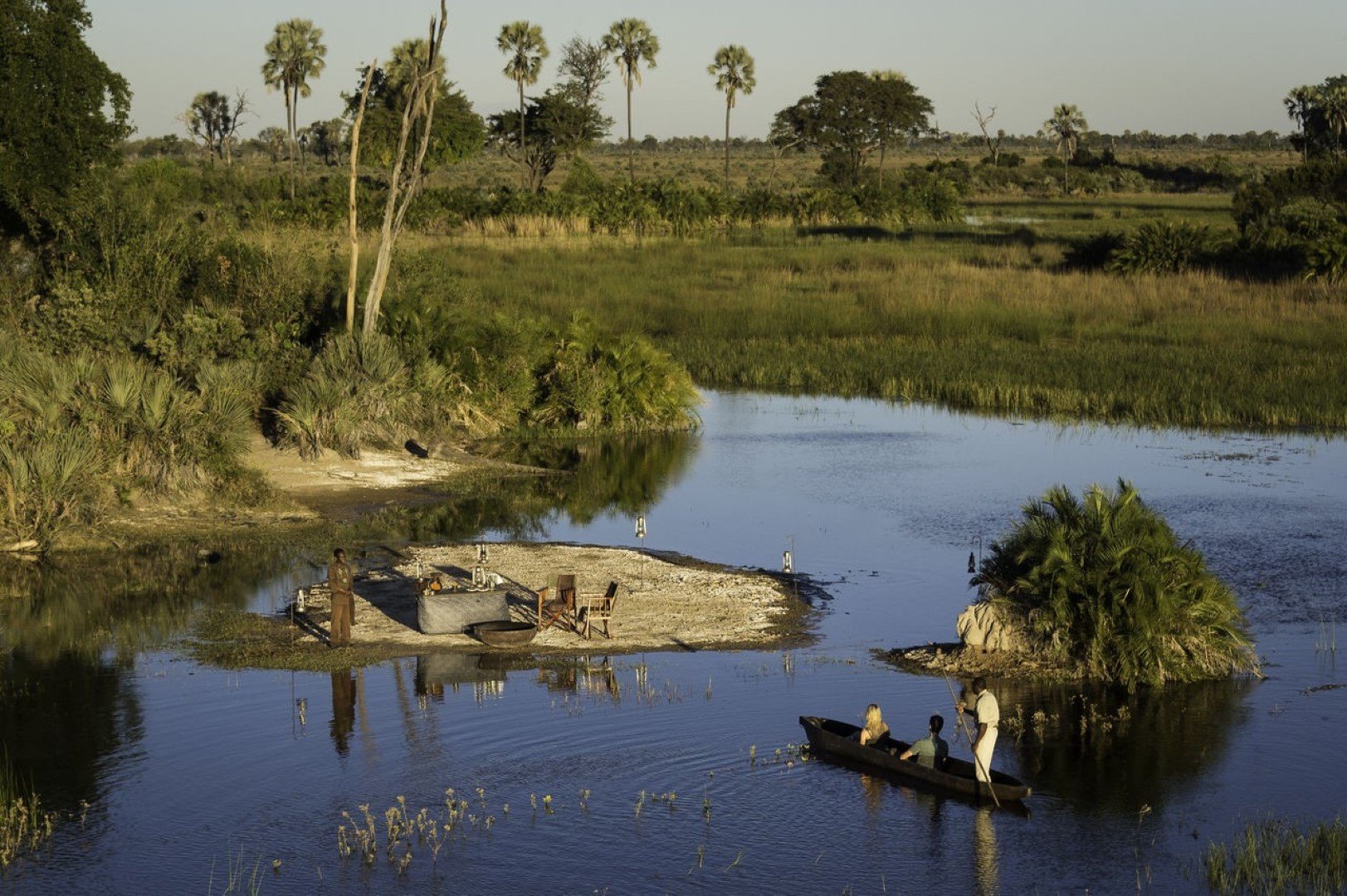 From cruising up the Chobe River surrounded by thousands of elephants to gliding over the world’s largest inland delta in a hot air balloon, these luxury safaris in Botswana will tick all the boxes.

The undisputed jewel in Botswana's heavily jewel-encrusted safari crown, the Okavango Delta is a wildlife experience like no other. Thousands of lagoons, channels, streams, pools and the Okavango River course through a vast savannah and mopane wilderness, supporting all of Africa's big game (and small). Plus, the birdlife is prolific with over 500 species.

The largest inland delta in the world and a UNESCO World Heritage Site, the Okavango Delta is without a doubt one of the top destinations for luxury safaris in Botswana. 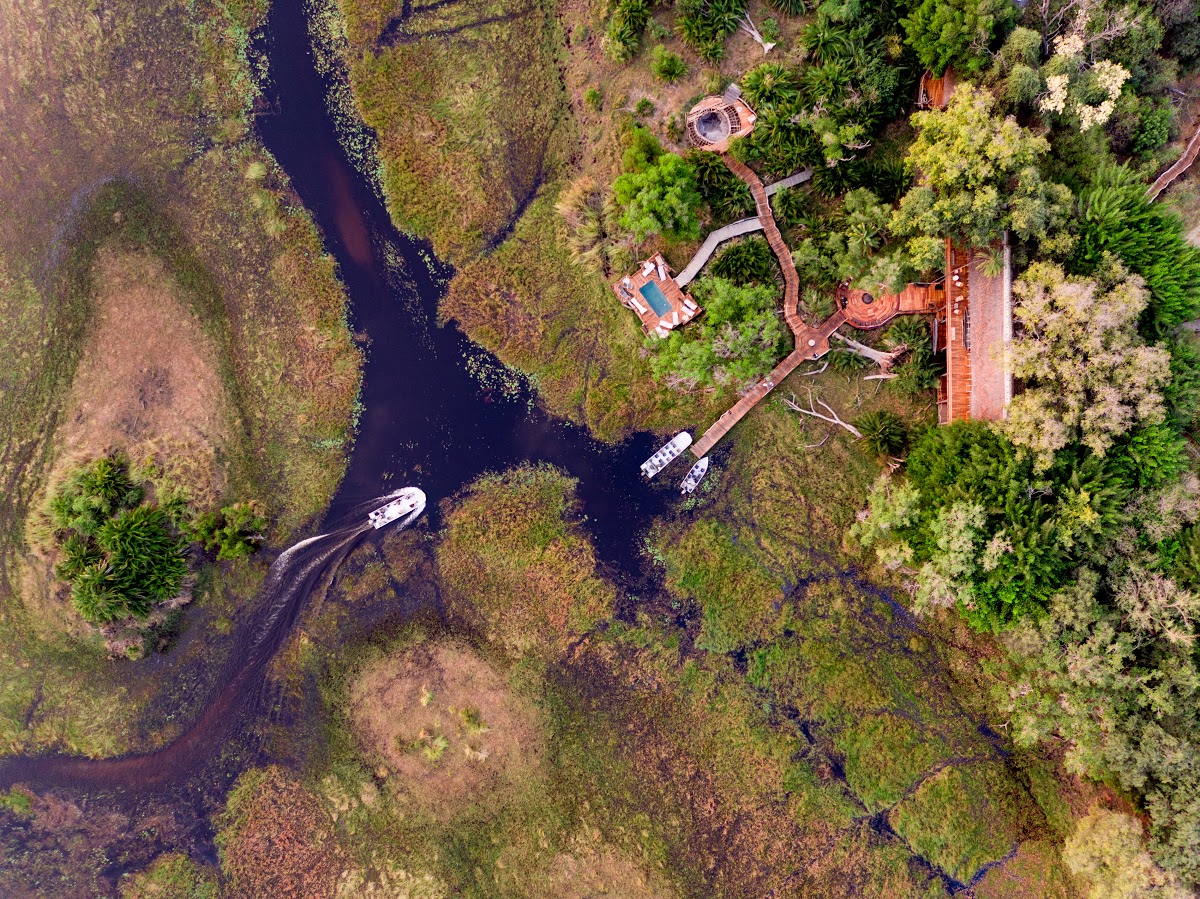 Luxury safaris in Botswana in the Okavango Delta are unforgettable

Inside the greater Okavango Delta conservation area, the Moremi Game Reserve represents a nucleus of exclusive luxury safaris in Botswana. And within Moremi, the luxury safari lodges in private concessions offers you one of the most exclusive safari experiences on the African continent. In other words, you can't get more private or remote than this!

As with the private concessions around the Delta, your safari activities focus on the waterways and floodplains, rising and falling with the seasons. 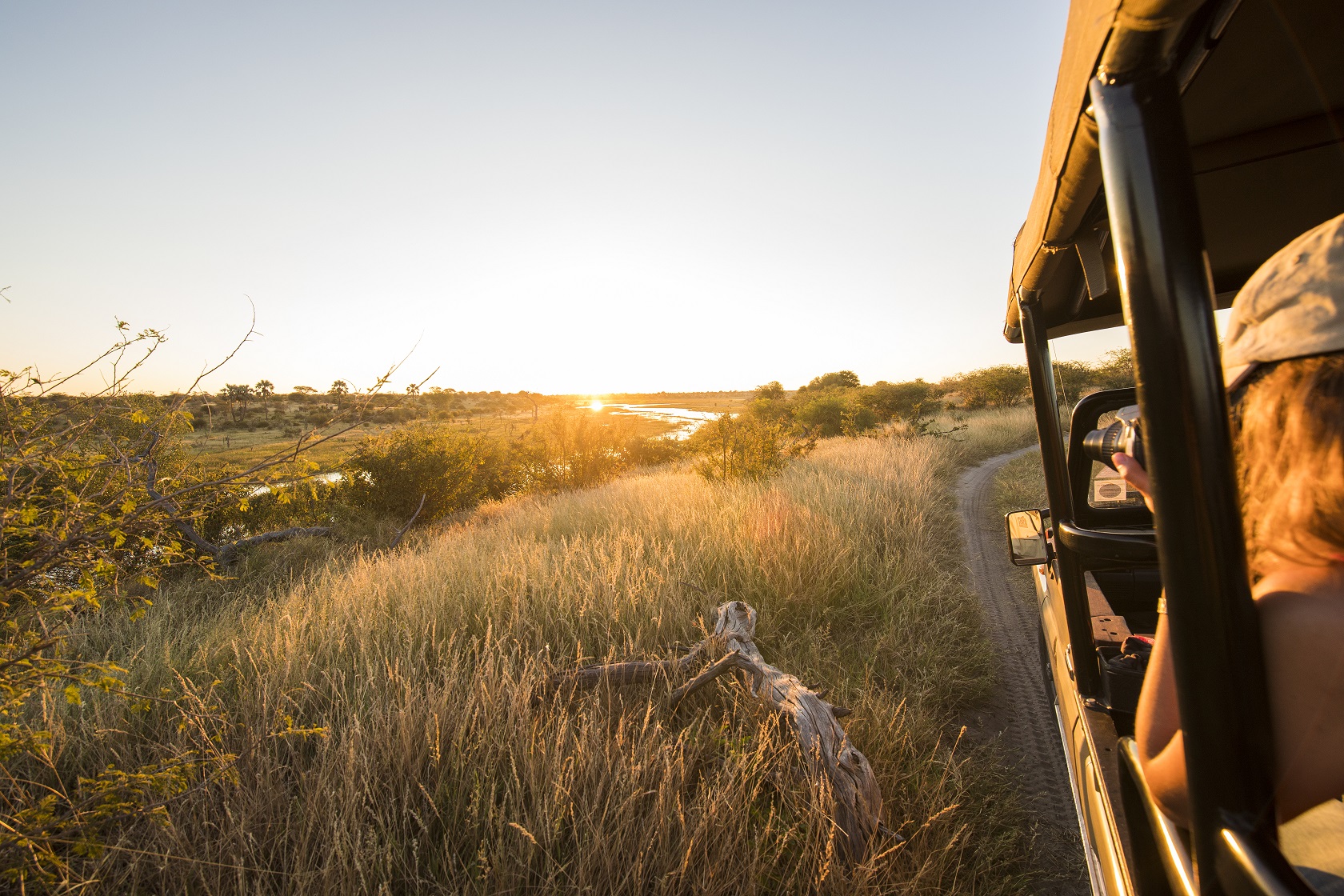 Game drives in Moremi are magical

Chobe National Park is where you go to see elephants! And most of Africa's wildlife and birdlife to boot. The Chobe River marks the northern boundary of both national park and country. Therefore, the best way to experience Chobe is upon this gigantic and seriously scenic river.

Spend a few nights aboard a luxury houseboat to escape the crowds and have the glorious river to yourself and a selected few. If you'd prefer a land-and-water safari combination, Chobe has many lodges that offer the best of both that ranks among the finest luxury safaris in Botswana. 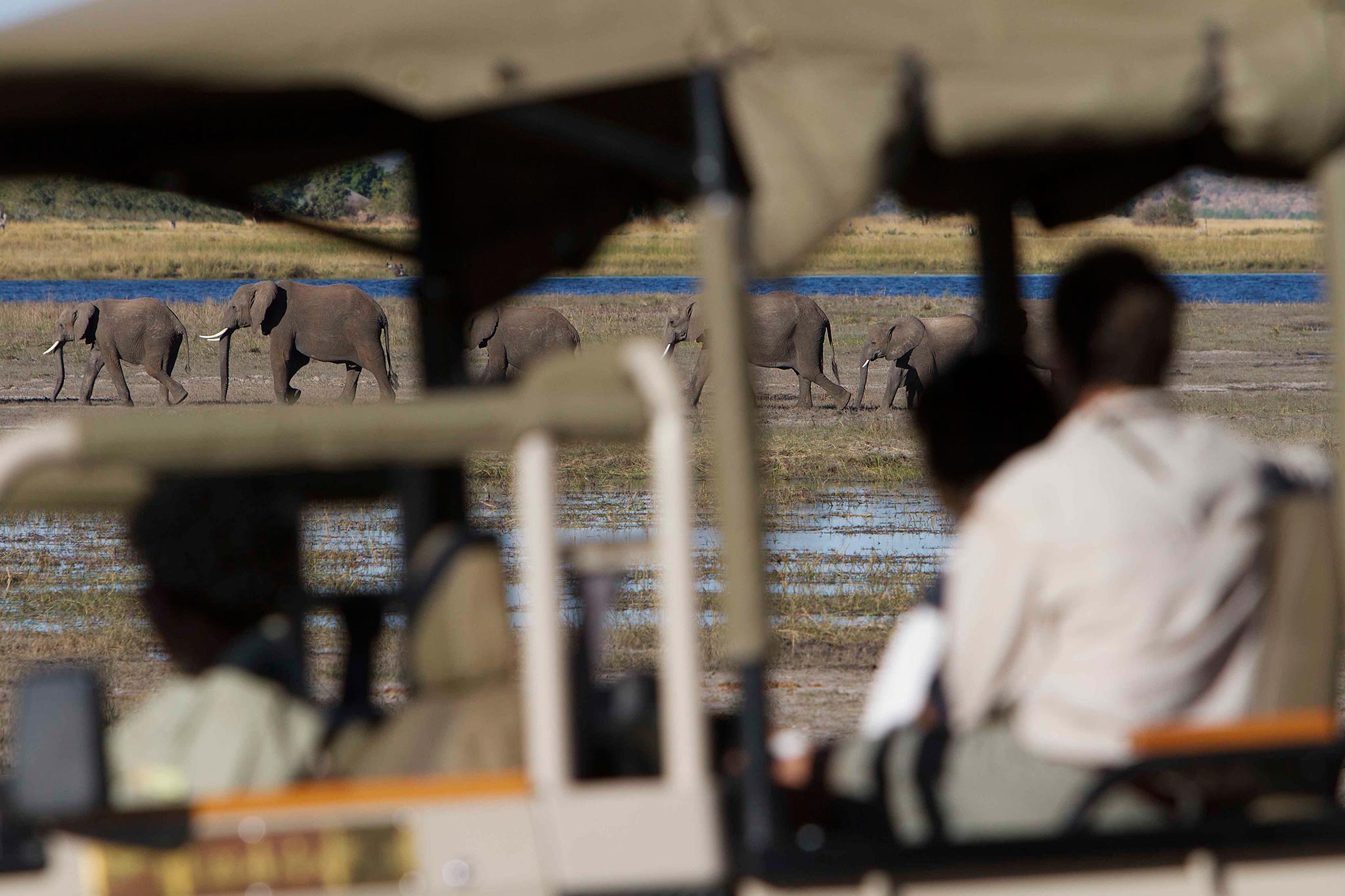 Chobe is known as the land of the gentle giants

Between the Okavango Delta's Moremi Game Reserve and Chobe National Park, Khwai is a huge private concession with a steady stream of wildlife traffic traversing between the two areas. The Khwai River is a permanent water source. Therefore, it attracts huge herds of elephants, buffalo and the full range of African wildlife to its grassy floodplains.

Lions, leopards, African wild dogs, cheetahs and hyenas are often seen here. And, being a private reserve, your game drives and walking safaris take you right up to the action. The riparian forests also provide a haven for hundreds of bird species. 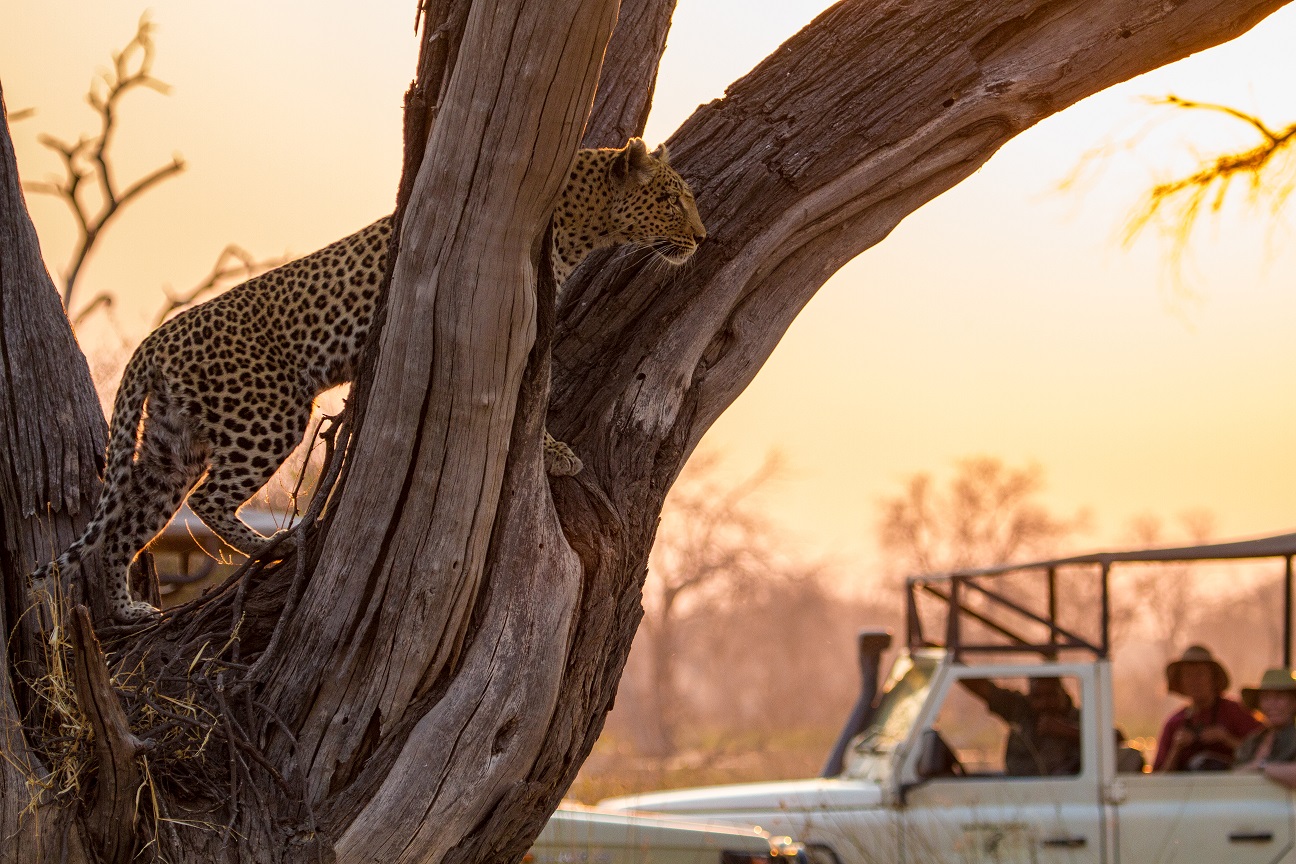 Luxury safaris in Botswana means you can go off-road and get close to wildlife, Image Credit; Machaba Camp

The Linyanti River and its floodplains occupy a vast private concession in the far northern reaches of Botswana. The Linyanti is an exceptional game viewing destination, only accessible by light aircraft and comprising habitats borrowed from the Okavango Delta to the west and Chobe to the east. Being a permanent water source, the marshes and rivers of the Linyanti are the dry winter refuge for much of the legendary Chobe elephant and buffalo population.

The open grasslands of this enormous floodplain are the final destination of the annual zebra migration, second only in numbers to the Great Migration in East Africa. Furthermore, the Linyanti's varied habitats support and rightly earn this wild area's reputation for incredible predator numbers. Giraffe, hippo, wildebeest, waterbuck and numerous rare antelope add to the fantastic safari experience, as does the birdlife. 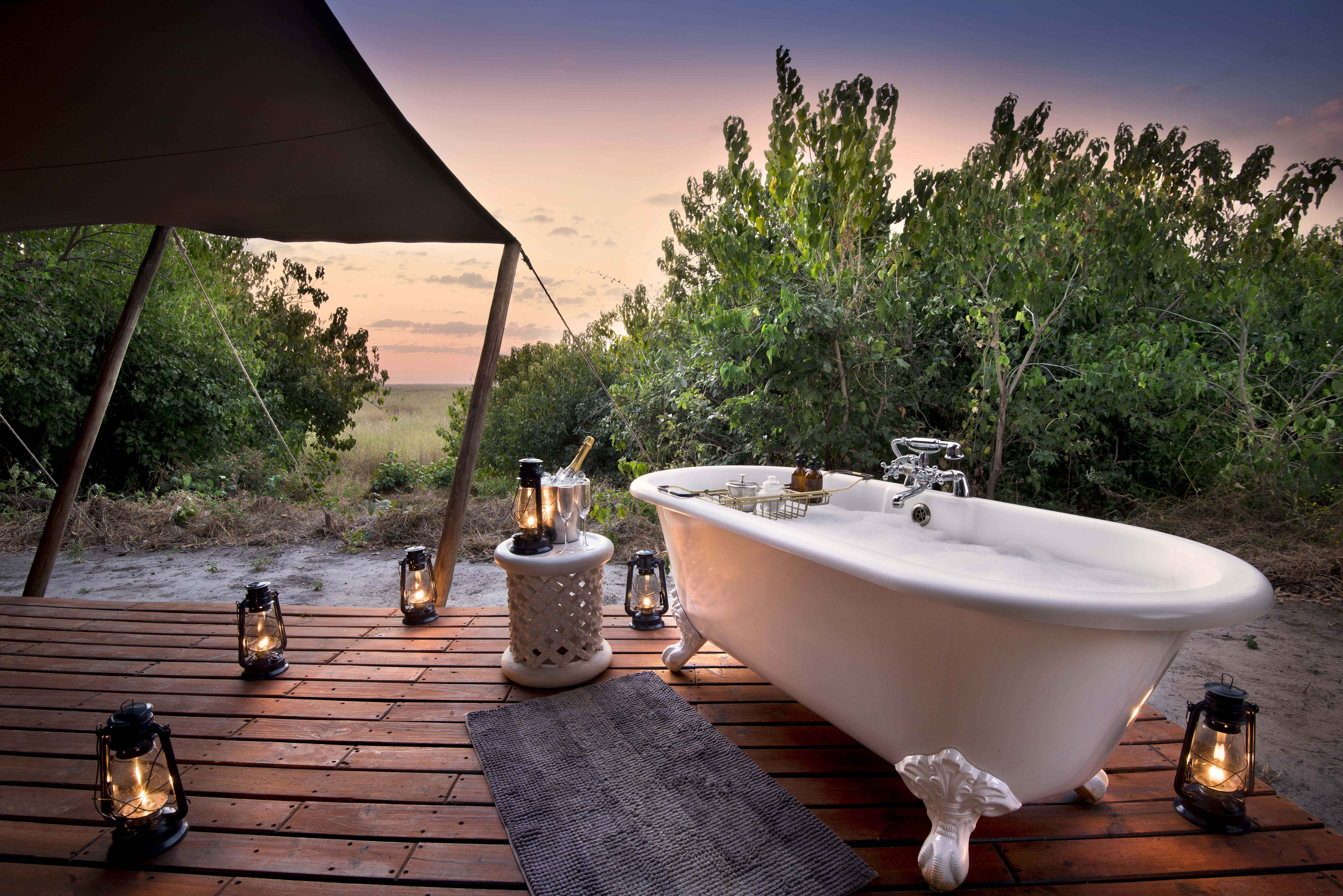 Tuli is a vast swathe of picturesque wilderness in southeast Botswana that's quite different from the rest of the country in many respects. Comprising multiple private reserves, the experience at Tuli is always exclusive, the game viewing is exceptional, and the landscape varies between woodland, open grassland, rocky outcrops and riverine cliff faces.

Wildlife viewing is spectacular, and the incredibly scenic backdrops make for exceptional photographic safaris. With the Limpopo, Shashe and Motloutse Rivers forming its borders and several smaller rivers running through this seemingly parched land, Tuli Block supports excellent populations of all Botswana’s big game. And with leopard being the big drawcard. 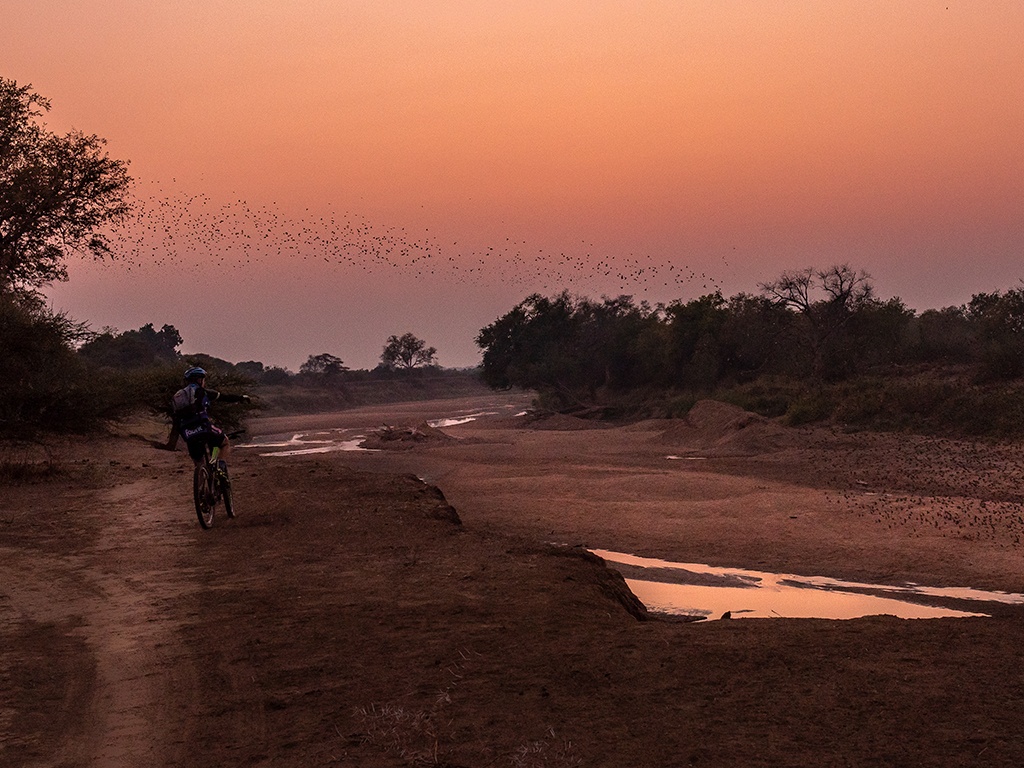 Get lost in the wild on a cycle safari, Image Credit: Tour de Tuli

Predators feature on everyone’s must-see list of wildlife. And for good reason. Nothing can prepare you for the spine-tingling thrill of seeing the fearsome power of a big cat up close and in the wild. With its great plains supporting a wide variety of antelope and plains game, Selinda Game Reserve is possibly the best place to see predators in Botswana. Therefore, it makes this remote, exclusive and visually spectacular game reserve one of our favourite destinations to visit for luxury safaris in Botswana.

Wild dog sightings are reliable, as are lion, spotted hyena and cheetahs enjoying the wide expanses of floodplains and convenient anthill lookout posts. Zebra and wildebeest migrate here, and you’ve always got huge herds of elephant and buffalo to rely on in case the African wild dogs are proving elusive. 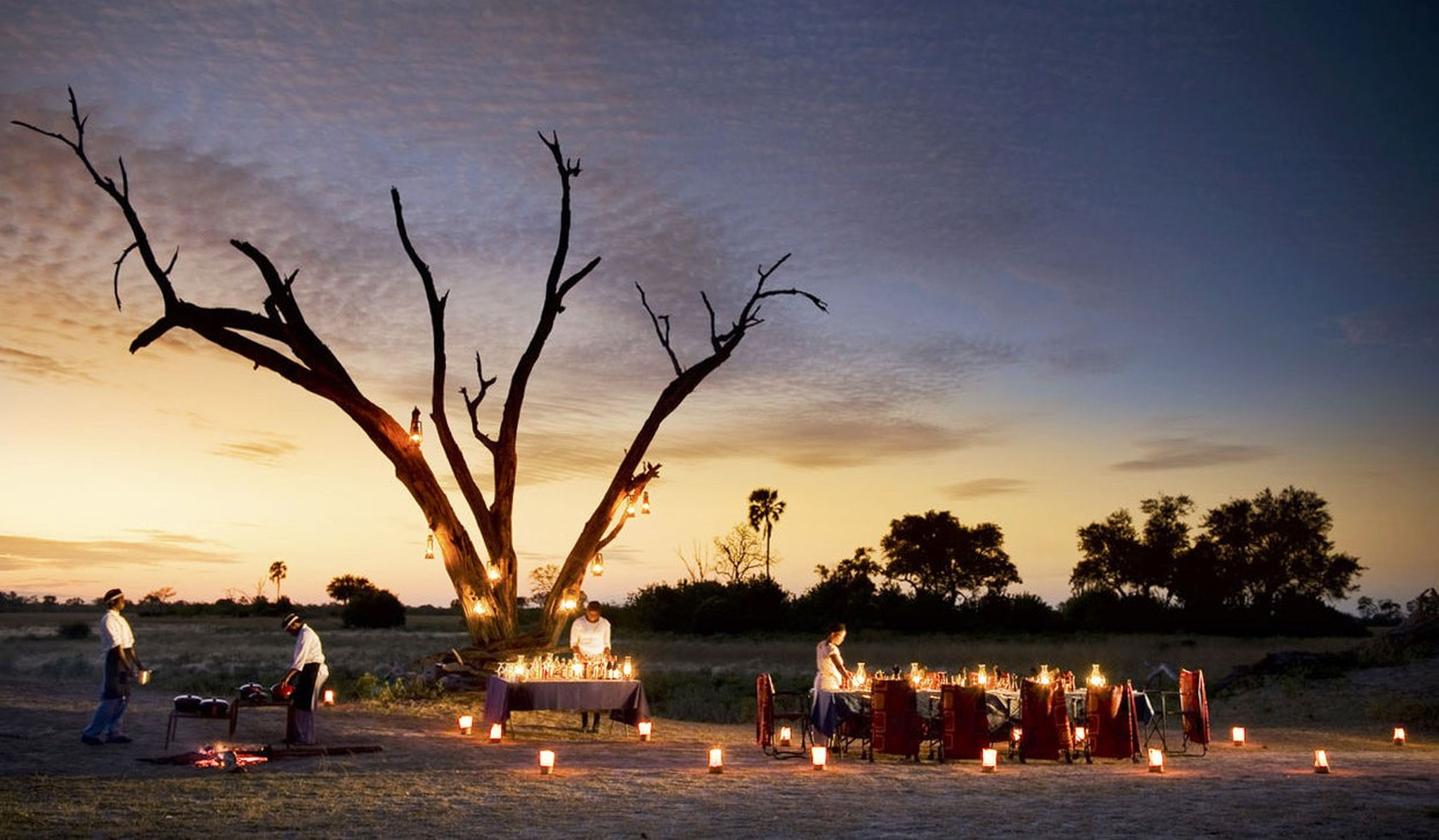 Luxury safaris in Botswana include dining out under the stars, Image Credit: Selinda Camp

The Savuti (also spelled "Savute") area of Chobe National Park is an exciting safari experience with a prodigious lion population in a large, dry expanse of scrubby grassland. Water is scarce, and the lions take full advantage of the enigmatic Savuti River to ambush their prey. However, not without competition as hyenas have staked their claim to the migratory plains game, including the zebra and wildebeest migration that loops back here every year.

And if that’s not enough, elephants are rather fond of the sweet acacia trees that differentiate this region from the less palatable mopane woodland in the northern section of Chobe. They also have their clashes with the famous lions of Savuti. The incredible predator action and wildlife interactions make Savuti one of the best areas for luxury safaris in Botswana. 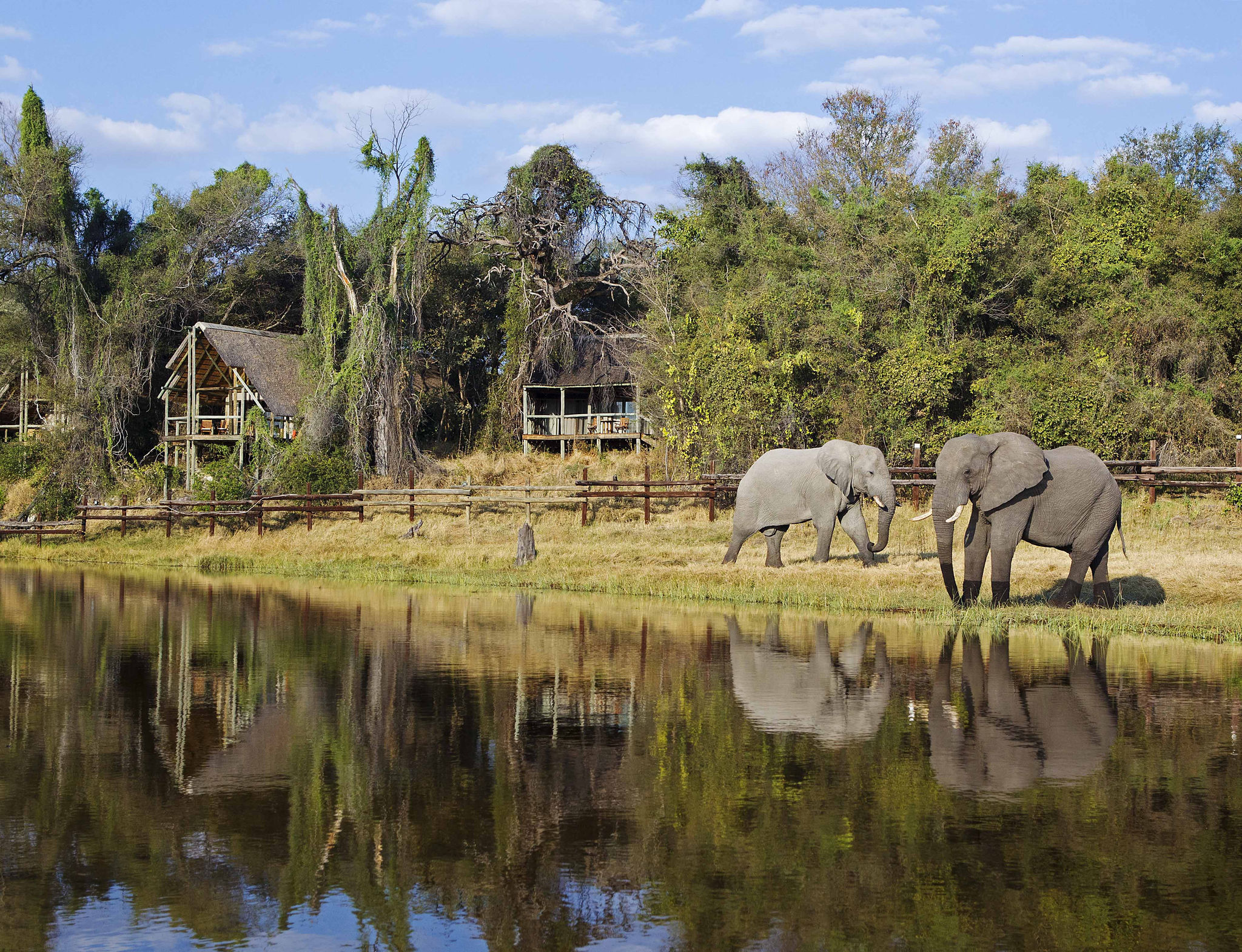 Mashatu is a private game reserve in Botswana's beautiful and remote Tuli Block. It benefits from the Tuli's varied scenery of rocky outcrops, riverine forests and cliffs, and vast open grasslands dotted with baobab and acacia trees. With just a handful of luxury safari lodges on 32,000 hectares, you have a really large chunk of African wilderness all to yourself. Mashatu is wild and remote and therefore one of Botswana's most underrated safari experiences.

Fair enough, it does have competition (looking at you, Okavango Delta, Savuti, Linyanti and Chobe!). But it promises diverse habitats and regular sightings of elephants, leopards, lions, cheetahs, hyenas and even African wild dogs. Mashatu is a strong contender for one of our favourite luxury safaris in Botswana title. Add to this incredible beauty, wildlife abundance the photography hides, mountain biking and horseback safaris, and you've truly got yourself a complete and exhilarating safari experience. 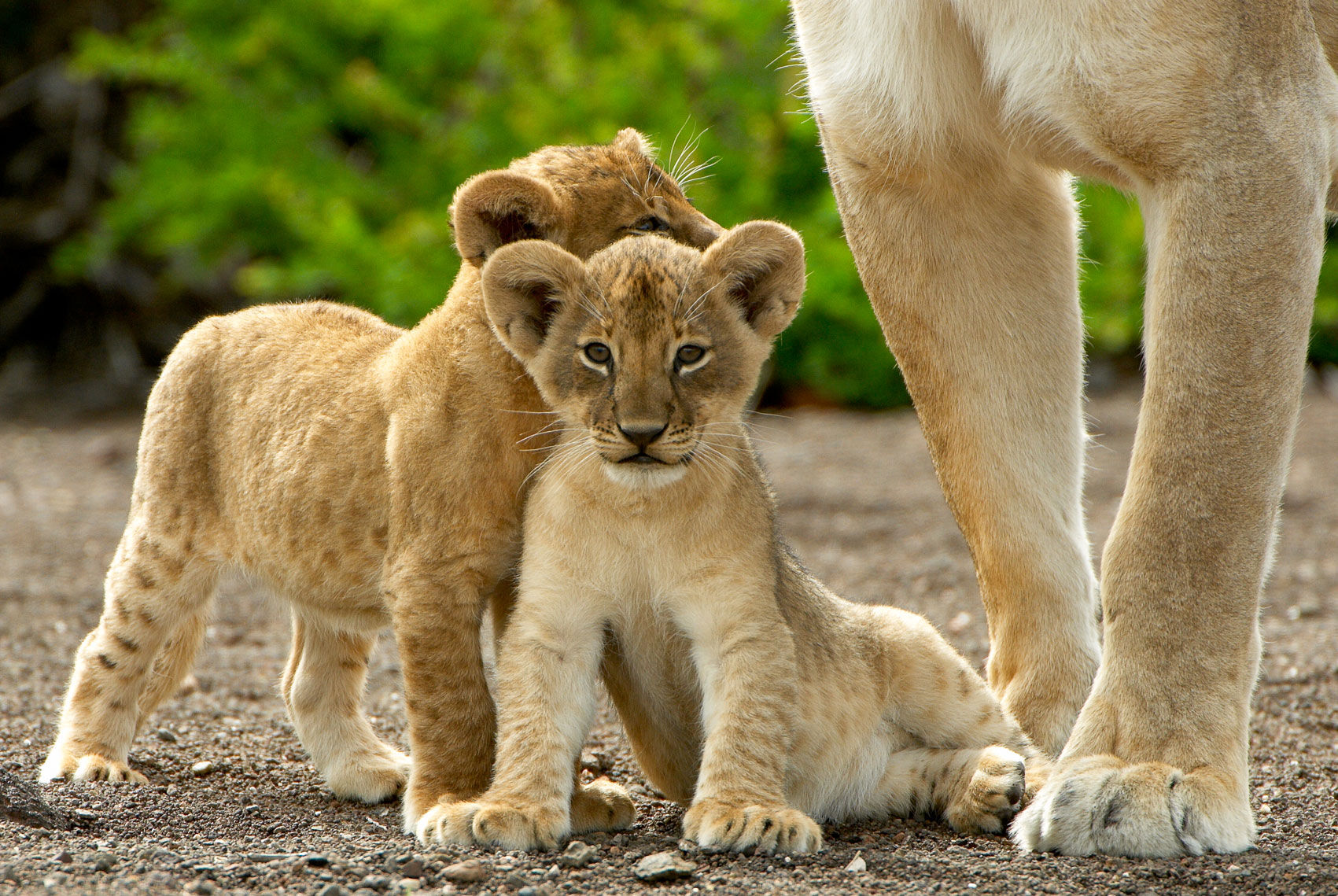 And now for something completely different. From the wildlife-crammed waterways and grasslands of northern Botswana, the endless, shimmering monochrome of the Makgadikgadi – the world's largest salt pans – may come as a bit of a surprise. A stark, beautiful, soulful surprise. With a multitude of surprises to follow. Kalahari grasslands form a patchwork linking the salt pans and the Boteti River. This river is the only permanent water source in the area and therefore supports a healthy population of plains game and space-favouring predators.

The annual rains attract considerable wildlife attention, including the zebra and wildebeest migration, predators, elephants and antelopes and flamingos and pelicans in overwhelming numbers. While the wildlife experience is often exceptional in the Makgadikgadi Pans. It's the ancient, eerie effect of seeing the Earth's curvature beneath an unbroken blue sky and the desolate silence that leaves its most enduring mark. 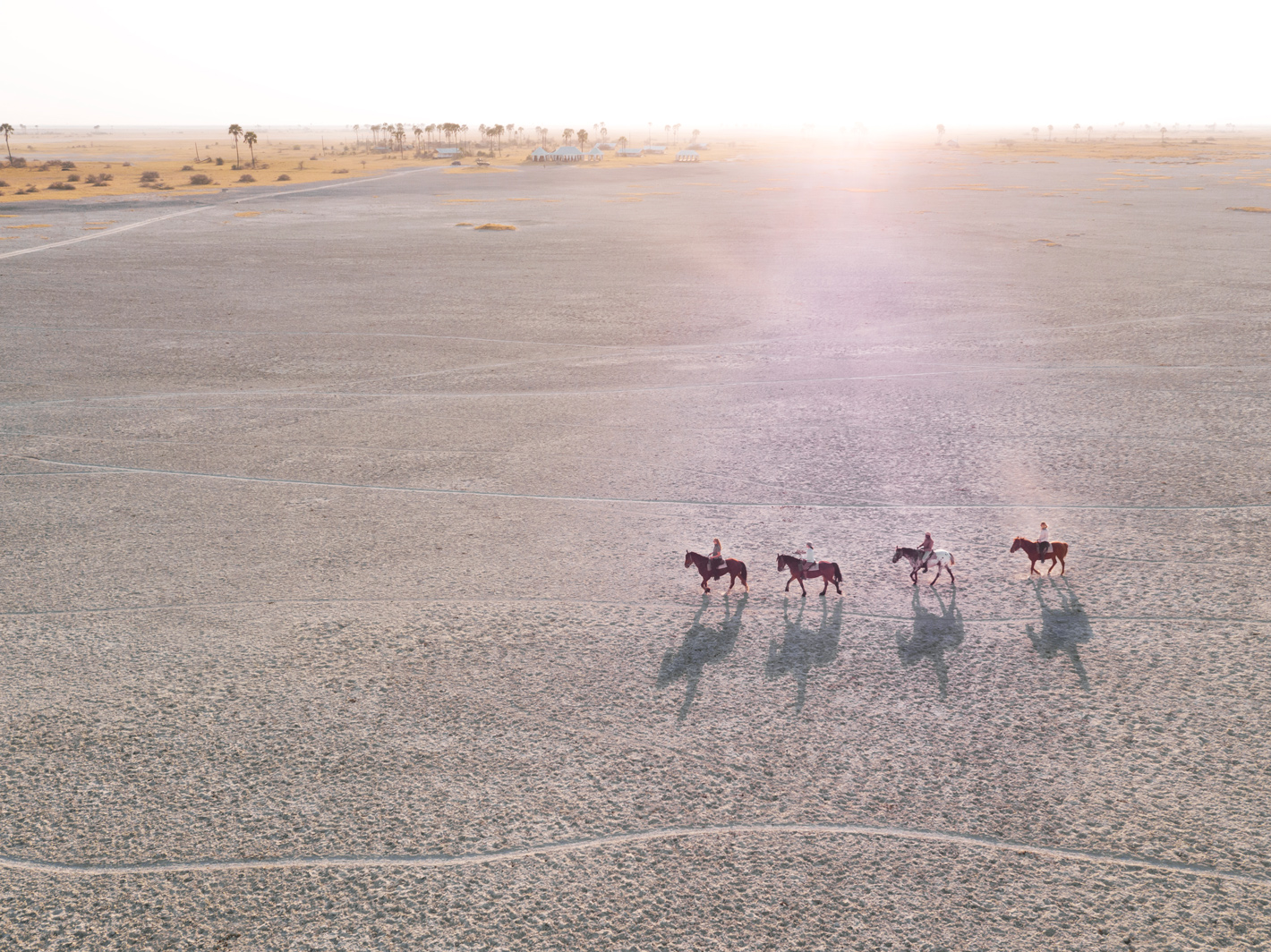 Book with Rhino Africa for the Best Luxury Safaris in Botswana

Botswana, on the surface, looks like a large flat basin of sandy grasslands bordered by a few large rivers. Dig just a little as we have done here, and you'll find such a diversity of habitats supporting such a staggering variety and density of wildlife that you'll be hard-pressed to find a better safari destination in Africa. Throw in the utmost in sustainable luxury safari lodges, and these are the ten best luxury safari destinations.

So, our best advice for luxury safaris in Botswana is to talk to one of our Travel Experts for a tailor-made Botswana safari that features the diversity and excitement we can only hint at in words. 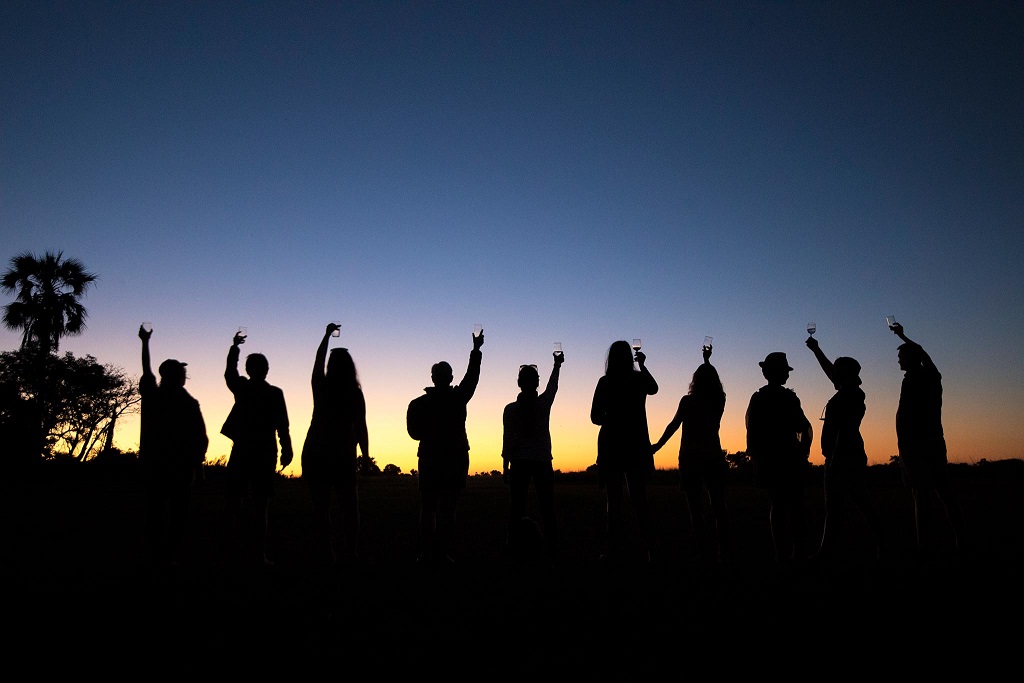 Botswana vs Kruger: Which Destination Offers the Best Safari?

Botswana vs Kruger: Which Destination Offers the Best Safari?

When Is The Best Time to Visit Botswana?

When Is The Best Time to Visit Botswana?

Born in Zimbabwe and, having bluffed his way through a Journalism Degree at Rhodes, Ian turned his reluctantly nomadic life into a successful career as a travel writer. With stints in Harare, Joburg, Cape Town, Swakopmund, Port Shepstone and Greyton, he has travelled the length and breadth of southern Africa. Now living in Knysna, Ian combines his innate tendency to write for a living with a deep-rooted love of Africa’s wilderness and a keen interest in the hospitality trade.