Mileage & Memories on the Garden Route

While many consider the Garden Route to be a stretch of coastline running from the South African towns of Mossel Bay in the Western Cape to Storms River Mouth in the Eastern Cape, the Garden Route road encompasses so much more than that. Begin in South Africa’s darling city and meander across the Cape, passing biodiverse floral kingdoms, semi-arid desert areas, forests, and tiny coastal hamlets along the way. Let us show you the Garden Route.

The first stop of your Garden Route adventure starts before you even hit the road. Take yourself 1, 085m up into the air and onto the flat top of the Mother City’s most iconic landmark: Table Mountain. From here you can look upon the city, marvel at its surrounding mountain and coastline, and drink in what is arguably one of the most intoxicating viewpoints on the planet. At the same time, you are within the smallest but richest of the world’s floral kingdoms — and this is what puts the garden in Garden Route.

One of the shining stars of the Overberg region and sprawled along the base of the Langeberg Mountains, Swellendam has long been used as a pit stop to and from Cape Town. Swellendam is often considered the start of the real Garden Route. From here, the landscape becomes more mountainous, lusher, and prone to verdant greenery. As your speedometer clocks back the kilometres, you approach what many consider to be the country’s own garden of eden. 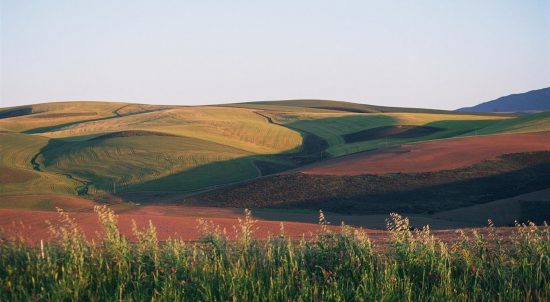 As South Africa’s third-oldest town, Swellendam naturally has a number of sites of historical interest — such as the Drostdy and Mayville Museums, and the Old Gaolyard — dotted along its streets. With its white walls and towering spire, the town’s Dutch Reformed Church is said to be one of the most photographed churches in South Africa. A visit to the Bukkenburg Pottery Studio, Kunstehuijs Fine Art Gallery, and Village Market are delightful ways to pass the time in this artistic hub, while an array of restaurants will satiate any appetite. 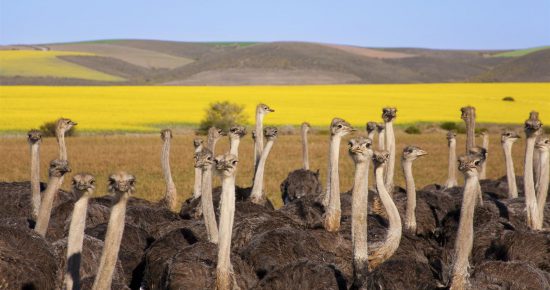 Nestled snugly between the Swartberg and the Outeniqua Mountains at the end of the scenic Route 62 in the Klein Karoo, Oudtshoorn is renowned for being the ostrich capital of the world. But that isn’t all this charismatic town has to offer…

Travellers can explore the caverns of the Cango Caves, Africa’s largest cave system, which lies at the foot of the Swartberg Hills. Guests can take a tour to the nearby Cango Wildlife Ranch to observe its inhabitants before stopping by the Highgate Ostrich Show farm, where they can try their hand at riding an ostrich! Oudtshoorn is also the host of an annual national arts festival and forms a part of the Klein Karoo wine route.

By now the road has wound its way into the lush coastal region and through forests. Wilderness is anything but, considering its lively beach town atmosphere. Stretching for kilometres, the beach in Wilderness is no doubt one of its star attractions. Visitors can play in its warm waters or enjoy a variety of leisurely water sports along the gentle Touws River which leads into the ocean.

The town’s skyline is often scattered with paragliders who have leapt from a hilltop opposite the Map of Africa viewpoint. This viewpoint makes for a magnificent photo opportunity and is a great spot to bid farewell to the day and watch the sun go down. From here and from this angle, the Kaaimans River has carved an outline in the surrounding valley that is eerily reminiscent of the African continent. On clear days, travellers can see up to 6km of coastline stretching towards the neighbouring town of Sedgefield. 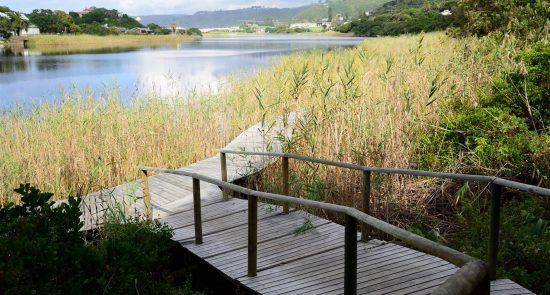 Tired of the N2 road running through the Garden Route? To be fair, it’s hard to be with all that beauty, but just in case, travellers should take the road (literally) less travelled by and venture onto the Phantom Pass which winds just above the town and forms part of the 7 Passes that connect George to Knysna. Be sure to have a camera with you!

After passing through the natural beauty of Wilderness you arrive in Knysna — alive with inviting shops and restaurants and many natural attractions which are the staple of this route. Cruises on the town’s famed lagoon float right up to the imposing formation of the Knysna Heads — a regal natural gateway to the ocean worthy of a fantasy novel. The Knysna Heads are defining features of this town: two imposing headlands appearing to face off with one another, allowing water to pass from to the estuary around which the town is built. 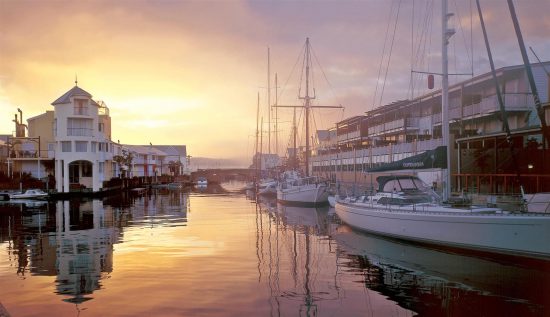 Submerged rocks and changing tides deceived sailors for decades as they tried to make it safely into port, resulting in a variety of shipwrecks littering the estuary floor (which subsequently makes for excellent snorkelling and diving today). Thanks to advanced equipment and plenty of trials-by-error (by past mariners), it’s smooth sailing from here on out and visitors can now safely pass through these magnificent headlands on a catamaran boarded from the Waterfront.

Aside from its warm waters and plethora of beach options, Knysna is also a popular golfing destination with an astonishing three golf courses within its boundaries—impressive for its size! Enjoy long greens dappled in the shade adjacent to the estuary at Knysna Golf Club, magnificent views and the odd baboon on the tee box at Pezula, while Simola’s undulating hills undoubtedly offer the most magnificent views of the town. 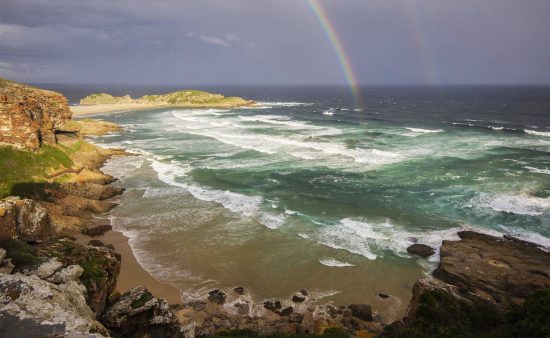 Plettenberg Bay is sprawled across a picturesque stretch of coastline in the Garden Route and flanked by verdant afro-montane forest. Long revered as a top notch beach destination by South Africans at large, word has leaked out and this quaint seaside town now attracts international tourists along with nationals.

Robberg Peninsula stretches out to the right of Plett’s Central Beach and is a protected reserve — its 11km hike is a well-known circular trail in the area. Those who don’t quite feel up to it will be pleased to know there are shorter 2km and 4km options, as well as ablution facilities, barbeque facilities, and a breathtaking beach. 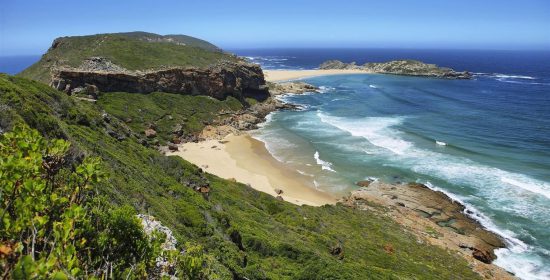 See the peninsula from a different angle with  a marine safari leaving from Central Beach. Travellers can hope to see seals, dolphins, and the odd orca, while migrating humpback and southern right whales call the safe haven of the bay home at certain times of the year. Afterwards, a lounge and lunch on the beach is a great way to end off the day.

Visitors can even soar through forest canopies suspended on a zip line with Tsitsikamma Canopy Tours. This activity is fun for young and old alike and will see visitors zoom past ancient Yellowwoods, some of which experts estimate to be 700 years old! Keen eyes may even spot a Knysna Loerie and other woodland creatures. 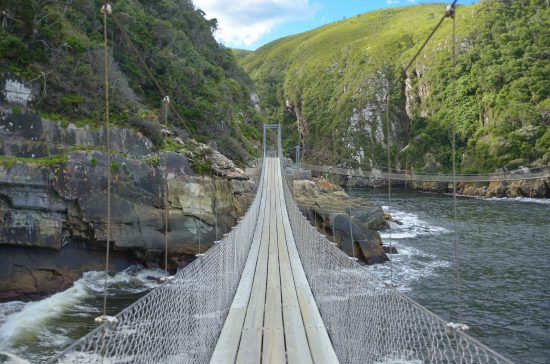 The evocatively named Storms River is a place where adventure and exhilaration meet natural beauty. Emerald forests and winding rivers dip into the salty shores of the Indian Ocean in this region which extends along part of the Garden Route in South Africa’s Western and Eastern Cape, attracting birders, photographic enthusiasts, outdoorsmen, and hikers. Keep your courage in check while braving the highest bungee jump in the world. Bloukrans Bridge extends over the steep ravines which enclose Storms River. This is a must for daredevils and thrill seekers who want to knock this death-defying feat off their bucket list. 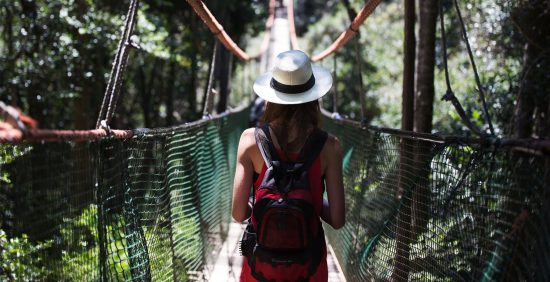 Get acquainted with feathered and furry friends alike at Birds of Eden and its neighbouring Monkeyland in the Crags. Birds of Eden’s 2-hectare expanse is the largest free-flight aviary on the globe while Monkeyland boasts 18 different species of primate from lemurs to langurs. Still not intrigued? Well, to top it all off—Jukani Wildlife Sanctuary is also within walking distance and provides a safe home to a variety of big cats. 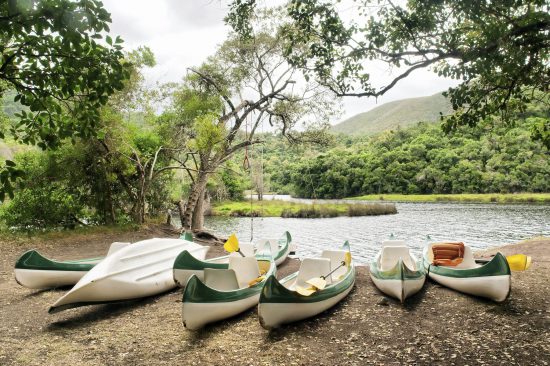 Kayak along the steep ravines and meandering waterways of Storm’s River, before transferring to a lilo for a leisurely float/paddle up the Storms River gorge. From this angle, adventurers can truly be struck by the magnificent scenery surrounding them.

Are you ready to let us take you there? Take a look at some of our tour options for the Garden Route or simply contact us to get started.