What I Learned On Safari With A Wildlife Photographer

About six months ago I decided to buy my first DSLR camera. I looked online for suggestions but it was all quite confusing. So I rose from my chair at work, took a few steps, and tapped Simon on the shoulder.

Simon is Rhino Africa’s resident photographer. He flies off on shoots to lodges and reserves all over Africa to capture the beautiful content we need. It’s a sweet gig. And Simon, I’ll be honest here, doesn’t deserve it. All he deserves is a poke in the eye and a kick to the kerb. You see, Simon is my lunchtime table tennis foe and we’ve developed a scathing rivalry that adds a bit of spice to our work days.

Simon’s trash talk is as weak as his backhand but it doesn’t stop him from practising both daily. Simon grew up in Ireland and has an Irish attitude about things, a strange sense of humour that some people find endearing, but most just find a little weird and disconcerting. He calls it his Irish, “gift of the gab,” but I think of it as more of a curse.

I love that he can’t refute any of this.

Our enjoyable rivalry masks a begrudging friendship and Simon was happy to help me choose a camera and explain the basics to me. “At first, keep things simple. Always shoot in AV mode. Use the smallest F-stop you can. Leave it on ISO 400 and shoot in RAW format. Anyone worth their salt only shoots in RAW. You’re then able to edit them and make them pop. Now bugger off.”

I went out and took some photos that a few of our colleagues said weren’t half bad. I wasn’t going to allow that to pass and let Simon know his days were numbered. I told him one afternoon in the middle of a table tennis game, “Simon, you’re dispensable now, I’d relook at becoming an electrician if I was you. Pretty soon you won’t be needed round here.” And then I popped off a searing ace down the line and laughed gleefully.
“Ha! Your jokes are as bad as your photography,” he stammered, and then added for good measure, “And your blogs are shit.”

As the months went by I took more photos and started to enjoy photography even more. Along the way, Simon refused to edit them. “Smart boy,” I told him patronisingly, “I wouldn’t want to dig my own grave either.” And then in a whisper, I’d threaten him, “I’m coming for you Simon, you’re done.”

Then we found out we were going to Botswana on a 5-day trip together. This would be my chance to outshine him. I had little idea how wrong I was and how little I knew.

Our first game drive is at the unique Leroo La Tau lodge on the border of the Makgadikgadi Pans. While Simon moves swiftly like the pro he is, I fumble with my camera settings not knowing what or even how to shoot. I’m not used to the pressure of photographing moving targets, my normal subjects are mountains and trees, not unpredictable African beasts. I am panicking and not even able to remember the basics. Simon has explained the three important settings to me many times before – the F-Stop, shutter speed and ISO – but my mind is misfiring.

“That photo is overexposed, change the shutter speed,” Simon says. The shutter speed? I used to know that but in the heat of the moment, my mind draws a complete blank. I am too embarrassed to ask, so I guess what I should do.
“No Matt! That’s not the shutter speed you fool. Here.” Simon changes the setting and hands the camera back to me. I take some photos, focusing on the right composition and then watch Simon get to work.

He talks to the animals like they’re his friends while he shoots them, “Beautiful, to the left, come back… nice.” He also mimics their movements and sounds; the zebra grunt, the impala jump and the movements of an elephant’s head. I watch him and think he’s gone mad, but then I look at his photos and change my mind.

Lesson No. 2: Forget about everything else and focus on the shot 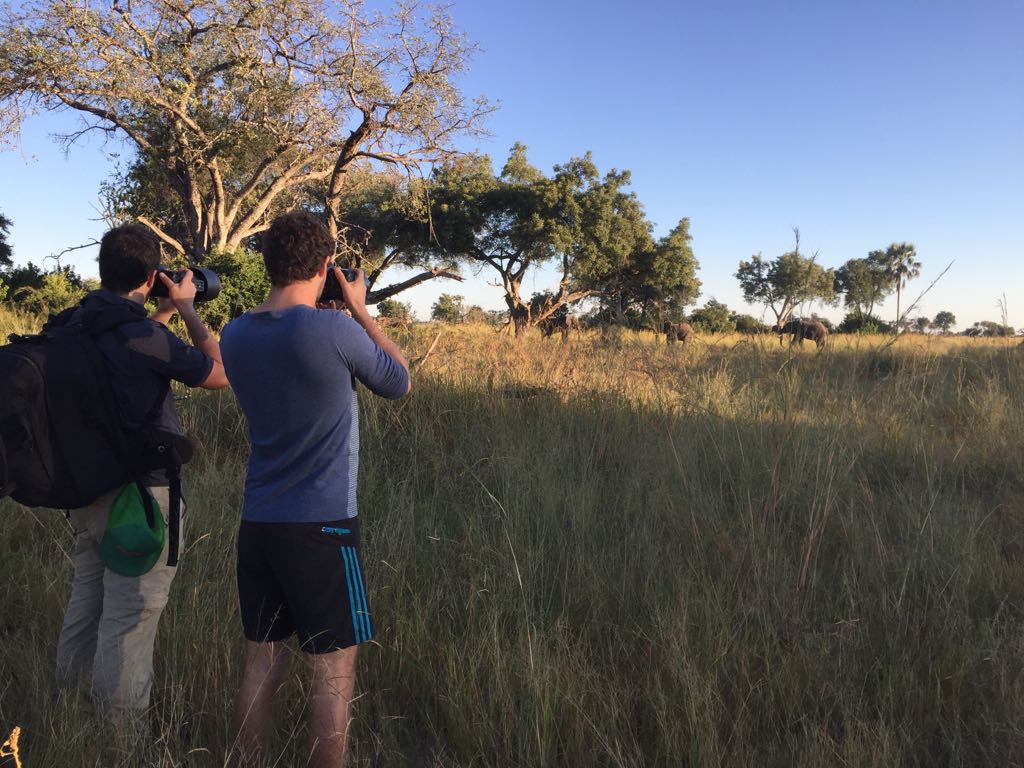 The second game drive is in the famous Moremi Game Reserve in the Okavango Delta. I’ve realised that speed and accuracy is vital in wildlife photography. I’m getting better with the handling of the cameras but nothing like Simon. He moves quickly with sniper-like precision. He has the same clinical approach that Mark Wahlberg has in all those sniper movies. I tell Simon about the sniper comparison, “Except you don’t shoot to kill.”
“Yeah, but my shots are killer,” he says with eyebrows raised,”I’m a lethal weapon baby.”
“Settle down.”

Simon gives me the biggest lens, ‘Barry the bazooka,’ to me. I see a far-off bird and try to take aim but the lens is long and heavy, and it wobbles like a branch in the wind. It takes a while for me to get used to it and steady the lens. I tell Simon of my trouble. “It is not about the lens, it’s about what is behind the lens that matters.”
“Ok, then swap with me.”
“No.” 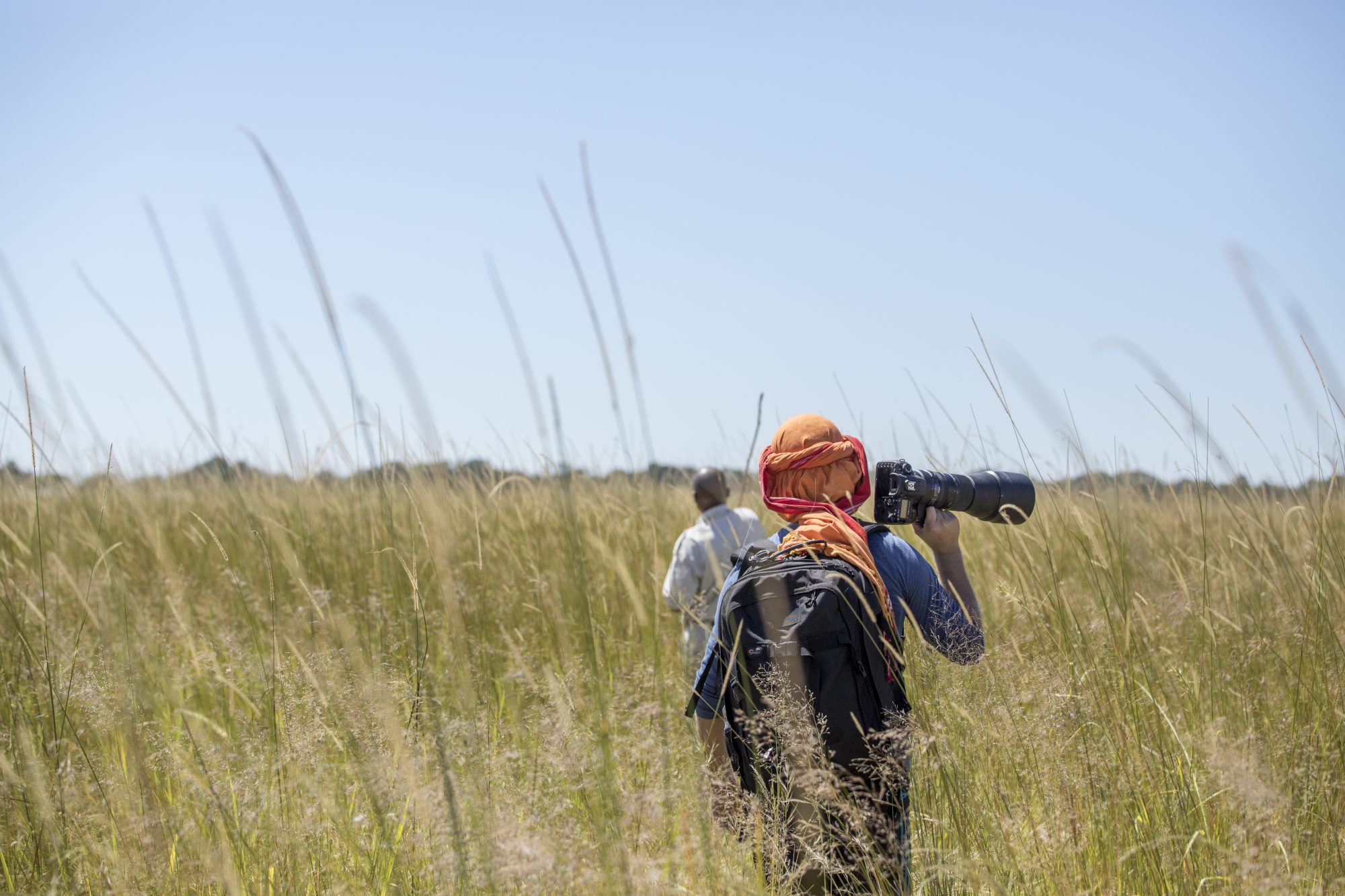 Things I hear Simon say…
“Matt, take a photo, you fool.”
“If I had a nickel for every time you did something stupid I could buy this lodge.”
He is six years my junior but loves to lecture me on all things in life. “Look Matt, if there’s one thing you have to do in life it’s to always go with your gut.”

“Matt, my student, what’s the most important thing in photography?”
“A good camera?”
“No! Wow, you know nothing. The answer is focus and exposure.”
“That’s two things.”
“No, it’s not.”

Lesson No. 3: Focus and exposure are the most important things in photography

Lesson No. 3: Composition is the most important thing in photography

Occasionally, I’d take a photo I liked and would show Simon. “I can’t use that,” he’d invariably say. “It’s shit.”But then on our third evening, we go on a mokoro ride at Camp Okavango. It is sunset, a photographer’s favourite time of day. “Anything we shoot now will be amazing,” Simon says.

Lesson No. 4: Shoot at Sunset

I decide to have some fun and not worry about the right setting or the right lens or what Simon will criticise about me next. I get low and shoot across the water as we’re guided silently along in the famous Botswanan canoes. I take photos of the lily pads and birds and reeds and water.

When the mokoro ride finishes we’re greeted with a song and dance by the staff and I jump in there trying new angles and just hoping to get as many good photos as I can. Once the songs are over and the light has disappeared Simon says one of the few nice things he’s ever said about anyone ever.
“You were in the zone there Matt. Nice.” 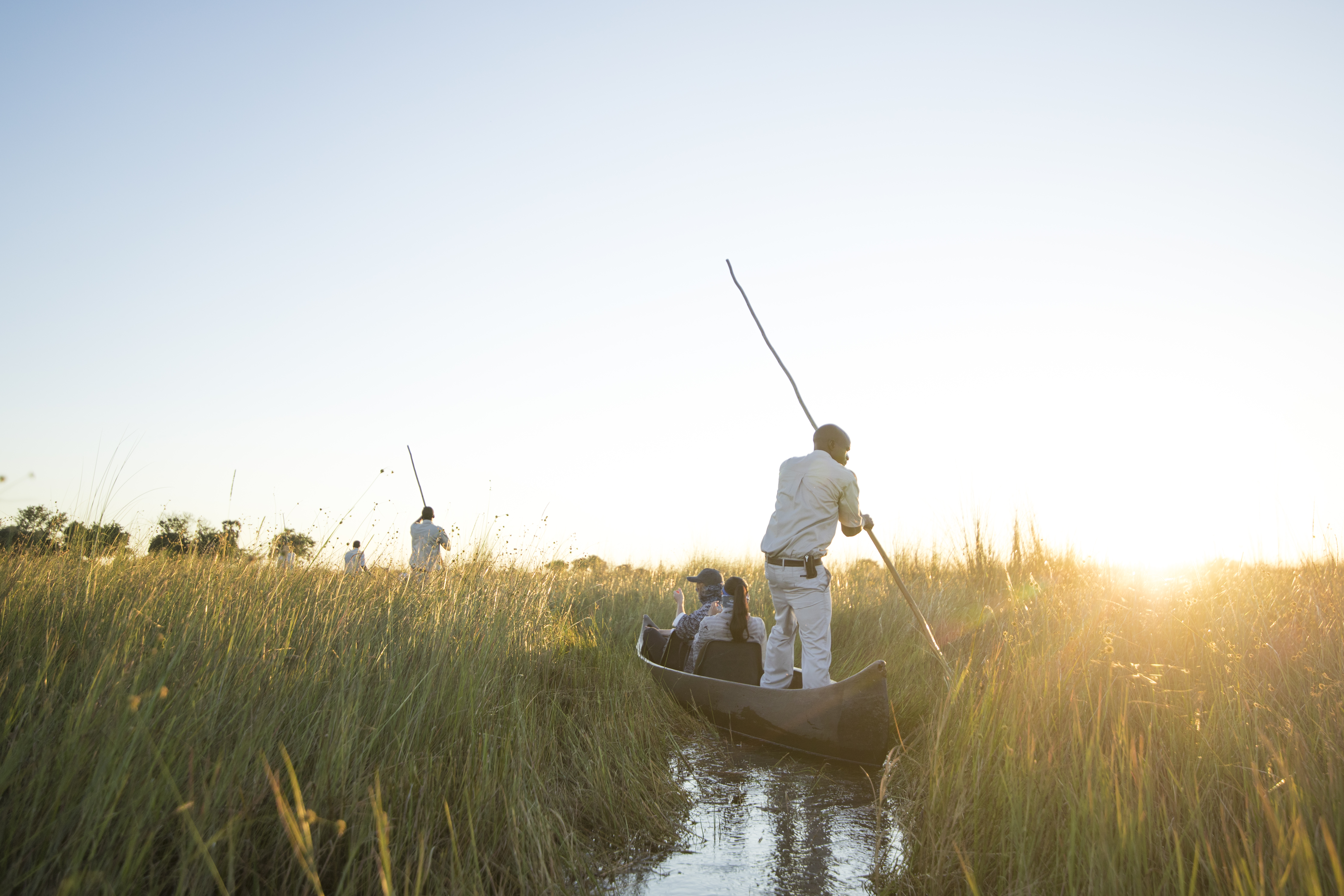 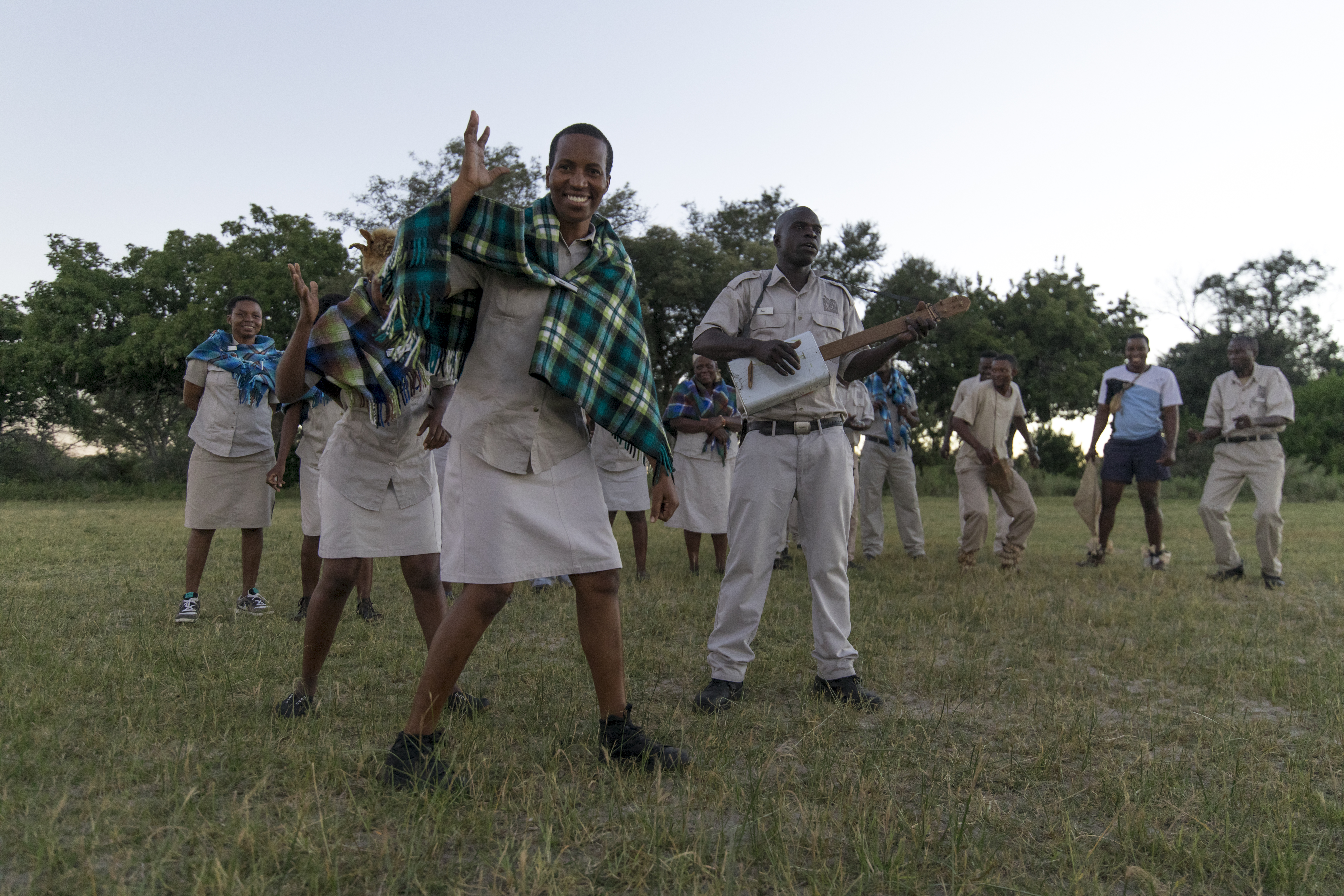 Simon leaves our trip early for another shoot in the Kruger National Park. “Matt, it is up to you now to take the good photos. I have no doubt you will disappoint me,” Simon says before he goes.

On our last evening game drive, we get a call on the radio that a leopard has been seen. In dying light, we race through the Savute Game Reserve bouncing along in excitement. The sun has disappeared over the horizon and we have to be back at camp in ten minutes before the park closes. I realise that I might only get one chance to photograph the leopard.

We arrive in a puff of dust and slow the vehicle down as we near the sighting. We see pointed fingers from another vehicle and see it; a movement of grass and a flash of a tail – the leopard is here. And then, before we can even settle, the leopard appears in front of us casually strolling towards the start of its night. I take a photo and look at it. It’s dark – way too dark.

The leopard is nearly in front of us now and I consider forgetting the camera and just admiring the cat. But no, I must try to capture it. Do I change the shutter speed, ISO or F-stop? It must be the ISO, the sensitivity of the image sensor. But to what? The leopard is disappearing and I have no time to test it. I guess 1600 ISO, lift the camera, aim, take focus and shoot. I get it! I think. I can’t be sure. The leopard stalks off into the night. 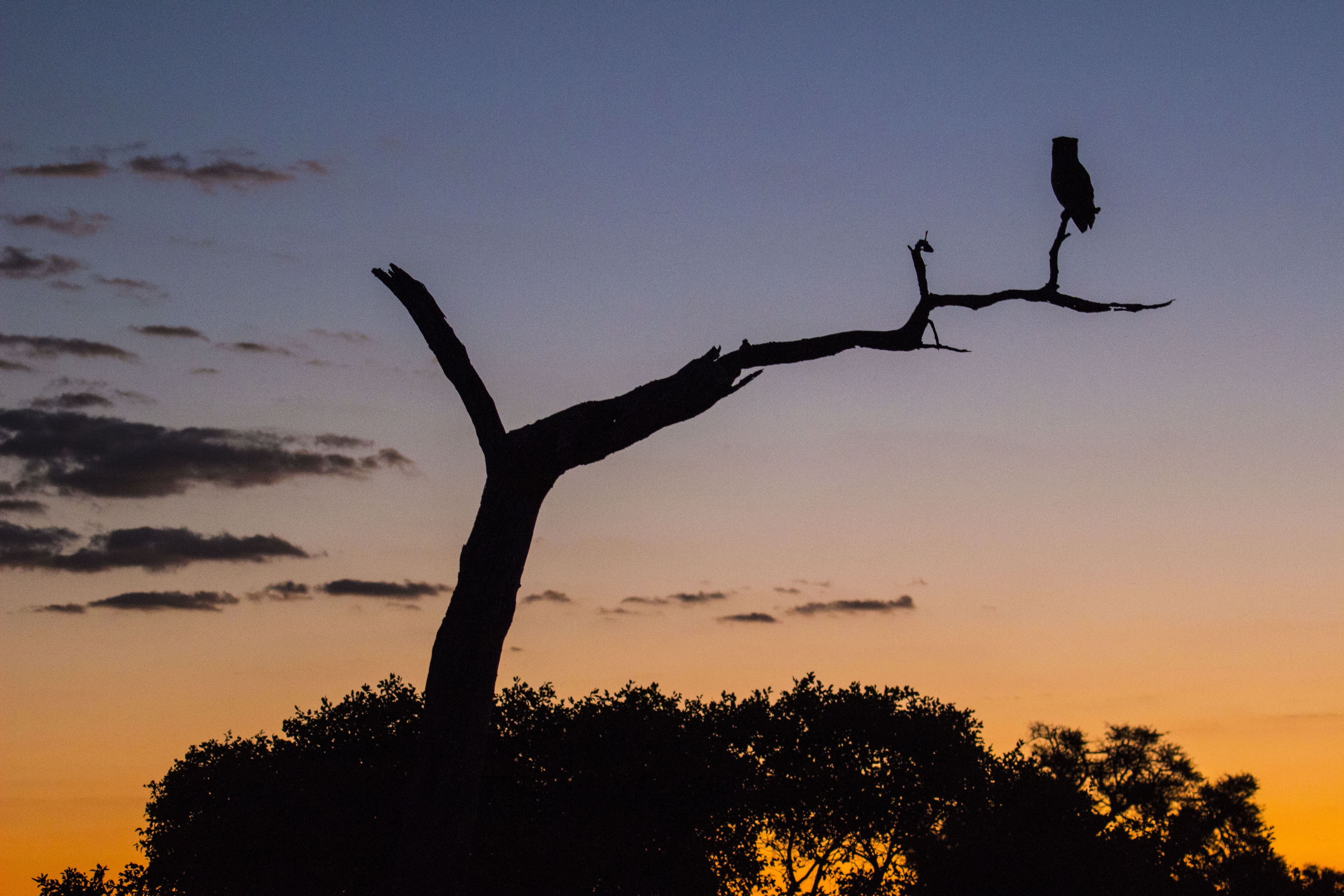 A week later and back at the office, Simon and I take a closer look at the photo. Simon doesn’t like it. “I can’t use that,” Simon says.
“I don’t care if you can’t use it.”
“Look how grainy it is. You pushed the ISO up too far, you should have shot on 800.”
“Maybe,” I say, “But I like the photo. I think I might frame it.”
“Yeah,” he says, “You would.” Simon walks off and then returns. “It’s not a bad photo. You should be happy with it.”
Simon walks off again and I feel like he is the one patronising me now.

Lesson No. 5: Take the photos you like and don’t listen to a word Simon says

The Top 10 Most Instagrammable Places in Africa

The Top 10 Most Instagrammable Places in Africa