Whale, whale, whale, what have we here? Yes the Big 5, Table Mountain, and a spectacular flower season, but this month we celebrate the whale season in South Africa and the gentle giants of the sea as they grace our coastlines with their presence. Brush up on your lingo, and watch several different types of whales showing off their breaching, fluking, lobtailing, logging, spouting and spyhopping from the comforts of the South African shore. It really is an over-whale-ming experience. Migrating from their feeding grounds in Antarctica to the safe, warmer and nurturing shores of Cape Town, it’s a whale baby boom around this time. 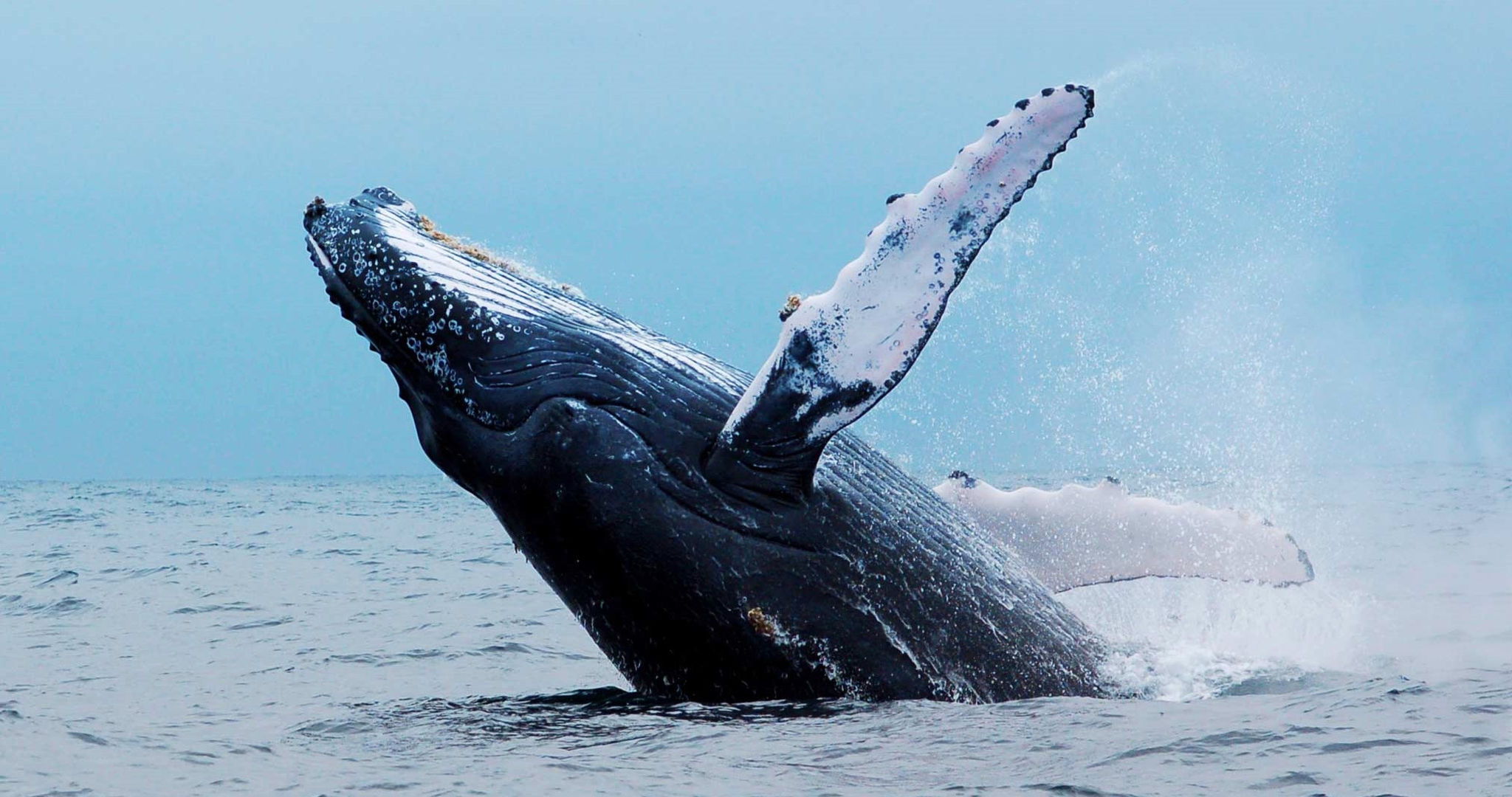 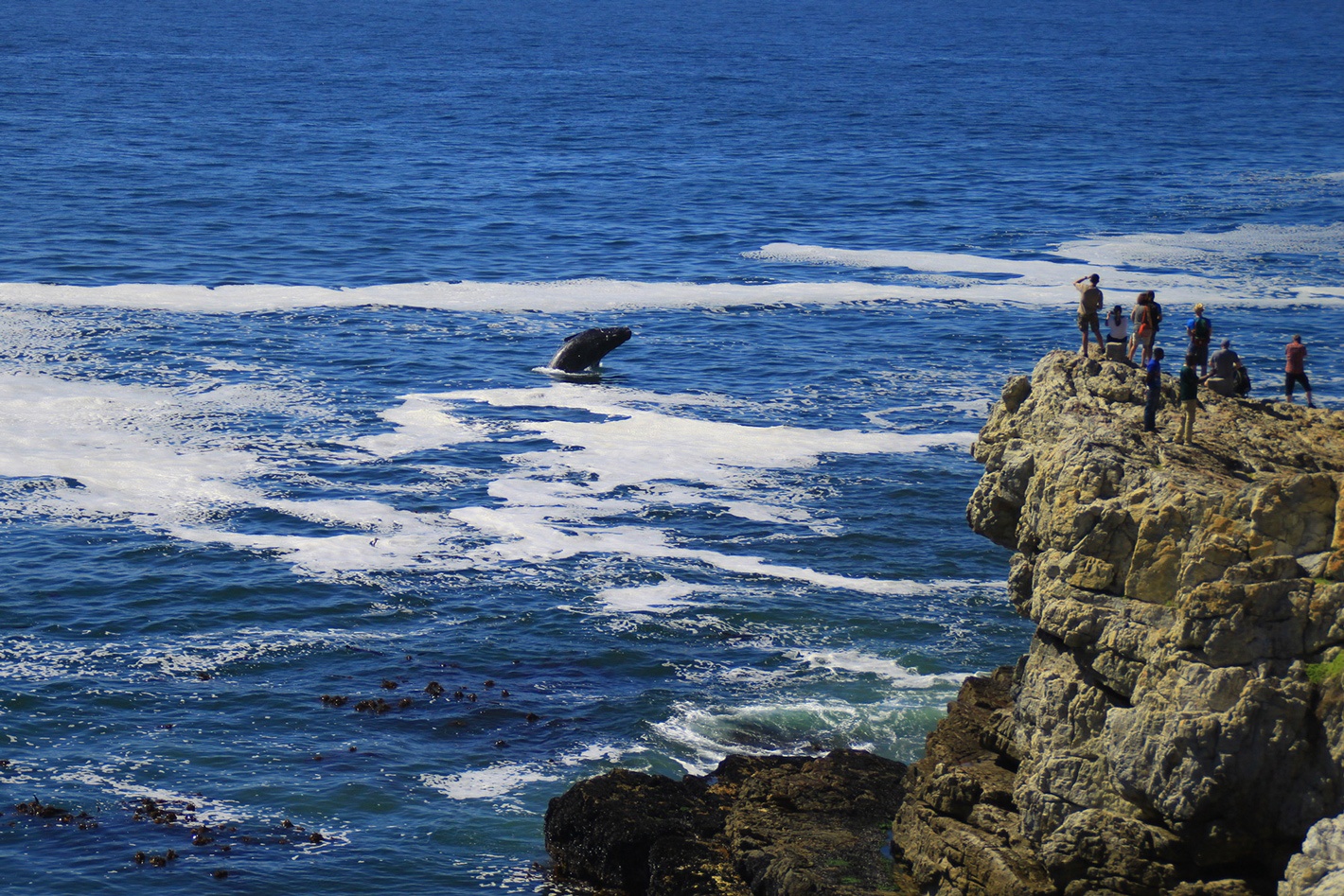 When can you see the whales?

Marvel at the Southern Right, Humpback and Bryde whales and their unrivaled power during their water aerobics between June and November of each year. This six month window gives you enough time to explore the South African coast line and its quaint towns, while catching incredible views of the whales. This season also overlaps with the wildflower season in the Western Cape, the perfect opportunity to hit two birds with one stone. You’ll whale if you miss these phenomenona!

Where is the best place to see the whales?

South Africa undoubtedly has the best land-based viewings of these beautiful creatures frolicking in the water only metres away. Following the Whale Route, on South Africa’s West Coast and East Coast, is the scenic way to see the whales, while meandering through small towns full of charm. Here are some of our favourite whale viewing places:

Hermanus, the whale capital, was ranked in the top 12 whale watching locations in the world by the World Wildlife Fund.  Only a two hour drive from Cape Town, this little town is the heart of the Whale Route. Watch as whales come within metres of the shores, and join in on the festivities of the annual Hermanus Whale Festival (this year held on the 29th of September until the 1st of October 2017). Great viewings can be had from terraces such as Old Harbour and Gearing Point and other great spots include Gansbaai, Grootbos Nature Reserve, Dreunkrans, Siever’s Point, VoelKlip and Grotto beaches.

In and around the Cape Town area lies the picturesque False Bay. With many roads hugging the coastline and on higher points, you’re bound to catch great sightings of the giants of the sea. Roads such as Boyes Drive, Clarence Drive, Chapman’s Peak, Jager’s Walk, Baden Powell Drive and Cape Point are some of the best routes on which to see the whales. Self-drive through the many meandering roads in the Cape Town region with this guide: Dreamy Drives- Roadtrips Around Cape Town. You can even catch great views of the whales just sitting at coastline restaurants, such as The Brass Bell in Kalk Bay.

Embark on a five-day Whale Trail walk, which transverses the De Hoop Nature Reserve and Marine Reserve, one of the Western Cape’s most beautiful and unspoiled coastlines with whale nurseries spread across its’ shores (Note: the Whale Trail needs to be booked at least a year in advance). Only three hours out of Cape Town, explore the beautiful, diverse and fynbos-filled nature reserve, breathing in the salty sea air and staying at comfortable accommodation along the route. Over 50 whales have been spotted together mere kilometres from the coast.  Close by lies the idyllic coastal village of Arniston, another great whale watching spot and a must-see if in the area. 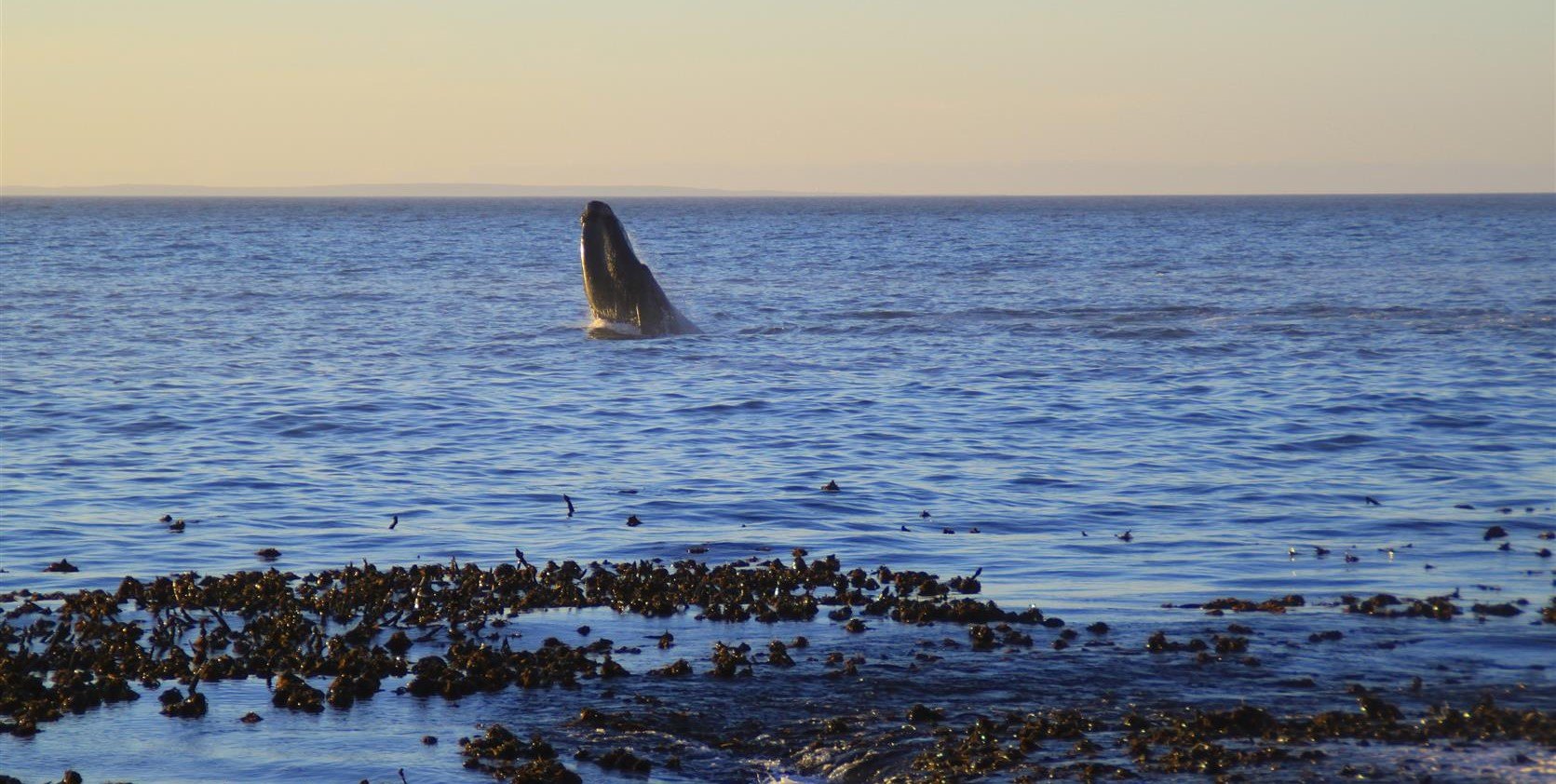 The Garden Route is a long and scenic chunk of South Africa’s southern coastal region, the perfect route for a leisurely drive. Visit quaint coastal towns and enjoy the diverse floras against the dramatic rocks and turquoise sea. Great whale viewing can be done at Wilderness at Dolphins Point, Map of Africa view point, Wilderness Beach, Leentjiesklip and Flat Rock Beach. The seaside town of Knysna also offers panoramic views of the ocean from points such as The Heads, Noetzie and Brenton-on-Sea. Further up the coast lies Plettenberg Bay and Mossel Bay more great towns to explore and providing breathtaking views of the whales on their journeys. You really are spoiled for choice when it comes to the Garden Route. 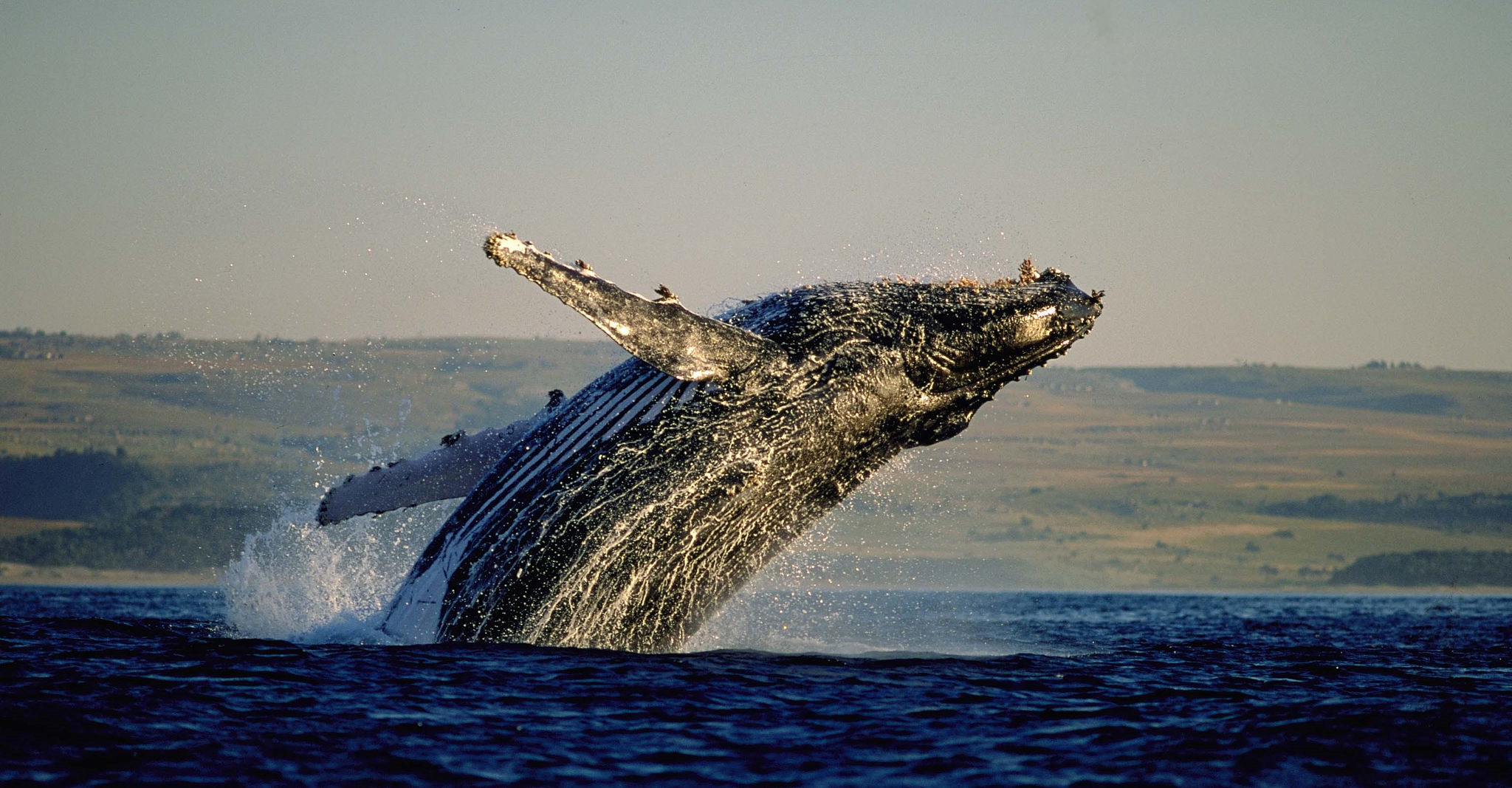 What types of whales can you see?

Courting, nursing and playing, the whales are really going to be showing off for you. It’s handy to be able to identify which whales you might be seeing. Some are rarer than others, so make sure you are able to distinguish them apart. Here are three types of whales you might see as well as other sea life:

The southern right whale’s most distinctive feature are the callosities on its’ head. The callosities patterns formed on their heads are individually distinctive, so look out for southern right whales you may have previously spotted. Another important feature to note are their fan-shaped flippers which they may decide to wave at you. These giants are 15m in length, can reach weights of at least 100 tons and are mainly black in colour. White patches can be seen on their bellies and on the odd occasion on their backs. They have large heads, a bowed mouth-line, a snout which is very narrow and broad flukes. Hopefully the southern right whale is friendly this season and puts on a performance for you.

The most confident and common to visit our coastline are the humpback whales, migrating towards Mozambique and Madagascar to breed and calve. They can be identified by their robust bodies, humps and their long and bumpy pectoral fins (up to one third of its’ bodies length). Their flukes are concave and have a serrated edge, and their small dorsal fin sits on their hump on their lower back. The anterior of their mouths are covered in bumps, each containing a single sensory hair follicle. This black or dark grey bodied creature also has white underneaths (underneaths of belly, pectoral fins and fluke) and can reach lengths of 16m and weights of 35 tons.

These are the shy giants, making their way up our shores and are often more difficult to find due to longer diving times (up to 20 minutes to depths of 300m). A distinguishing characteristic is their 40 to 70 throat pleats, as well as the three ridges near their blow hole. Their dorsal fin rises abruptly out of the back and is tall. They often exhale under water and so a little blow or no blow at all makes them harder to spot. They are present all year round, reach up to 15m long and can weigh up to 25 tons.

South Africa is not only home to the Big 5, but also The Marine Big 5. While you’re watching the water aerobics performance of the whales look out for pods of many dolphins, Cape fur seals, great white sharks and the cute African penguins.

Brush up on your whale lingo

For those with sea legs

There are many opportunities to view the whales from boat, giving you a different perspective and potentially catching closer sightings of the marine life in South Africa. Please ensure you check with the boat company that they have a license for approaching whales.

Some facts about the gentle giants of the sea

Silvan Safari – A Story of Serenity and African Spirit

Silvan Safari – A Story of Serenity and African Spirit