Hyena vs. Wild Dog | How Different Are They Really?

For centuries there has been confusion between similar-looking animals, such as cheetahs and leopards or crocodiles and alligators. Now we broaden our scope to look at two other animals suffering from a case of mistaken identity, the hyena and the wild dog. We’ll focus here on the African wild dog and the spotted hyena, just to avoid even more confusion! Once you venture out on safari, you’ll be certain which is which with our five helpful comparisons.

In terms of ears, the wild dog has more rounded spade-like ears that stand up, as if listening for predators. On the other hand, the hyena draws its smaller ears back towards its head.

The wild dog is also known as ‘the painted wolf’, owing to the patterns on its coat that resemble a random array of paint splashes. These splashes or patches vary between white, ochre and black colour palettes. It’s counterpart, however, (being the spotted variety mainly found in South Africa) has a brown-coloured coat with small dark brown spots dotting it all over. It also has a mane-like hairline along its spine that is longer than the rest of its fur.

Hyenas are generally more aggressive creatures, spending most of their time fighting amongst each other. They are also nocturnal creatures, which may be the reason they are mistakenly seen as scavengers by most people. The wild dog tends to be elusive as they are more wary of stronger predators. Being team players, they tend to be more caring about other members of the pack, never leaving anyone behind. 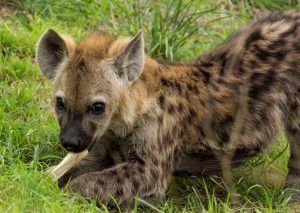 Female dominance can be observed in both packs with hyenas being more competitive over food sources. Wild dogs work together on every aspect of pack life, even raising all of their pups collectively.

Both creatures make dens in the ground or in smaller rock enclaves where they sleep and give birth. Female hyenas, interestingly, leave the den of the clan and make a new den where they can birth their cubs in private. Wild dogs tend to move their dens around according to predator threats or hunting grounds where they can teach their pups to hunt.

Now that you know all there is to know about these two species, you’ll find there are in fact similarities but that ultimately they have a very complex individual make up. Read more about how you can help the future of wild dogs with Wildlife ACT.

6 responses to "Hyena vs. Wild Dog | How Different Are They Really?"