From the San people of South Africa all the way up to the Berbers in Morocco, Africa is the origin of myriad tribes – in fact, there’s estimated to be about 3,000. With so many unique groups comes quite a few fascinating tribal traditions. Some we’ll never know about, but others we’ve been lucky enough to catch a glimpse of. These seven tribal traditions are just a small part of what makes the people of Africa so spellbindingly colourful.

1. The courtship dance of the Wodaabe 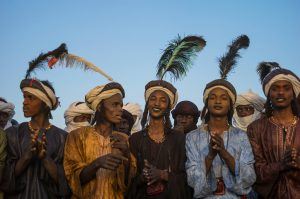 Birds do it. Bees do it. We’re talking, of course, about a courtship dance. In the Wodaabe tribe of Niger, the human mating ritual takes a page from nature’s book. The Guérewol is an annual ritual and competition that sees young men dress up in elaborate ornamentation and traditional face paint and gather in lines to dance and sing. The goal? To get the attention of one of the judges – a marriageable young woman. In this particular tribe, the male beauty ideal is all about bright eyes and teeth, so men will often roll their eyes and bare their teeth to show off their sex appeal.

2. The lip plates of the Mursi 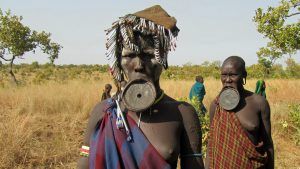 The Mursi tribe of Ethiopia is one of the last tribes in Africa where it’s the norm for women to wear large pottery or wooden plates in their lower lips. When a Mursi girl reaches the age of 15 or 16, her lower lip is cut by her mother or another older woman in the settlement. The cut is held open by a wooden plug for about three months while it heals. Mursi members are rather egalitarian – girls are never forced to have their lip pierced; it’s a totally personal choice. (Of course, 16 is the prime age for peer pressure no matter your culture, and this is often the reason girls opt for the lip plate.)

3. The bull jumping of the Hamar 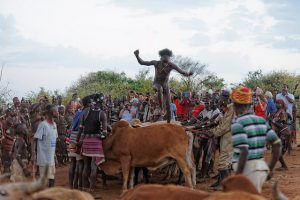 Ethiopia’s Hamar tribe (also known as the Hamer tribe), made up mostly of pastoralists who respect and treasure their cattle, has a rather… athletic initiation ritual. Forget cow tipping – this tradition is all about the art of bull jumping. Bull jumping is a three-day rite of passage that all boys must partake in, and it’s extremely important for the dignity of both the initiate and his family. The initiate must walk over 15 castrated bulls that have been rubbed in dung to make their backs slippery (and the task that much tougher). If he fails, he’ll have to wait a whole year to try again. And if he succeeds? It means he’s ready to marry a girl of his parents’ choosing, and to raise his own children and cattle.

4. The red ochre of the Himba 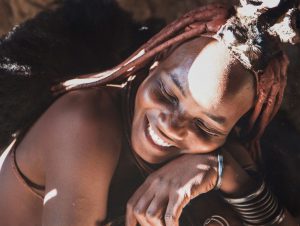 The women of this iconic Namibian tribe are known for their beautiful, red-tinged skin and hair. The reason for the rich colour? A homemade paste of butter, fat and red ochre known as otjize. Girls in the tribe start using otjize as soon as they’re old enough to care for their own hygiene. There has long been speculation around exact origins of the practice, with many people claiming it acts as sun protection or insect repellent. But the Himba tribe says it’s purely for aesthetic reasons – effectively a traditional make-up they apply every morning in the same way we’d slap on a lick of mascara and lipstick.

5. The spitting of the Maasai 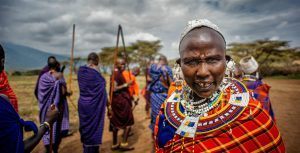 The Maasai people of Kenya and Northern Tanzania view spitting as a form of blessing and a sign of respect. Tribespeople use spitting to greet or say goodbye to friends, clinch a bargain or to wish someone good luck. Two friends greeting each other will spit in their palms before shaking hands. When a baby is born, family members will spit on the child to wish him or her a long life and good luck. Spitting is also customary on a daughter’s wedding day, where her father will spit on her forehead to wish her a blessed union.

6. The healing dance of the San 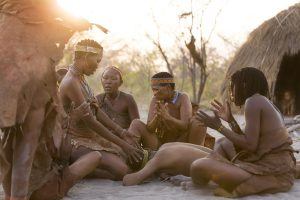 Of all the tribal traditions, this one is arguably the most magical. For the San people of South Africa, Namibia, Botswana and Angola, dance is considered a sacred power. One of their most integral tribal traditions is the trance dance (also known as the healing dance). The whole community comes together around a fire for several hours or even an entire night, led by healers and elders. The healers dance around the fire, chant and hyperventilate until they induce a powerful trance-like state. In this state, they are granted access to the spirit world (and are often able to walk over fire). The San healers aren’t just doing this to cure physical illnesses in their community – they also attempt to expel what they call “star sickness”, a force that causes jealousy, anger and arguments.

7. The wedding ceremony of the Ndebele 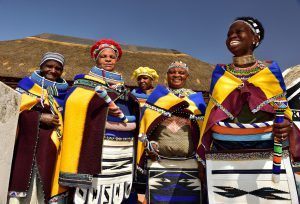 The Ndebele wedding ceremony is all about the bride – and her attire puts western white dresses to shame. This, in most part, is thanks to her future mother-in-law and the prettiest of all the tribal traditions. The groom’s mother creates a Jocolo for the bride – an apron made of goatskin and decorated with gorgeous, colourful beads. The Jocolo is worn by all married women at the wedding ceremony, and is representative of a mother surrounded by children. On their wedding day, the groom performs a ceremony in honour of his new wife, giving her thanks and credit for everything she’s done for him in their time together.

If you want to know more about African tribes and their tribal traditions, take a look Step back in Time with the Zu/’hoasi Bushmen of Botswana before planning your trip to see these incredible sights with your own eyes.

Everything Lesley has done has been for the love of language – she studied journalism, spent a few years writing for magazines and followed her wanderlust to South Korea where she taught English. Don’t assume writing is her only talent – she’s also wildly skilled at pairing any reality show with the perfect glass of wine. When she’s not on the hunt for people to beat at her ever-growing collection of board games, she’s seeking beauty out in nature (a very easy pastime when you live in the world’s prettiest city).