Is Victoria Falls Drying Up?

Victoria Falls is one of the most popular must-see sights in Southern Africa. Named one of the Natural Wonders of the World and a UNESCO World Heritage Site, there is nothing quite as mesmerising as this magnificent body of water – lovingly known to locals as Mosi-oa-Tunya or the “smoke that thunders” – falling rapidly over the top of the canyon more than 100 metres below.

Since Livingstone’s day, the region has reimagined itself as the definitive adventure capital of Africa, a hub for all things high-adrenaline – but more on that later. Today, you can fly into either the town of Victoria Falls in Zimbabwe or its Zambian counterpart in Livingstone and cross back and forth fairly easily (with passport in hand, of course). We believe the views are better from the Zimbabwean side, and the country’s 2009 adoption of the United States dollar means you won’t have to worry about exchanging money, so it would be easiest to spend most of your time in the town of Victoria Falls. 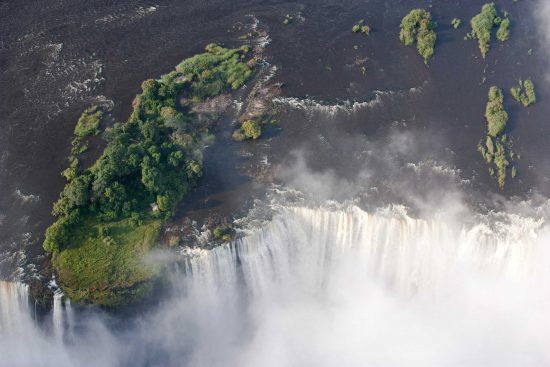 Over the past few months, however, pictures of a supposedly bone-dry Victoria Falls were snapped and circulated globally of the eastern cataract on the Zambian side, which sits at a higher elevation and often runs low for a few months each year – a phenomenon known as “Victoria Walls.”

While climate change continues to be a growing concern for us, what has been lacking in these recent media reports of Victoria Falls ‘drying’, is a nuanced insight into the seasonal rainfall patterns, and the resultant changes in water flow, that are vital pieces of information to ensure a clear perspective is maintained. 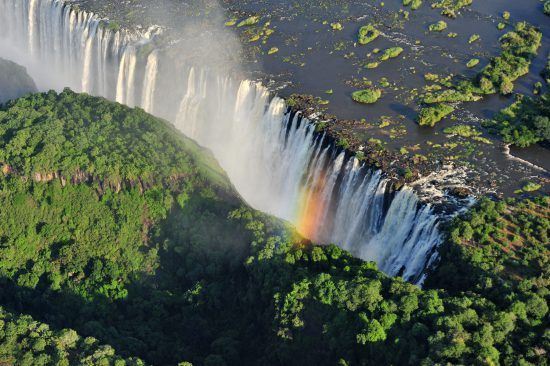 Vanish beneath the mists of Victoria Falls

All things in nature follow a cycle of ebb and change. And Victoria Falls is no different.

The Zambezi River, which feeds into the Falls is subject to large seasonal fluctuations, determined directly by rainfall in its entire catchment basin. As it is, water collects in Angola and Zambia during the rainy season (December to end April) and it begins its eventual slow meander down the Zambezi River towards Victoria Falls.

During the dry season, water levels drop, exposing the rocky surface from the Zambian side, which is on a slightly higher level than the Zimbabwean side.

Historical figures show that on or around 14 November the river is at its lowest and then gradually starts to rise again around 14 December, once the localised rains start having an impact on the Zambezi River.

When’s the best time to visit? 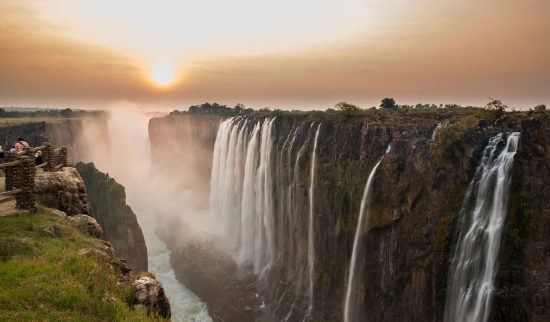 The high water season runs from January to early May, when the Zambezi River is at full flow. The resulting spray is so dense that, at times, the view can be obscured. Don’t worry though, frequent gusts of wind ensure regular viewing is quickly restored. And if you’re lucky to be there during a full moon, you might be able to catch a moonbow (a nighttime version of a rainbow) in the spray.

For the average holiday traveller, Victoria Falls provides an absolutely awesome experience, whilst for the adventure-seeker, this is the best time for white water rafting on the Zambezi. Elsewhere, it’s imperative to try a hand at bungee jumping or swinging off the 330-foot bridge straddling the river. Although it’s not the highest bridge bungee jump in the world – that title belongs to a bridge in South Africa – it’s arguably the world’s most scenic. For something slightly less intense, consider riding the zipline across the gorge.

But low water season brings its own treasures. Specifically, atop the falls, tucked away in a small sliver of space next to Livingstone Island, sits a teeny, tiny pocket of water known as the Devil’s Swimming Pool. It is there that adventure-seekers can dive in, be pushed to the brink of disaster, and hang over the top to check out the death-defying view. The pool is only accessible during the dry months from mid-August to mid-January, as the river’s levels drop substantially to reveal the pool below.

Discover the most inspiring sight on the continent 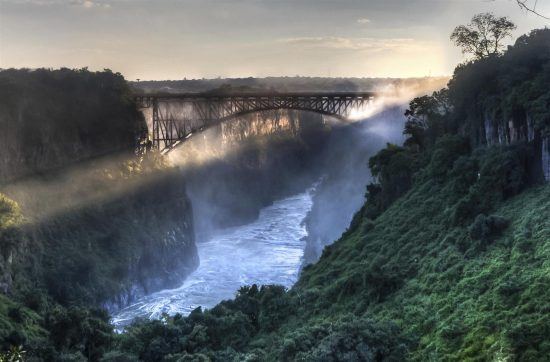 While Zimbabwe has indeed experienced lower rainfall over the course of 2019, the water levels of the Zambezi, and indeed the flow levels over Victoria Falls, have remained above those recorded over the drought period of 1995.

For those who have been alarmed by the recent reports and somewhat sensationalised headlines, the good news is that the current records from the Zambezi River Authority are showing that water levels are once again on the rise. As we speak, water has started to flow over Victoria Falls’ drying eastern cataract, much like it always has, and much like it always will.