The past week has seen a continuation of our great leopard sightings, keeping us all thoroughly entertained. Tiyani, Ntzutini & Hukumuri have all been spotted around our Silvan Safari Lodge itself, but that’s a story for another day. Today is all about the buffalo buffet.

After a brief first sighting of some of the Nkuhuma lion pride when we first arrived back, they moved off south of our border so we haven’t been able to properly catch up with the whole pride. I was very keen to see how many of the youngsters have survived lockdown and properly assess how they fared. We kept all eyes and ears alert for the telltale signs they had moved back onto our property.

Waking up to the sound of roaring lions

We didn’t have to wait too long as not even a week later were woken early in the morning to the sounds of lions roaring. It sounded fairly close and we suspected (and hoped) that the Nkuhuma pride was back on the southern border. So we headed out well before sunrise to try to find them. 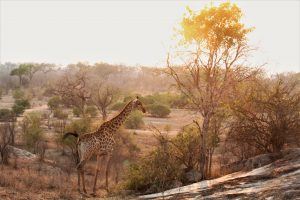 The golden glow of the African sunrise at Silvan, Photo Credit: Steph Hornsey

As it so often happens in Africa, we came around a corner and almost drove into the pride of lions spread out over the road. Like being reunited with old friends, we were thrilled to be back with the Nkuhuma pride. And even better, they had taken down a buffalo during the night too. Doing a quick count we found that all the cubs had survived lockdown and all eighteen lions were here and looking healthy and strong. This pride consists of two male, seven females and ten youngsters from two separate litters and if most of these cubs survive, it will make this an incredibly powerful pride in the near future. 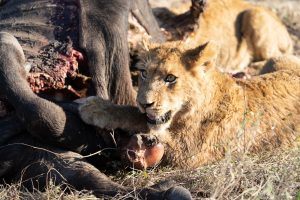 One of the youngsters enjoying the feast, Photo Credit: Kyle Olivier

When we arrived we found that most of the adults were taking snooze, having clearly fed through the night. The cubs were taking the opportunity to feast on the carcass and were fighting over the good bits and playing around the buffalo buffet. As we sat there, the usual scavengers of the bushveld were already sneaking and skulking around. The vultures had started circling and the hyena were lurking in the thickets waiting patiently for the pride to move on so they could take over.

A kill sighting is always interesting

One of my favourite times in the bush are those where you don’t need to rush on, you can sit patiently with the animals, enjoying their relaxed nature and soaking up the experience. We were spoiled by an array of interesting interactions between the pride members and witnessed how quickly the adults disciplined the youngsters when they tried to test boundaries. 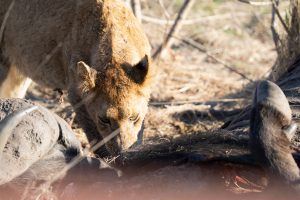 There is always lots to watch at a kill sighting, the animal interaction is incredible, Photo Credit: Kyle Olivier

Even though seeing a kill is not for the faint hearted, it does show nature at its most raw and gives a great visual reference of “survival of the fittest”. After almost two hours spent just watching these amazing animals, it was time to move on and get that the first coffee of the day!

Kyle is one of our field guides at Silvan Safari. He has a huge passion and interest in studying animal behaviour and has a particular interest in the leopard. He is a keen birder who loves seeing which rare and interesting species can be found on the reserve. With a developing interest in photography, Kyle is always on the lookout for the next, newest and best possible shot.