Gorillas in the Mist: PART 2

How manic the last two weeks have been!

Rwanda was everything I had hoped for and more. A country that has beaten all odds to emerge from un-imaginable darkness – a truly inspirational place. One can only feel joy, as this is a success story in conservation, against the odds of poaching, genocide and a burgeoning human population.

Billy, Angela, my dad and myself set off for Kigali on Wed the 21st of March aboard a four hour flight from Johannesburg. Kigali is a bustling city of some 800 000 people, reminiscent of the rolling hills of Kwa Zulu Natal. What struck me most was that despite the poverty and mass unemployment, the city and countryside were exceptionally clean, and clear of litter. This is probably due to the ban of the use of plastics, an eco-friendly policy that is truly remarkable in the face of such abject poverty.

There is not a whole lot to do in Kigali other than to visit the Genocide memorial, which is a truly remarkable place. The museum is somber as one would expect, but details Rwanda’s past, present and future, with specific reference to the genocide and the gruesome events that lead to the 1.2 million deaths in 100 days in 1994. Something I cannot understand is how our world leaders go to sleep at night knowing the atrocities they have both directly and indirectly inflicted on the people of Rwanda.

The upper level of the museum includes a memorial to genocides around the world – a startling reminder to our past and a continued hope that humanity should never have to suffer the likes again. Walking around the mass graves that lie in front of the memorial was a sobering moment – it was then that I realised how truly remarkable the people of Rwanda are.

The Gorillas are the main reason we came to Rwanda, so off to the Volcanoes National Park we went. There is not a great deal of choice when it comes to accommodation, but Gorillas Nest Lodge made a great base. Finding gorillas is no walk in the National Park, so we thought we would acclimatize with a short walk to find the Golden Monkeys first. The Golden Monkeys were thought to be extinct, until a few popped up in the Volcanoes National Park in around 2000, with two groups being habituated in 2003. Not the easiest of primates to track or photograph, the troop provided us with lots of entertainment as we spent an entire hour walking with them while successfully avoiding the forest elephant and buffalo. 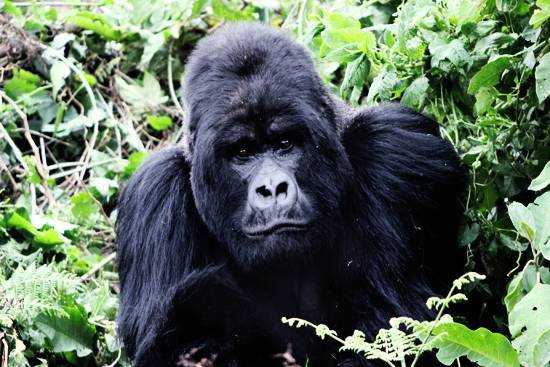 When Gorilla Hour came it was one of pure joy – although tracking them took some doing – of course our silverback – Guhonda, aged 34 was a star turn, but it was the babies and teenagers who best illustrated the uncanny relationship between man and ape. There are about 8 Gorilla families in the Park, but you have to earn your Gorilla! The Susa Group, with which Dian Fossey worked, is up a vertical volcano slope – and that’s before you get to the forest. The Sabyinyo Group that we tracked was a little more accessible, but one still needs to be fit – hiking fit.  Having adapted to the altitude you need the right equipment against sun, rain, mud, hunger and stinging nettles. There is a lot of mud – In fact I think they got the name wrong – it should be Gorilla’s in the Mud !!  – so don’t skimp on the boots.

After all that walking, a couple of days rest at the nearby Lake Kivu Hotel is welcome reward. Lake Kivu is a wonderful destination to just relax unwind and enjoy your private beach on what is truely a magnficent lake. We will be adding a comprehensive Gorilla Trekking section to the Rhino Africa websites in the not too distant future – Gorilla Trekking is the ideal add-on to your East or Southern African Safari and we would be delighted to assist you in the planning of your holiday in the interim.